‘Eat Like A Luchador:’ A Book of Meals and Mascaras 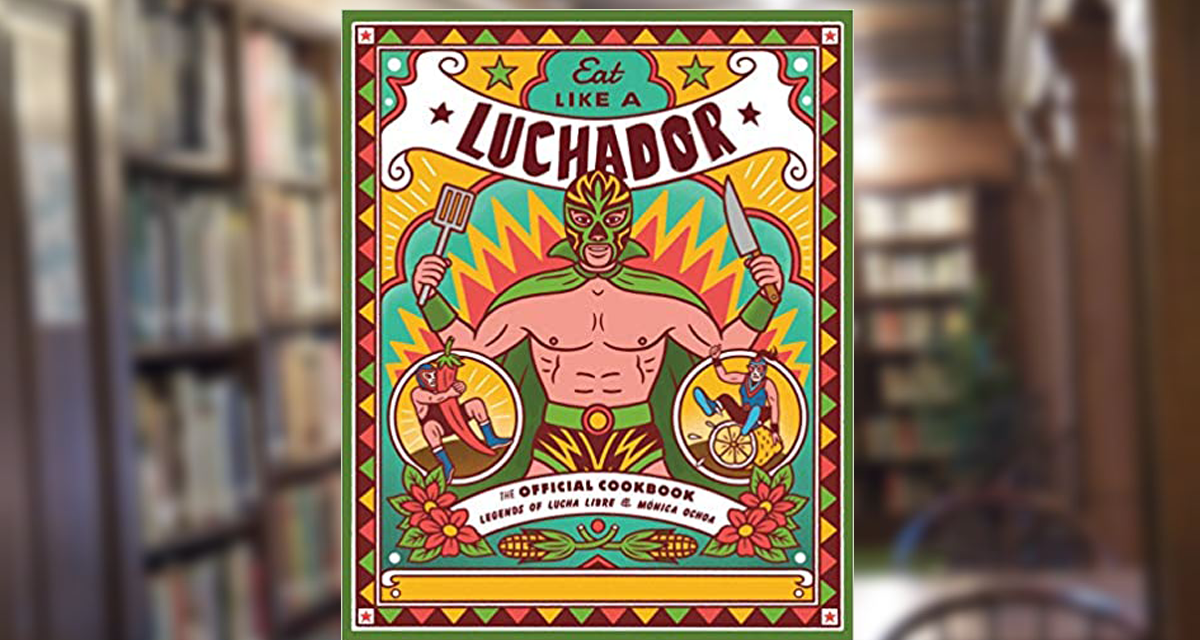 Growing up, my family would always travel on Sundays to visit my grandparents in Ogden, Utah. As soon as I entered the door, my grandma would greet us with hugs, kisses, and lots of food. My dad’s side of the family was always large, as various aunts, uncles, and cousins would come in and out of the door. This was a feeling I have forgotten, in part due to life keeps moving on. With Eat Like a Luchador: The Official Cookbook, out now from Running Press, LuchaCentral.com journalist Mónica Ochoa, along with the Legends of Lucha Libre, assembles a cookbook that celebrates food and family…with a lucha twist.

At 23 years old, Ochoa has been around lucha libre all her life. It helps her parents were also luchadors (Mexican pro wrestlers) as well. The daughter of Estrellita and Jerrito Estrada has very fond memories of going to the wrestling shows, and how her mother would take her to the dressing room of the luchadoras (female Mexican pro wrestlers), and the whole pageantry of the events. In the cookbook she wrote, “Part enamored with the show of it all, part wanting to follow in my mother’s footsteps, I know that I wanted to do something in the business.” While her mother stressed focusing on her studies, Ochoa focused on studying communication, and worked towards a career that still allowed her to be near the family business. 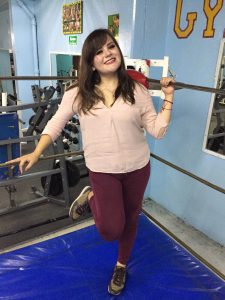 In the introduction, Ochoa notes that her favorite subject to cover is the importance of family in lucha libre. So how do food and lucha libre meet? “Because lucha libre is 100 per cent family at the shows, and the food [brings together] the family,” Ochoa pointed out. And what inspired the creation of this cookbook? “One of the most important parts of this has to show the part of the luchadors that you don’t see in the ring. You watch them wrestling; the technicos (a good guy/girl in lucha libre) and the rudos (a bad guy/girl).” Ochoa elaborated that what people don’t see are the stories of what those luchadors do outside the ring; the stories of those families and what they do to succeed in the sport and provide. “And I think that inspired me to show the people, the internal part of the lucha libre.”

The recipes collected in this cookbook feature lucha libre stars not just from Mexico, but even from the Southern California scene. Some highlights to check out are Sam Adonis’ Diabla Shrimp, Taya Valkyrie’s (now Frankie Monet in NXT) Loca Guacamole, plus All Elite Wrestling (AEW) stars Penta El Cero Miedo and Rey Fenix with their Chicken Fajitas with Bell Peppers and Mexaking Wrap respectively. But, sometimes, getting the recipes was the hard part of creating the cookbook, due to the luchadors’ schedules across the world. “To reunite (with) the luchadores,” Ochoa recalled, “was the hardest part of making this book. (But) only that, because talking to them, where they, they tell me about their story, their family’s story, (worked) very well.”

Of all the recipes collected in the book, the Pozole by Fulgor I and Fulgor II was Ochoa’s favorite. She noted the Fulgores (which means “glare” in Spanish) are her friends, and she talked about going to their house, and listening to their mom talk about the history of making the pozole. “I think it’s my, my favorite meal because pozole is so traditional here (in) Mexico.”

As for the strangest dish, Ochoa mentioned the Tinga de Zanahoria by Hades (which is usually made with chicken or meat), but in the cookbook the tinga is prepared with garrotes (or “carrots” in Spanish).“It tastes like chicken but it isn’t chicken,” said Ochoa. And, yes Virginia, there are other vegetarian recipes like Hades’ including Amy Dumas’ (the former Lita from World Wrestling Entertainment fame) Tlacoyo de Nopal. “The vegan recipes,” Ochoa explained, “replaced the meat, using vegetables, and I think it’s great. It tastes the same.” Now, replacing any meat would be considered a sin (in the case of my dad’s family), so it must be asked, how did Ochoa’s friends and family respond? “Vegan recipes are very strange here (in Mexico),” Ochoa admitted, “but I think the recipes are a good alternative, if you want to be healthy and never stop eating delicious things.”

So what advice does Ochoa offer anyone who decides to try out these recipes at home? “We use onions and garlic and chili in all our recipes.  So I think my advice is that if you want to try (them), please don’t use a lot the products.” She recommended instead to just use a small portion of garlic or onion, just for taste. But don’t forget the chilies. “Every Mexican dish has to have a chili,” declared Ochoa, “or is isn’t Mexican!” 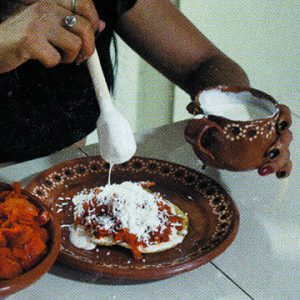 Excerpted from Eat Like A Luchador: The Official Cookbook by Legends of Lucha Libre & Mónica Ochoa. Copyright © 2021. Available from Running Press, an imprint of Hachette Book Group, Inc.

TO SERVE (OPTIONAL AND TO TASTE):

You won’t carrot all that there’s no meat in this main dish! While tinga — a dish composed of tostadas served with tasty toppings — is traditionally prepared with chicken or meat, this version is made with carrot to suit luchadora Hahastary’s (aka Hades in Lucha Libre AAA) vegetarian diet.

Prepared with a mélange of flavorful veggies and aromatics, and served with plenty of creamy sauce and cheese, you won’t miss the meat with this hearty veg-friendly dish. To make this recipe vegan, omit the sour cream and cheese or use vegan varieties.

Behind the Gimmick Table: Time to ‘Eat Like a Luchador’