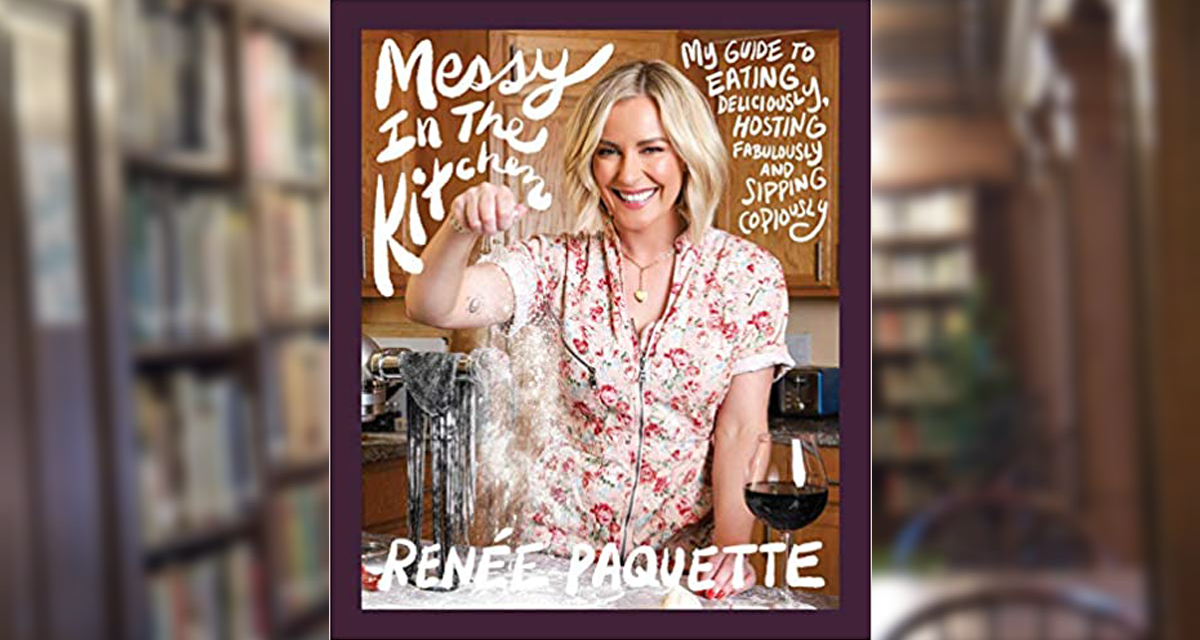 Manifestation is real. And for Renee Paquette, formerly Renee Young with World Wrestling Entertainment (WWE), believing that – and putting into the ether her dream of writing and publishing a cookbook – led to Messy in the Kitchen: My Guide to Eating Deliciously, Hosting Fabulously and Sipping Copiously.

Paquette initially discussed the idea of the book, which comes out today and is published by Permuted Press, an imprint of Post Hill Press, on her first podcast, Regular Girls, with comedian/actress Stacey McGunnigle. Paquette launched her current podcast, Oral Sessions With Renee Paquette, in November of 2020.

“I don’t believe I had written any of it at that point,” Paquette told SlamWrestling.net in a phone interview. “It was a seedling of an idea of a thing that I wanted to do. I had no idea what was entailed with writing a book.”

At the time, she had about 10 to 15 recipes and was writing blurbs to accompany them, while using “the power of Twitter and Instagram” to try and make her book a reality.

“I was really trying to make it come to fruition,” Paquette said. 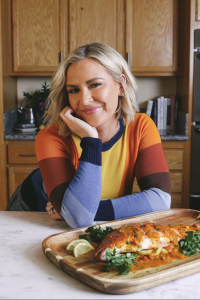 Paquette’s agent knew she wanted to create a cookbook, but the former WWE personality was still “trying to connect the dots” on her own. Then she met literary agent Amanda Luedeke, who, as a wrestling fan, understood the fan base and knew how well wrestling books sold. Luedeke, according to Paquette, helped bridge the gap.

“A lot of people assumed it was going to be healthy wrestler recipes and it’s not,” Paquette said. “It’s not.”

A cursory glance at the glossary proves this – with creations ranging from seafood squid ink pasta to cinnamon rolls.

But when she connected with Post Hill Press, they saw her vision and were “completely onboard.”

“It’s been such a cool experience of working with them,” Paquette said. “Coming from the world of WWE, many people know it can be quite micromanaged… it was really nice to step outside of that and reconnect with my own voice writing wise.”

And aside from some light editing, the words on the printed page are truly hers.

“I think it really came naturally to me,” she said. “Obviously, I put thought behind it… but one thing that really helped me leading into this was having written some of my own scripts for TV before.”

Once she secured a publisher, Paquette had three months to complete the book.

“It was just nonstop, nose to the grindstone trying to get everything done,” she said.

And then – the COVID-19 pandemic hit, causing “a little bit of a trying time” in figuring out what to create. Paquette herself contracted COVID-19 last summer.

While she said she tried to avoid referencing the pandemic in the book, one recipe – lamb burgers – was a direct result of the pandemic.

“If you recall, getting your hands on some ground beef during this time was near impossible,” Paquette wrote. “So it forced me to go a little out of my comfort zone and try different meats. It was either that orrrrrrr just cram mac and cheese down my yap.”

Paquette also spent about one-third of the writing period in Florida, going back and forth between Jacksonville and Orlando, writing and creating recipes in a kitchen that wasn’t hers.

She had to order supplies on Amazon and try to make do with what was available.

“This was definitely like I backed myself into a corner,” she said.

Photography throughout the book features not only Paquette and her creations, but vinyl records, her borderline Instagram-famous pups Benny and Blue, and, of course, her husband, pro wrestler Jon Moxley. Paquette and Moxley are also expecting their first child.

“I feel like this book is me wrapped up into recipes and into photos,” Paquette said.

It also has a “scrapbooky” feel to it, she said, with wine glass stains and pages that look like they’re taped together.

She also incorporated playlists as part of the hosting experience – another way to bring her own personality and style to the creation – reaching out to friends she trusts musically, from the Bella Twins and Nia Jax to Paige and Michael Cole.

“I think music really sets the tone so dramatically,” she said.

Each chapter introduction features celebrity quotes – from Miss Piggy to Dolly Parton to Orson Welles – at the beginning of each chapter. It was Paquette’s “fun and colorful way” to bring even more of her personality to the pages.

The bulk of the recipes – breakfast, main course, drinks  – are Paquette’s own creation, inspired by her personal tastes with a dash of new takes on old staples.

Recipe courtesy of Messy in the Kitchen: My Guide to Eating Deliciously, Hosting Fabulously and Sipping Copiously by Renee Paquette. See below for a better printout of the recipe!

“French onion soup was a recipe I wanted to add to this lovely culinary novel, which you are currently holding, but that seemed a little too straightforward for me,” Paquette wrote, “so BLAM- MO…I made that salty, oniony delight into a freaking sandwich. The best part of French onion soup is the bread and the cheese anyways, am I right?”

“When you hear anchovy popcorn… [you think] fishy popcorn, but it’s not fishy, I promise,” Paquette said.

Once the anchovies are cooked down, there’s a “great umami garlic flavor” left.

“Jon (Moxley) was sort of my measuring stick on what worked and what didn’t work,” Paquette said.

But she also made a point to include family recipes – specifically her nanny’s scotch eggs.

“To me, cooking really is about bringing family together,” Paquette said, “and I love a good passed down recipe. I hope to be able to do the same thing for my daughter.” 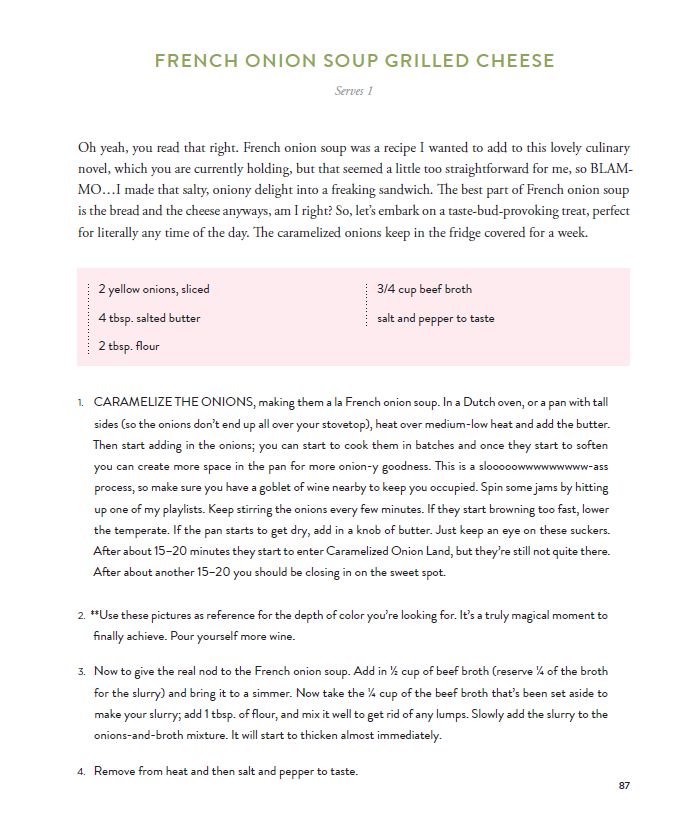 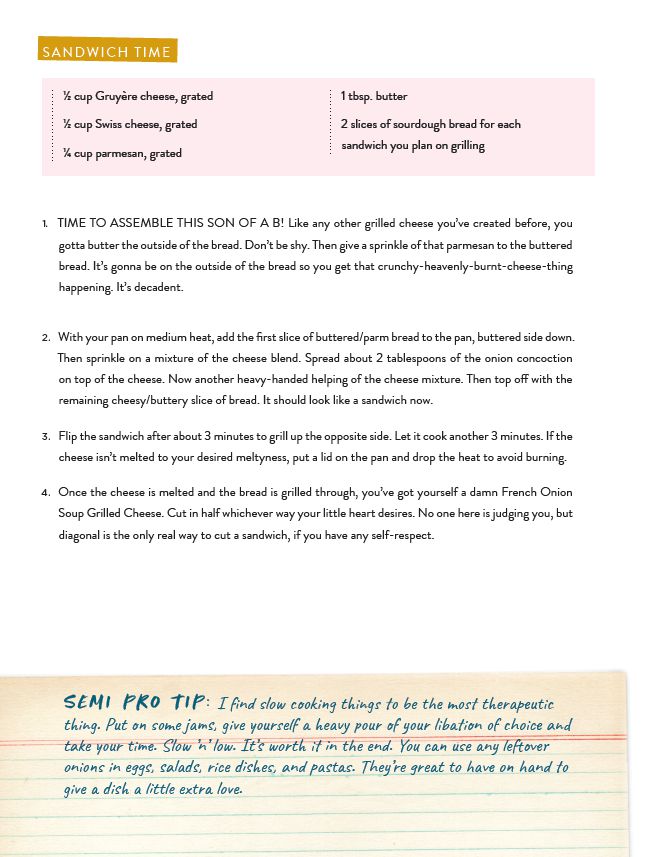