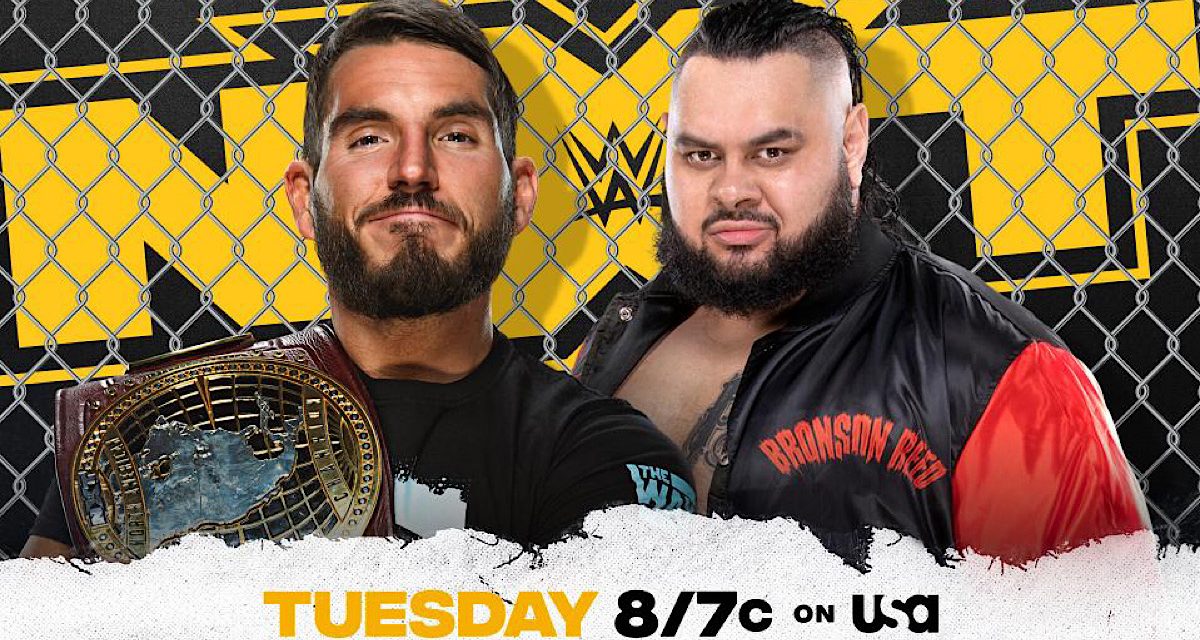 Tonight’s episode of NXT, promoted as a comic-book showdown, features a Steel Cage match for the North American Championship. The defending champion Johnny Gargano has showcased superhero-like powers of cowardice amidst his lengthy reign, but “The Colossal” Bronson Reed might be his kryptonite.

Stark shows fire and connects with an impressive springboard dropkick before Storm takes over with a hip-thrust into the steps. She continues working down the opposition until picture-in-picture as Stark makes the short-lived comeback. But the former again recuperates, and the competitors trade strikes when the broadcast returns. Notably, Stark’s intense offense is super crisp — her strikes especially. She survives the Storm Zero, kicking out at two, but Storm ultimately connects with an innovative spike maneuver for the victory. Before she can celebrate putting this mini-feud behind her though, Franky Monet appears onstage and stands there… menacingly.

Legado del Fantasma is interviewed backstage and is quickly interrupted by Timothy Thatcher and Tommaso Ciampa. “Toothless Timmy” showcases his best Spanish 1 vocabulary, which roughly translates into a matchup set for later tonight.

Cameron Grimes arrives in the parking lot and mistakes Jake Atlas for a valet. However Atlas, his opponent tonight, tells him that “The Million Dollar Man” Ted DiBiase took his spot.

The Way gets their deserved spa day after capturing the NXT Women’s Tag Team Championships a couple weeks back. Dexter Lumis, a man of multiple talents, is secretly Indi Hartwell’s masseuse. The champ doesn’t realize this (cucumber slices are covering her eyes) and inadvertently talks smack about him, which hurts Lumis’ feelings.

Grimes points at the titantron, displaying a montage of Ted DiBiase’s most embarrassing moments on WWF television. Grimes’ laugh turns into a scowl as fans (more specifically, the piped-in fans) chant for DiBiase anyhow, and Atlas connects with a dropkick. Following the break, Atlas delivers some high-flying offense until Grimes reverses with a closeline, and the competitors trade strikes thereafter. Grimes hits the standing Spanish Fly and looks for the Cave In, but DiBiase himself appears onstage, letting Atlas capitalize for the win. Grimes is irate and charges after DiBiase’s white limousine, but the cackle of “The Million Dollar Man” fades into the distance. “That damn Ted DiBiase!” says Grimes once again. Shoutout to Ted DiBiase, who for his age is looking like money.

A video package for Bronson Reed encapsulates his wrestling road to tonight. Surely, with momentum and investment in his corner, he’ll finally capture the gold.

Pete Dunne, “the baddest man in NXT,” sits down with Arash Markazi. He surveys his options in NXT and describes his wrestling style with cool, meaning he isn’t the brash “Bruiserweight” in this interview. Instead, he refreshingly comes across as real and genuine.

The former Sanity members battle after some inexplicit tensions between them recently. It won’t be clean, as Fabian Aichner and Marcel Barthel look to interfere ringside. But Dain’s running crossbody puts Wolfe away with ease, ending an unreasonably short bout. Imperium looks to regroup, but Aichner and Barthel attack their stablemate from behind. The unpredictable and indirect mini-storylines that Imperium have had might be a thought-out stylistic choice. But that’s highly doubtful.

The NXT Women’s Champion Raquel Gonzalez and Dakota Kai are interviewed backstage and are apparently looking for tag team gold. They’re interrupted by Ever-Rise, still promoting their online show, and Matt Martel gets a big slap from Gonzalez.

Ciampa and Thatcher dominate over Joaquin Wilde and Raul Mendoza; Thatcher amusingly towers over the latter. Mendoza starts bleeding around the mouth — thanks to the opposition’s signature stiffness, and together with Wilde, lands some strikes before commercial. An imaginative mind would say Ciampa hit closelines all throughout break, as Wilde and Mendoza concurrently take blows from an amped-up “Blackheart”. LDF regroups, Mendoza returns the favor with hard slaps, but falls to a comeback from Thatcher. Mendoza, bless him, fights through some brutal strikes to get to Wilde and saves him following a Widow’s Bell from Ciampa. Spoiling the fun is Grizzled Young Veterans to attack Ciampa, and LDF capitalizes with their finishing maneuver for three. LDF impresses more and more with each match, and for Mendoza, it’s possibly his best showing yet.

The returning Bobby Fish explains his interference last week, crediting Pete Dunne and Oney Lorcan as the ones responsible for injury. “That (unfinished) business between you and I? I am going to finish it,” Fish says to Dunne.

Oh boy. Back at the spa, Candice LeRae’s credit card has been declined, and in a strange turn of events, Indi Hartwell assumes that Dexter Lumis still loves her. It’s worse than a Hallmark movie.

On the outside, Jessi Kamea trips Sarray, and Aliyah subsequently takes over. But the Japanese newcomer fights back with a spinning heel kick, German, and top-rope dropkick; the Saito suplex awards her the pinfall victory.

“This is far from over” for former champions Shotzi Blackheart and Ember Moon. They’re real edgy, if it wasn’t obvious.

The same Diamond Mine vignette replays — still no further hints regarding the who or what.

Isaiah “Swerve” Scott’s new faction has a great look and equally great entrance music; will the in-ring follow suit? AJ Francis, now known as Top Dolla, destroys the opposition and laughs in confidence before tagging in the athletic Ashante “Thee” Adonis. He delivers an awesome dropick — “the most perfect you will ever see,” as commentary says — and pummels Daivari. It’s big Top Dolla who puts things away, and hats off to them both. Great debut! They deliver some bars — way more naturally than last week — and put the roster on notice.

General Manager William Regal announces that Legado del Fantasma are now the number one contenders for the NXT Tag Team Championships. Next week, Ember Moon and Shotzi Blackheart face Dakota Kai and Raquel Gonzalez to determine the contenders for their respective division.

Gargano immediately tries escaping through the door, but “The Colossal” is too big, too strong. He throws the champion into the steel walls, but Gargano smartly targets the knees. He hits a moonsault and begins the climb, but Reed recovers with a slam; however, Austin Theory’s distraction lends Gargano the upper hand heading into picture-in-picture. Reed eventually makes the comeback and delivers a Samoan drop from the second-rope, but the champion somehow survives, connecting with a wild sunset-flip powerbomb from the top rope and Poison Rana. Reed’s desperate crawls towards the door are stopped by Theory, but he powers through with a top-rope powerbomb to the champion. Ultimately, two Tsunami Splashes from the 330-pound Reed put this match to rest, and a new champion is crowned.

An emotional Reed holds the belt up high surrounded by celebratory pyro to close tonight’s episode of NXT!

I’ve definitely been spoiled the last two weeks, because a steel cage match without blood feels a little lifeless; nevertheless, Gargano-Reed pulled though. Personally, Hit Row’s debut was equally as exciting a segment with Top Dolla making a mark, and credit to Raul Mendoza for the dark horse performance of the night.