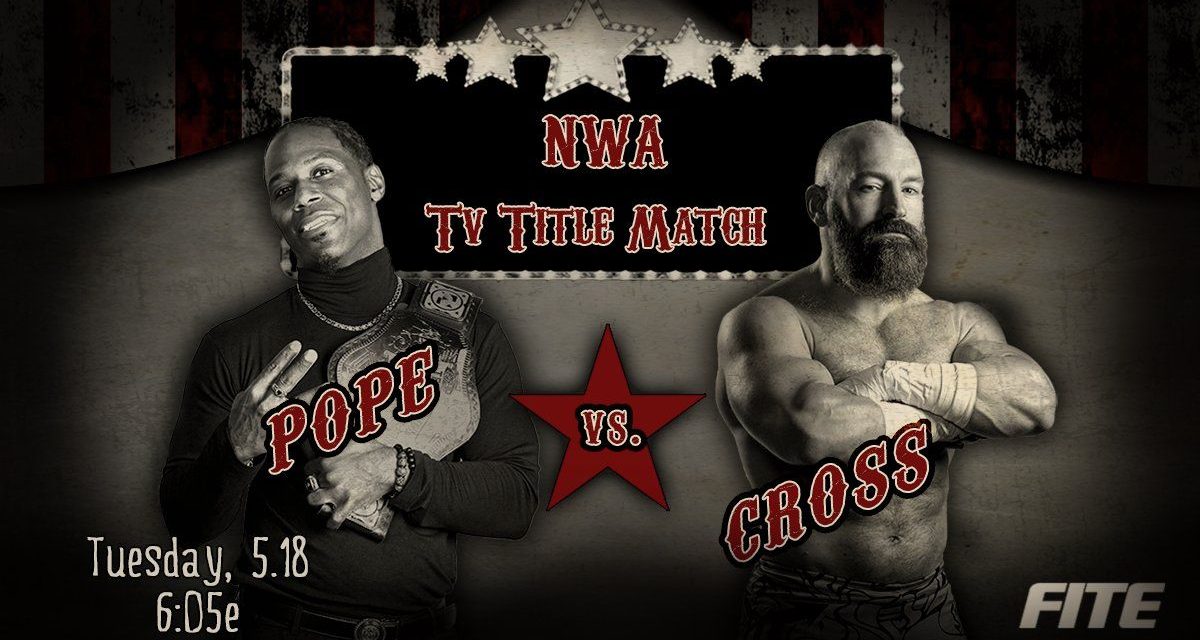 Tensions starting to flare with Nick Aldis and Strictly Business?  That means that we’ve stepped Into The Fire for another NWA POWERRR episode.  Live from the GPB Studios in Atlanta, GA, your commentators Joe Galli and Velvet Sky have the call. Tim Storm is away “on assignment”, and the shenanigans of the last few weeks have reached a boiling point in the NWA.

We turn to Kyle Davis at The Podium, and he has the owner, William Patrick Corgan…in the form of a letter that strongly denounces the recent actions of Strictly Business, and especially how they handled the end of the tag match by not having Chris Adonis and Thom Latimer not challenge for the titles.  In the letter that Davis read aloud, Adonis and Latimer are hereby stripped of the NWA tag title opportunities, Nick Aldis will forfeit one month’s salary to be donated to a charity (naturally), and Adonis and Aldis must be at next week’s show, or their contract and their titles forfeit.  Big announcements, and big opportunities lie ahead, so we start with the First Match of the night… 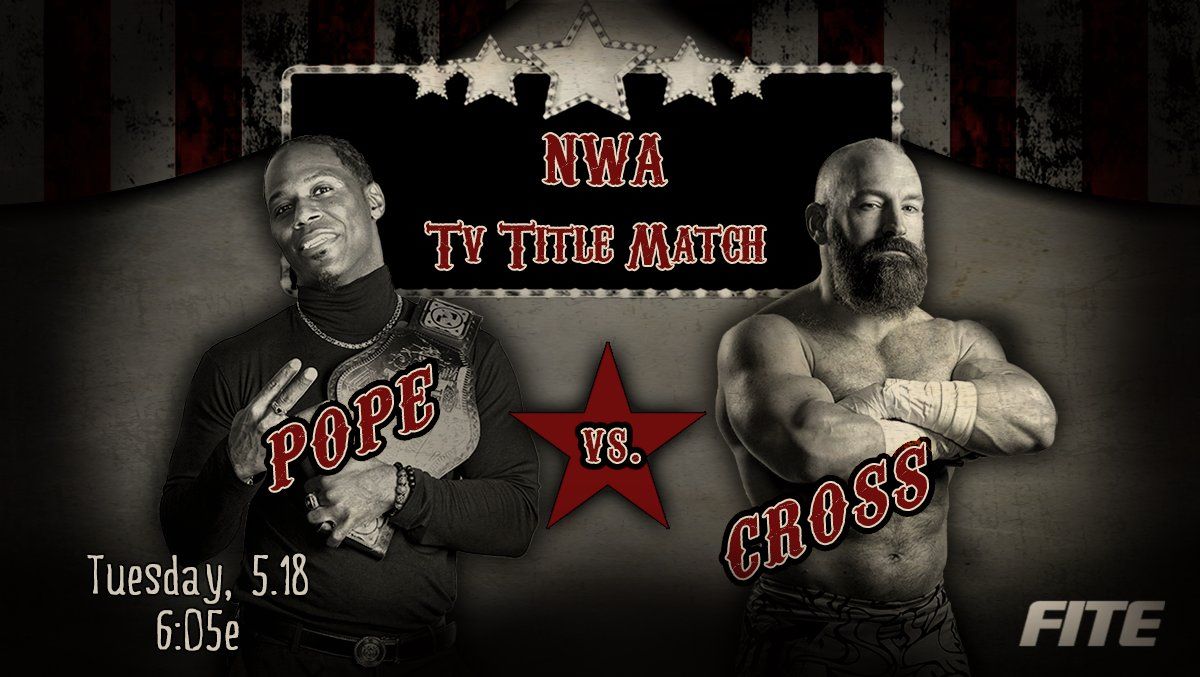 This will be the fourth defense for Da Pope, on his way to the “Lucky Seven” title defenses where he could potentially challenge for the Ten Pounds of Gold.  A lot can happen between now and the next match, but I love the direction Pope is heading these days.

Kyle Davis delivers with boxing-style intros (to the delight of the fans in the studios), and with 6:05 on the clock, the match starts with chain wrestling, but neither man gaining the edge.  At one point, it’s tit-for-tat with the arms drags, and both go for arm drags and miss, but give mutual respect.  First half of the match had no mistakes, until around the 3:45 mark Cross gets caught in a powerslam by Da Pope, followed by a suplex and cover for a count of two at 3:32 left in the match.  Pope picks up Cross at 3:10 for a delayed vertical suplex, but Cross reverses to a fireman’s carry into a nasty neckbreaker variant for a two count.  With 2:45 left, Pope catches Cross on the ropes, and delivers a kick to his sternum as he’s draped over the ropes.  Pope with a tackle, but Cross dodges and hits a bicycle kick that sends Pope out of the ring.  One suicide dive for “M-Dogg”, and Da Pope looks to be in trouble.  With 1:22 left, Cross goes up top for a shooting star press that misses, and Pope catches Cross with a forearm to the back and an uppercut in the corner.  Pope goes to Cross with the Elijah Express, and gets the pin and the win.

Your Winner via Pinfall:  Da Pope

That makes it Pope fourth successful Television title defense, as Cross raises his hand in a show of sportsmanship. 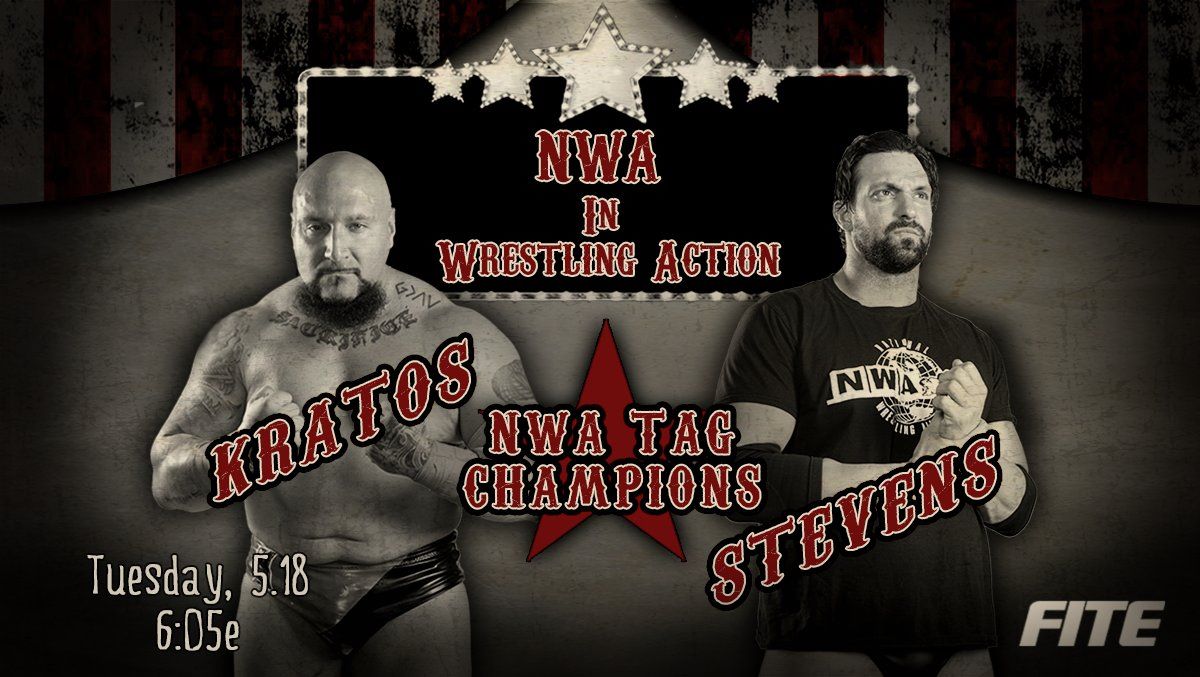 This is a non-title match, and Kratos/Stevens are not on the same page.  How will they fare tonight against this upstart team?  We see Rosser and Stevens start out, with “Mr. No Days Off” outwrestling Stevens.  Rockett and Rosser show cohesion, as Stevens gets worked over, and Kratos shows just apathy towards his tag partner.  At one point, in the tag champs corner, Stevens reaches out for a tag to get out of a jam Rosser has him in.  Kratos thinks about it…and tags in, and from there it’s all “God of War” as Kratos connects a clothesline to collapse Rosser.  Kratos with an abdominal stretch to Rosser, and he reaches to Stevens for leverage, and Stevens…just isn’t having it.  Again, the tag champs have no chemistry or cohesion, as Kratos glares at Stevens.  He releases the hold to backtalk to Stevens, and at that point Rosser tags Rockett, and takes it to Kratos…for a minute with a superkick to Kratos for a cover at a count of two.  Kratos then tags to Stevens, with goes with open hand strikes, a leg sweep, and a short DDT to Marshe for just a two count.  A dropkick by Marshe slows the attack by Stevens, and Kratos comes over and slams Rosser to the ring post. Stevens see this and is understandably upset by Kratos’ actions.  As Marshe tries to get back in the fight, Stevens with a discus clothesline to “All Day” to knock his lights out, and a cover for the three count, staring at Kratos.

Your Winners:  Aron Stevens and Kratos

After the match, Kratos keeps up the beatings, and all Stevens can do is stare in disbelief.

We go backstage with May Valentine, who is with Melina and Taryn Terrell. Melina is confident in Thunder Rosa, and doesn’t want Taryn to interfere in their upcoming number one contendership match. Taryn is all cutesy, and says nothing in “H-E-little toothpicks” will stop Kamille from taking what is hers, and she cannot believe that Melina even allowed Rosa to accept Kamille’s stipulations.  She even goes to say that if Melina interferes (in a high pitched voice that made *me* wince*), she will make sure to kick Melina’s “cute little behind.”

At this point, I’m convinced Taryn is a casting call away from being on Real Housewives of SLC, and no, that is not a compliment.  But let’s get back to the action, with….

This is essentially a tune up match in preparation for Kamille, who supposedly is watching somewhere in the building.  I am impressed by Jennacide’s size and power, but the real story of the match is that Thunder Rosa has the experience.  Rosa goes into some MMA-style moves with a leg takedown to an ankle lock pick, but Jennacide powers out, and gets Rosa on her shoulder and proceeds to ram her to the two top turnbuckles.  She punctuates it with a body slam to Rosa to cover for a count of two.  Jennacide goes for a powerbomb, but Rosa fights out with a huracanrana, and sends Jennacide to the corner.  Rosa lays in kicks to Jennacide’s inner thigh, and delivers not one, but two dropkicks to her quadriceps, and pulls her for a cover for two.  Both women back up, and Jennacide uses her strength to take down Rosa, and cinch the J-6000 (Crossface) submission, but Rosa escapes by putting her to a pin that makes Jennacide break the hold.  Rosa then goes to a nasty leg lock to a grapevine in the center of the ring. Rosa delivers kicks to Jennacide’s back, and with nowhere to go she has no choice but to quit.

Your Winner via Submission:  Thunder Rosa 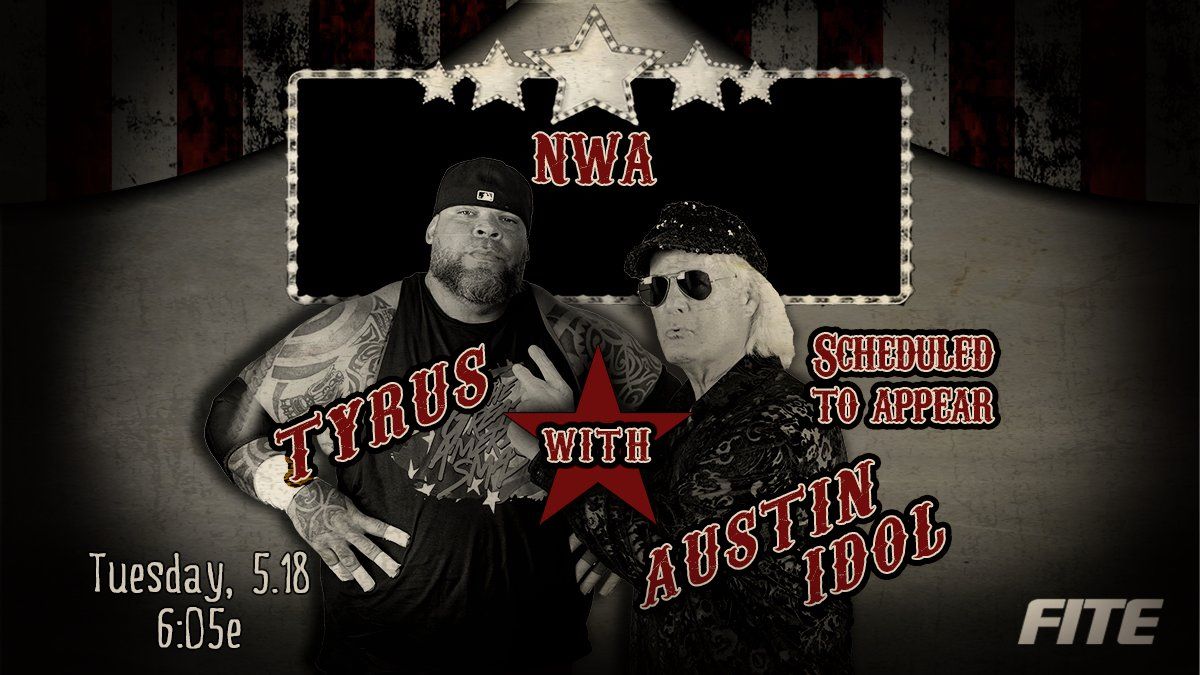 Courtesy of the NWA.

Back to The Podium with Kyle Davis, and Austin Idol with Tyrus. Tyrus, using Davis as a human armrest, congrats Da Pope, even though he didn’t lose. It was a draw, he claims, but it’s not about him tonight, and turns it over to Idol. Idol talks, claims he spoke to the top brass and in the number one spot in the 14-man battle royale will be Tyrus. He has a list of names, and as Davis is flummoxed that he has the list, (or maybe it’s because Tyrus is using him as a human mic stand), Idol states he is a genius, and that’s the level of work you get with IdolMania Sports.  If nothing else, Idol wants to ensure his client gets the gold sooner than later.

As for other with gold on their mind, we now go to your Main Event for the number one contendership for the NWA Tag Team Championship…

The End (Parrow and OdinSon) vs. War Kings (Crimson and “Godzilla” Jax Dane):

Folks, I’m gonna use the quote from Todd Keneley from the United Wrestling Network, and state this match will go into the land of the big uglies.  Forget finesse and technical prowess; this is a straight-up smash mouth match in the squared circle from the minute the bell rings, and the first few minutes are complete chaos. Crimson gets isolated, and Parrow and OdinSon work him over in their corner.  Crimson fights out to tag Dane, and now War Kings work over OdinSon in their corner.  Dane connects with a massive shoulder tackle to OdinSon in the corner, and a tag back to Crimson, who connect with a body slam and a knee to the back to ground OdinSon with a chin lock.  Crimson with forearms, and OdinSon shoves him back, to a knee from the outside courtesy of Parrow.  Crimson turns around to deal with Parrow, and OdinSon gets a nice drop kick on Crimson, who follows with a belly-to-belly slam to the mat and an impressive fireman’s carry with Parrow on his shoulders to slam him down on Crimson.  OdinSon covers, but broken up by Dane.

OdinSon continues the attack with a unique European uppercut to the back of Crimson for two.  Tag to Parrow, and he sends Crimson to the ropes, but Crimson gets a dropkick to Parrow.  He goes for the hot tag to Dane, and he is now your Godzilla En Fuego!  Match starts to break down, as Dane gets OdinSon with a Samoan drop for a two count.  Now both War Kings in the ring, isolating OdinSon, and Dane hits him with a splash in the corner, followed by a suplex and Crimson with the elbow drop.  Crimson covers as Parrow scrambles to break the count, but the ref hits his hand on the mat for the one, two…wait, was that three?  There’s some confusion, but the bell rings and Kyle Davis announces…

Your Winners via Pinfall:  War Kings

On replay, OdinSon raised his should just a half second late as the ref slapped his hand for the decisive three.  So we now have new challengers, and a big show coming up next week, which will be the last episode, as the show fades to black.

Remember when I said last week that the NWA was handling their tag division like a certain sports entertainment Universe?  Consider this my retraction, and they delivered tag action in spades, tell a great story (the continuing dissolution of Kratos and Stevens) with two great tag teams in War Kings and The End to close the show.  Plus, having Pope and Cross start the show whets the appetite for what both competitors can do when given enough time to really showcase, and Rosa always delivers.  Always.

As for next week’s show with the 14 man battle royale being their last show until the PPV coming up June 6th, it’s exciting to see how much the NWA is going to do to get people to sign up.

But, until then, see you in seven and subscribe to the show on Fite.TV.