AEW Dark and Elevation: Storylines and the Casino Battle Royal 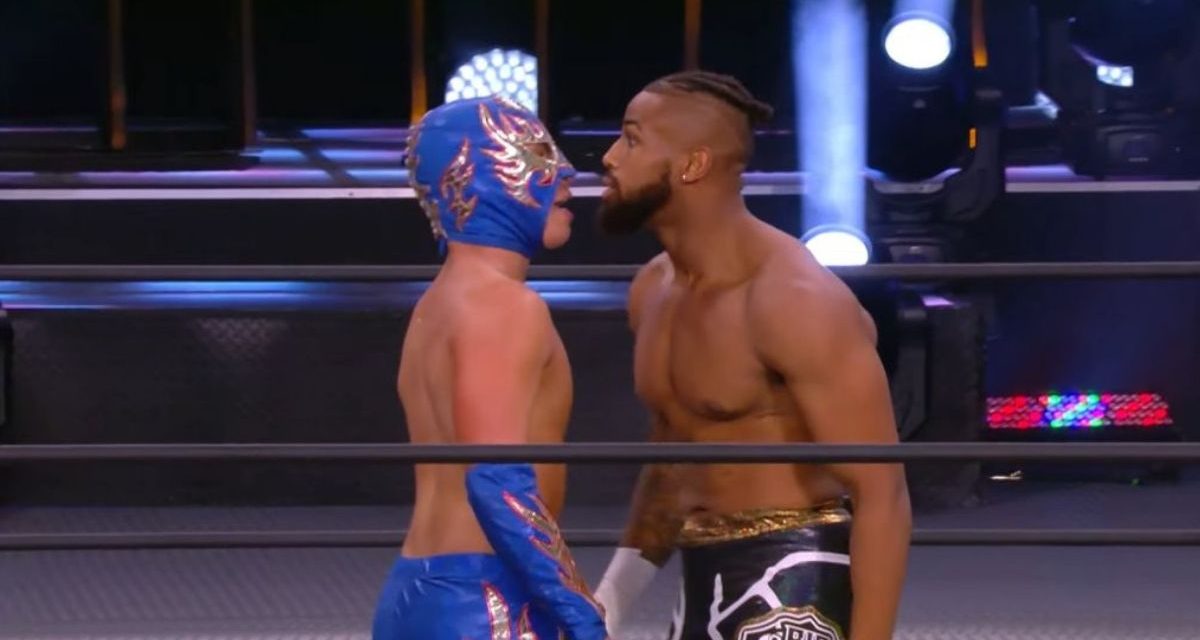 By JOE AGUINALDO – For SlamWrestling.net

This week’s AEW Dark Elevation and Dark were two solid shows with some good wrestling and more storyline vignettes compared to last week’s shows. Elevation had a spotlight interview featuring Ryan Nemeth talking about what he wants to accomplish in AEW. Promo segments on Dark were used primarily to announce some of the wrestlers who would be part of the Casino Battle Royale for the upcoming Double Or Nothing PPV.

If I had to choose a few highlights from each show and starting with Elevation, I’d recommend the Jon Moxley/Eddie Kingston tag match, not necessarily because of the actual wrestling but for the interaction between the two during the match. Additionally, the Dustin Rhodes vs Aaron Solow match helped progress what looks to be a future match between Rhodes and Nick Comoroto.
Paul Wight’s commentary on this show was spot on. He added some good insight and background on the competitors and the matches.

On Dark, I liked Nick Comoroto’s match. If booked properly with the right opponent, he has a bunch of potential. The Red Velvet and Big Swole tag match was entertaining and Lee Johnson looks better every time I see him [that is Lee Johnson on the right in the top photo, staring down Fuego Del Sol]. I also liked Kris Statlander vs Diamante. I’m a fan of both and this was just a good fight.

One last thought — as much as I enjoyed Dark Elevation, it clocked in at just under 2 hours and 27 minutes and I found myself losing steam while watching. I also felt there was a drop off in the in-ring work after the Ethan Page/Scorpio sky match, which didn’t help. Anyways, here are the results. Enjoy the shows.

1. Jungle Boy (w/Marko Stunt) submitted Adrian Alanis with the Snare Trap. The live crowd was totally into the Tarzan Boy song.
2. Dustin Rhodes beat Aaron Solow (w/ The Factory) after hitting the Cross Rhodes. This match pushed towards what appears to be a Dustin Rhodes vs Nick Comoro match with potentially the bull rope gimmick.
3. Jon Moxley & Eddie Kingston defeated Danny Limelight & Royce Isaacs when Mox and Kingston hit the Violent Crown on Limelight. The interaction between Mox and Kingston jawing back and forth during the match was hilarious.
4. Jake ‘The Snake’ and Lance Archer vignette pushing the storyline with Sting as well as Lance wanting a TNT title shot with Miro.
5. Lance Archer (w/Jake “The Snake” Roberts) pinned Bear Bronson after the Blackout in what was a pretty good hoss match featuring lots of high impact moves.
6. Paul Wight interviewed Ryan Nemeth talking about his goals in AEW.
7. Leyla Hirsch submitted Natalia Markova with a cross arm breaker. Markova is a current wrestler with SHINE who was making her AEW debut. Hirsch is good in-ring and is a character or a gimmick away from taking herself to the next level.
8. Scorpio Sky and Ethan Page beat Jaylen Brandyn and Traevon Jordan when Jordan tapped to a heel hook.
9. Bunny cut a promo about her upcoming match with Kilynn King.
10. The Bunny (w/H.F.O.) hit Kilynn King with knuckle dusters for the underhanded win.
11. The Acclaimed pinned Kevin Bennett and Kevin Blackwood with the Mic Drop. Caster and Bowens are improving each week and Caster’s rap game is always entertaining. BUT Booty Butt Cheeks from last week’s Elevation is still the best.
12. Ethan Page and Scorpio Sky cut a promo taking credit for Darby losing the TNT title. These two are developing into an obnoxious heel team (and I mean that in the best way possible).
13. QT Marshall (w/The Factory) hit a Diamond Cutter to beat Baron Black. Baron Black got some good offence in this match and QT made him look credible.
14. Joey Janela beat Daniel Garcia with a vicious looking Death Valley Driver
15. Private Party (w/H.F.O.) beat Dark Order’s Alex Reynolds & Alan “5” Angels when Quen pinned Reynolds after Matt Hardy interfered.
16. JD Drake and Ryan Nemeth defeated Derek Pisaturo and Roman Rozell when JD hit a moonsault on Pisaturo.
17. Footage from a photoshoot for Forbes magazine that was interrupted by Dr. Britt Baker.
18. Tay Conti def. Kiah Dream with the DDTay.
19. Matt Hardy cut a promo on the Dark Order. I’ll admit I’m not a fan of the MFO/Dark Order feud.
20. Penta El Zero Miedo hit the Fear Factor (package piledriver) to pin Robo who was making his AEW debut. Robo is a good physical specimen.
21. Thunder Rosa made Robyn Renegade tap to the Peruvian Necktie submission.
22. In the main event, Brian Cage (w/ Hook) hit the Weapon X (Gory special into a reverse STO) to beat Mike Sydal.

1. Powerhouse Hobbs beat Dean Alexander with a spinebuster. Hobbs has used the Town Business slam in previous matches so it was nice to see him use another finishing move.
2. Dante Martin beat Falco with a 450 splash.
3. Matt Hardy announces that he, Mark Quen and Isiah Kassiday will be in the Casino Battle Royale to counteract the three members of the Dark Order who will also be in that match.
4. 10 made Ryzin tap to the Full Nelson after Ryzin missed a senton bomb from the top.
5. Chuck Taylor beat Aaron Rourke with the Awful Waffle.
6. Lance Archer promo about Miro and wanting a TNT title shot. Lance’s promos are getting better or at least they’re making more sense than some of his earlier promos.
7. Lee Johnson beat Fuego Del Sol with the Blue Thunder in a fun match. Lee Johnson improves every time I see him wrestle.
8. The Acclaimed do a rap video promoting their match against Jon Moxley and Eddie Kingston on Dynamite this week. Another entertaining segment by the Acclaimed and specifically Max Caster.
9. Evil Uno and Colt Cabana beat Tamilian Vineesh and Duncan Mitchell when Cabana used the Billy Goat’s Curse submission move on Mitchell. Uno and Cabana had some good teamwork during this match and during the match they announced that Colt and Uno are in the Casino Battle Royale.
10. Cezar Bononi pinned Marko Stunt with a Death Valley Driver type move. The rest of Pretty Picture (Ryan Nemeth, Peter Avalon and JD Drake) attacked Marco after the match but Jungle Boy and Luchasaurus came out to make the save.
11. Jungle Boy promo. He will be part of the Casino Battle Royale.
12. Nick Comoroto (w/ the Factory) beat Adrian Alanis with a Last Ride powerbomb. Comoroto is a huge dude with potential. Given the right booking and more importantly the right opponents, this guy could be something sooner rather than later.
13. Serpentico (w/ Luther) beat Sonny Kiss (w/ Joey Janella) in what has to be a mild upset. Luther hit a pump kick on Kiss while the ref was distracted by Joey Janella.
14. Big Swole and Red Velvet (w/ Kiylnn King) defeated Vertvixen and Jazmine Allure when Swole hit Dirty Dancing on Vertvixen. During the match, they pushed the Red Velvet vs Serena Deeb match for Wednesday’s Dynamite.
15. Red Velvet cut a promo on Serena Deeb and their upcoming NWA women’s championship match.
16. Griff Garrison (w/ Julia Hart and Brian Pillman Jr) beat Deonn Rusman with a rolling elbow. Rusman was making his AEW debut and is a good looking kid who was given some offence.
17. Matt Sydal beat Marty Caucus with a lightning spiral. Caucus is a big guy who isn’t necessarily a body guy but he’s a thick potential hoss type wrestler.
18. Kris Statlander beat Diamante with a Big Bang Theory in what was an entertaining fight.
19. Nyla Rose (w/ Vicki Guerrero) beat Reka Tehaka with the Beast Bomb.
20. Angelico beat Vary Morales by submission with the Navaro death roll.
21. In the main event, Brian Pillman Jr (w/ Julia Hart) beat Luther with the springboard clothesline. This match was OK at times but was also very awkward at times. It missed the mark for me. After the match, Serpentico attacked Pillman but Julia Hart ran to the back to get Griff Garrison and make the save.

Thanks for reading and c-ya next week.