Having just celebrated 35 years in the wrestling business, and having worn just about every hat you can wear in the business (including a famous one with blinking lights – more on that later), there’s no shortage of stories that Jeff Jarrett can share. And with the recent launch of his podcast, My World with Jeff Jarrett, that’s exactly what he’s doing, including the one that drops today: a tribute to his friend, the late great Owen Hart.

“I wasn’t expecting to do (an episode about Owen) this soon,” he told SlamWrestling.net, just hours before the show is about to air. “It’s just our third show. But with the anniversary of his passing coming up, Conrad (Conrad Thompson, Jarrett’s co-host and renowned wrestling podcaster) wanted to do it.”

The discussion about Owen took Jarrett on an emotional journey, one that he admits he wasn’t entirely prepared for.

“I knew it was going to be emotional, but I didn’t have any idea that it would be as emotional as it was,” he said. “Going through the journey with him, and obviously talking about (the night Owen tragically died in) Kansas City, those are things that I carry in my life up to even this day. It was a very emotional (discussion), and I hope that the people that hear it, and that are fans of Owen will think it’s a great tribute. That was certainly my goal.”

That goal is inspired because of the significant bond Jarrett had with Hart; a bond that transcended simply their careers.

“When we met, I realized that we had a lot more in common than just being performers in the ring. We were both family men, we were both sons of wrestling promoters, we both had siblings, we both had a real desire and passion for the industry. Our friendship bonded pretty quickly but not over wrestling but really over life.” 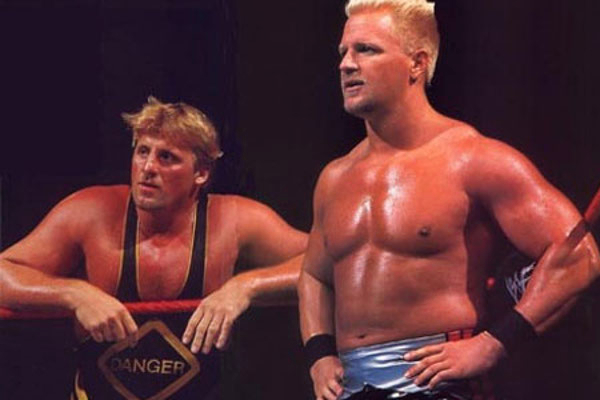 Jarrett notes, though, that the discussion is not entirely maudlin, as you can’t talk about Owen Hart without some discussion on his notorious “ribs,” the practical jokes he played on, well, pretty much everyone. But as much as he and Thompson shared laughs during the episode, simply telling funny stories would not do Hart justice.

“I’ve made it my personal mission, literally since the day he passed,” Jarrett pledged, “that I was going to honor him. For (Hart’s children) Oje and Athena’s sake, and for (his widow) Martha, I want people to know that Owen was so much more than a wrestler, or a prankster. He was a man’s man with a tender heart, he was incredibly respected, and he had so much integrity. I don’t say this glibly: Owen was one-of-a-kind. Super unique, and super special in our industry. I haven’t met anyone else like him in all my years in this business.”

Although Jarrett has discussed Owen’s passing in the past, he notes that he has not shared a lot of his feelings publicly in the past. And, actually, that could be said for pretty much everything he talks about during his podcasts. For someone who has eschewed doing “shoot” interviews in the past, the podcast is really the first time Jarrett has been so unfiltered. He credits a lot of that to Thompson, who was the one who urged him to start the podcast in the first place.

“I brought Bruce Prichard to work with us in TNA/Impact when I returned there in 2017, and Bruce was doing his Something to Wrestle podcast with Conrad. Conrad actually reached out to me at that time, but I wasn’t really interested. I was more focused on what was coming up – the next TV show, the next pay-per-view – than on looking back.”

It wasn’t until the pandemic that Jarrett reconsidered, prompted by watching the Last Dance documentary series about legendary basketball star Michael Jordan.

“I watched Jordan with the laptop in his hand, and they would play back some of his game footage or an interview or a practice, he would respond to it. I found that to be some of the most compelling content that I’ve ever viewed, and it really made me start thinking in a different light about podcasting as a form of entertainment.”

“I’d been telling stories during my whole career, but I never really looked at that as ‘entertainment.’ But then when Conrad started laying out the business component of it, and I saw all the (good shows) he was doing with Bruce, and Tony Schiavone, and the faction he’d developed, I saw how (well it could be done). So I give Conrad his due – he stayed persistent. And then with the pandemic, and The Last Dance, after that, we just rolled with it.”

The early results have been positive both in terms of the fan reception (“We were number four in all of sports for most of last week, and the number one wrestling podcast”) and with Jarrett himself, as he says he’s really enjoying it so far.

Which is good, because Jarrett says he has a lot more stories to share. In the first two episodes, they touched on two major events in Jarrett’s career: the Good Housekeeping match against Chyna and the events that surrounded that; and the last episode of WCW Nitro, which saw Jarrett publicly fired by Vince McMahon, who had purchased the company earlier that day.

“When you look back in my career, whether it was in Memphis in USWA, or Dallas in WCCW, Japan, Puerto Rico, of course the WWE, WCW, TNA, all the way up to being inducted in both (the WWE and Impact) Halls of Fame, there’s a lot of stories there. We’re coming up on the 19th anniversary of TNA, so an episode on the launching and formation of that is on the horizon as well,” he previewed.

There’s certainly a lot of content to mine in talking about TNA (now Impact Wrestling), in particularly the first few years of the company, calling the period between 2002 and 2009 “some of the greatest times of my life.”

A keen follower of today’s product, Jarrett notes with some pride that many of the stars that got their first major exposure in that company are now some of the biggest stars in the world today.

“I hear comments like, ‘You gave a chance to guys like AJ Styles, Eric Young, Bobby Roode, the Motor City Machine Guns, Samoa Joe,’ and I could go on and on, and I think to myself how lucky I was that we had them in the organization. When you think about everyone who was there week in and week out, it really was an incredible roster.”

And he’s also glad that many of them are getting the opportunity to be seen by even more eyes than ever before, thanks to the evolution of the business, and the various ways to consume the product.

“I did an interview back in 1993 or 1994, and I was asked back then where I thought the business is going,” he recalled. “I said back then, that it won’t be long before too long that we will be able to see seven nights of live wrestling seven nights a week. And now, that’s a reality.”

“You have Peacock, one of the four major broadcasters in America, that speaks volumes about where the industry sits. You have Impact, AEW, Ring of Honor, and FITE-TV where you can watch independent wrestling, which is the lifeblood of the industry. From a financial perspective, and I believe from a fan base perspective, I believe the industry has never been as healthy.”

Another example of the industry’s ubiquity is the fact that WWE has two shows airing on the A&E Network, the Biography series focusing on WWE legends, and the Most Wanted Treasures show in which the company tries to recover historical items from the company’s history.

While Jarrett isn’t currently slated for a Biography episode, he was prominently featured in the Booker T one, as he was the person Booker defeated to win his first WCW World Championship.

“Booker and I go way back, we were buddies and had crossed paths and worked together for many years,” Jarrett said. “Booker’s a fantastic guy and an incredible talent. That night – for me, what I take pride in my career is making other guys look as good as they possibly can – and when I look back on that night, I was very happy to do it. I’m so glad that it happened for him, and I’m so happy for all his success.”

Jarrett will also be appearing in the upcoming episode on Mick Foley, with whom he also has a lengthy relationship (their mutual respect is best-summarized in their social media exchange when Jarrett was announced as a WWE Hall of Fame inductee in 2018).

“Mick and I have had quite the journey together,” Jarrett reflected. “He came to Tennessee in 1988, and then we also worked together in Dallas. And obviously he came to TNA. I was really glad to be a part of his Biography.”

As for the Most Wanted Treasures show, Jarrett isn’t so sure that one would be as compelling – mainly because it would be an incredibly short search to find any of his collectibles.

“I’m very much a packrat,” he said. “I have almost everything from my career. I’m sure there’s some different stuff around the globe – Mexico and Japan. But mostly everything else is intact.”

And as for the Double-J blinking hat that Jarrett wore during his “Double J” run? 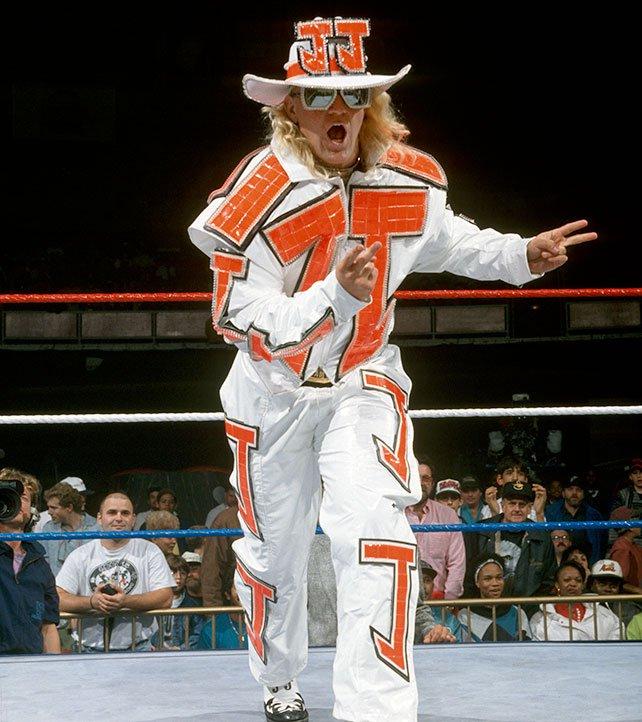 “WWE held on to that,” he laughed.

Even though he won’t be seen there, Jarrett does have a few other irons in the fire, both in wrestling and in the broader entertainment world. The most immediate one is taking the My World podcast on the road with Thompson.

“With the world opening up, Conrad told me I’d better get ready to do some live events. Our first show is scheduled for Baltimore on June 12th. After that, I’m looking forward to going all over. We’ve had offers from all across the States, and the United Kingdom. I’m hoping we can come up to Canada too – I’ve always had a really good connection with that audience, so I’m looking forward to getting there once things open up.”

“There are so many opportunities to entertain people, opportunities that are just waiting to be picked up,” he summed up, “I just want to grab them.”