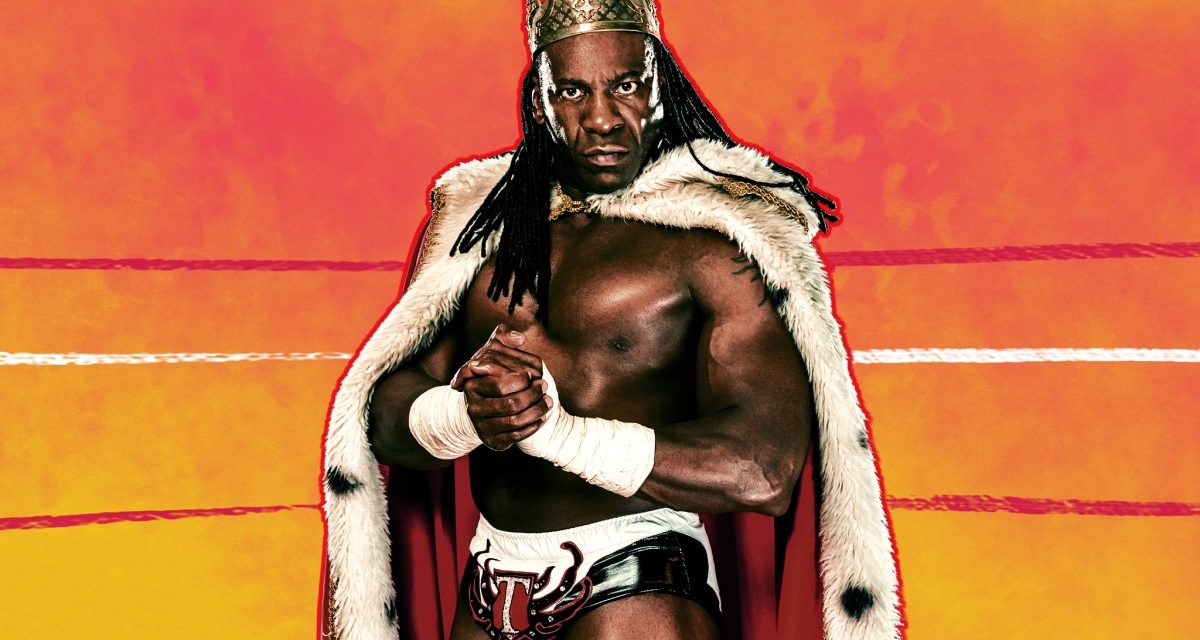 As the previous entries in the new series of Biography on A&E featuring big-name WWE stars has thus far proven, the show is not where you go for hard-hitting, no-holds barred documentary storytelling. It seems to be, after all, a WWE produced show, as was noted in WWE’s February 23rd press release announcing the series, being put out “under the award-winning ‘Biography’ banner”, which makes A&E sound more like a distributor than creative producer.

That’s cool, of course — just know what you’re getting into.

This week’s episode, though, does have a bit more intrigue than most. The spotlight is on Booker T, and what gives this one the potential for standing out is that, out of everybody on the show’s list, Booker T is the least “WWE guy” out of all of them. Booker T, even after all of his numerous accomplishments in the WWF/E, achieved his notoriety in the WCW in a way that neither Steve Austin nor Mick Foley, both subjects in the series, ever did.

On top of that, WWE documentary storytelling has also been comparatively quiet in regards to Booker T . There’s no shortage of DVD and digital productions on the other wrestlers appearing on Biography: Austin, Foley, Bret Hart, Shawn Michaels, Roddy Piper, or Randy Savage. After all of the film devoted to those wrestlers, Booker T is finally receiving some well-deserved time in the sun.

We start with Booker T walking the streets of New York. There are heavy shades of Shaft, which makes sense as Booker says he grew up wanting to be Shaft. He watched it a hundred times by his estimation – paraphrasing “Can you dig it, sucka” from the movie’s theme song by Isaac Hayes.

Booker walks us around South Park, Texas, briefing us on his upbringing, having lost his father at ten months old, moving around a lot, all with his mom working through the night. There were four girls and four boys in the family, but by the time they moved to Houston some had grown and moved on. Booker’s sister, Bonita, recalls those times with Lash (Stevie Ray) at age 16, Booker at 13, and herself at 13.  She says they were the youngest and the closest.

There are hints of Harlem Heat’s future as Lash and Booker were setting up rings in the backyard out of old mattresses, but everything changed with their mother’s fall through the attic ceiling while trying to repair a ventilation fan. She suffered with a chronic injury, and complications led to her early death at age 49. Carolyn, another sister sums it up eloquently and painfully, saying they were like “little ants without the queen”. Lash recalls that it actually fractured the family somewhat as everybody sought to deal with things in their own way.

In an unnecessary intrusion, JBL pops in to describe how hard things were for Booker’s family at that point. Thanks, but no thanks to his outsider’s opinion here, and thankfully we get back to the family telling their own story.

Like Booker spilling some details on life without his mom: he’s not in favour of going to school, and he was surrounded by partying, drugs, and watching the gambling and prostitutes that were all around the areas where he shouldn’t have been at his age. Still, something clicked in his brain, because while he says he was stuck without any ambition, he knew he didn’t want to be where he was.

Still, Booker was hard-pressed to find a way to get out of the rut, and tells his tale of “the incident” which became a repeat incident. He was working at a Wendy’s and thought it would be easy to steal from the restaurant. He and his friends did — up to twenty-six times before getting caught. He heads off to prison and to work on what was essentially a chain gang , which was something he had seen on TV and thought was either made up or part of the past.

He speaks of his son Brandon, now an adult and in jail, and how he couldn’t really be a father at that early point in his life. Brandon arrived in an unplanned birth when Booker was 17 years old, and Brandon’s mother was not in a position to take care of him either. Getting out of jail didn’t mean that Booker was ready to land on his feet through legitimate means, and he stole money from the drug dealer that was supplying for his sister, who was herself selling weed.

In this tricky time in Booker’s life, Lash helped give his younger brother some direction by getting him some work as a security guard. That led to a connection with a man named Bruce Gasarch, appearing in the documentary, to relate how he not only helped Booker get some work, but when Lash spoke of going to Ivan Putski’s school of wrestling, Gasarch gave Booker the financial aid to go with his brother. 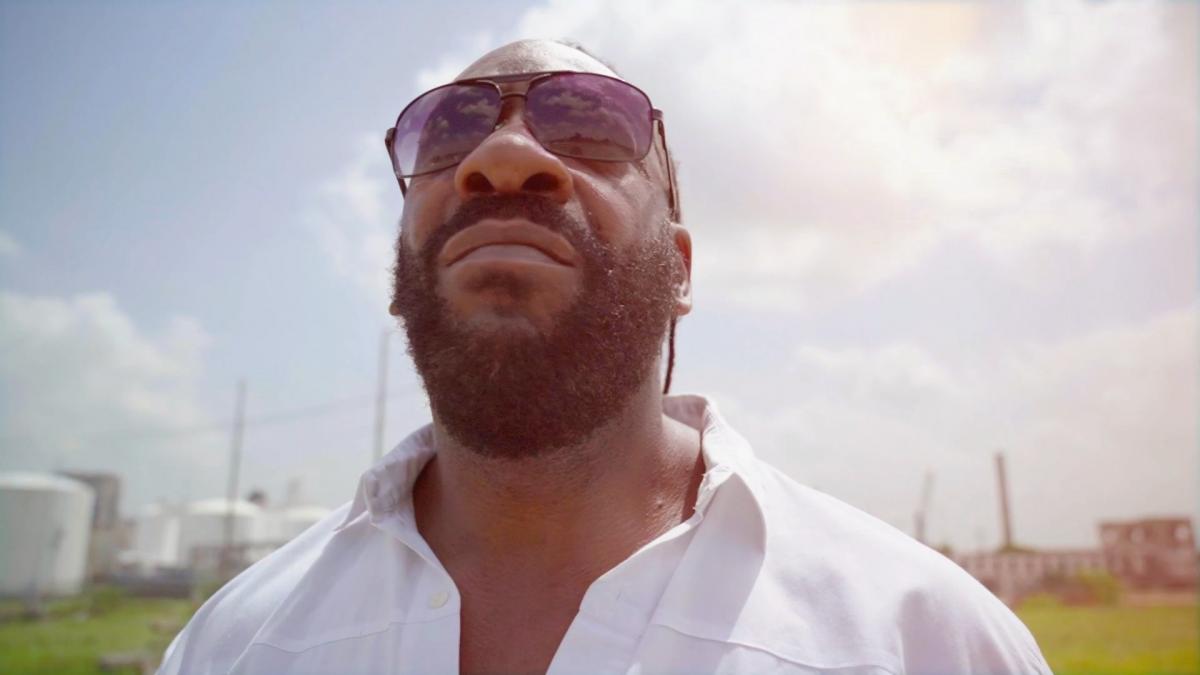 Booker T in a still from Biography. Photo: WWE

We move through Booker’s early wrestling days with some footage Putski’s school, with Booker as G.I. Bro in May of 1990; then into the Western Wrestling Alliance, before heading off to the Global Wrestling Federation (GWF) where Eddie Gilbert put Booker and Lash together as a tag team — even though Gilbert had originally only wanted to meet with Lash. The Ebony Experience of Booker T and Stevie Ray was born.

After a fun little diversion into dance history, from popping and locking on Soul Train to the night in the GWF that Booker “realized how much power the Spinaroonie had”, the brothers land in WCW and are off and running. I know that it’s not a Harlem Heat documentary, per se, but there’s nothing on Sherri Martel or Jacqueline (or Colonel Parker, for that matter). Again, I recognize that the focus is on Booker T, but it feels like a cheat to not have any acknowledgement of their managers’ presence at all.

Booker’s infamous drop of the n-word during an unscripted promo is brought up, but is quickly moved past. Booker says it’s the only time his peers have ever heard him say that word, and it sounds like it will be an entry point to some openness about race relations. Booker dips his toes into that water a little but later in the show, but ultimately it’s a door slightly poked open and then left alone.

We meet Sharmell, now Booker’s long-time wife, when she was starting off a Nitro Girl and the two of them started talking on the set of Ready to Rumble. This means that the show is going right past Booker’s first marriage to Levestia, even though she actually appeared on WCW programming a couple of times.

It’s a bit of an odd juxtaposition to see how Booker is very open to parts of his life that he isn’t proud of because he considers them critical parts of the building of his (real-life) character, but some topics like the few just mentioned above are briefly mentioned or not included at all.

The decision of how to spend screen-time is even stranger as we are treated to what amounts to an infomercial for how great the WWF’s Attitude Era was. Obviously, it’s a part of the story as it leads to Vince McMahon purchasing WCW and bringing Booker T into the mix, but seeing it packaged as how it was the unbridled brilliance of the WWF’s programming is unnecessarily self-promotional.

Booker’s arrival in the WWE showcases him accidentally injuring Steve Austin with a drop on the announcer’s table (which Austin acknowledges wasn’t Booker’s fault, but that it led to backstage heat), his comedic antics in promos and backstage segments, and his entertaining run as King Booker. There’s not even a peep about Booker’s close call with the World Heavyweight Championship in a match with Triple H at WrestleMania XIX. This match is not looked generally back upon fondly by wrestling fans as Booker was defeated in an unflattering fashion, so maybe the WWE would just rather not remind people about it, but to not include it when looking back on Booker’s time with the WWE leaves another noticeable hole.

The episode finishes up by showing Booker in his life as a father, his commentating and backstage presence with the WWE, and the Reality of Wrestling school (then promotion), which he opened up with Stevie Ray.

To go back to the introduction of this review: the selective storytelling that existed in the previous three episodes of Biography is still here this week, no doubt, but what this episode has going for it is that it gives two hours to Booker T that should have been granted to him long ago, so that alone makes it worth checking out.