Drew McIntyre on becoming an author and embracing his authentic self 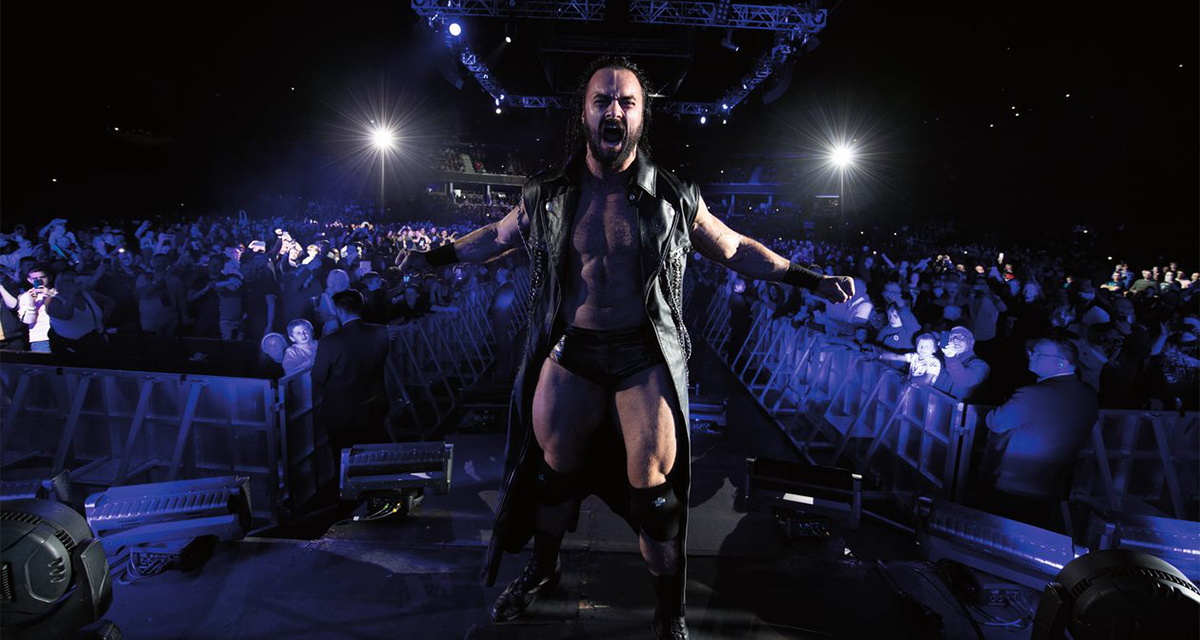 World Wrestling Entertainment (WWE) Superstar and now first-time author, Drew McIntyre, talked with Jason Agnew of the Sunday Night’s Main Event (SNME) podcast. McIntyre just released his autobiography, A Chosen Destiny: My Story on May 4, 2021. The book, written with Sarah Edworthy, is out now from Gallery Books, an imprint of Simon & Schuster. The interview with McIntyre airs on tonight’s broadcast, available here. SlamWrestling.net was granted early access to the show. 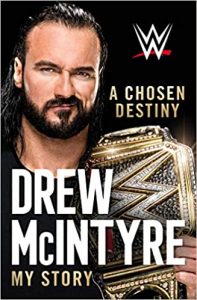 Agnew began the show by asking McIntyre what many readers/pro wrestling fans are undoubtedly wondering: why would the 35-year-old, Scottish born wrestler decide to put out a book now when he still has several years in the squared circle ahead of him?

McIntyre admitted with a laugh, that he initially felt releasing his autobiography was premature, but he changed his mind when he thought his story could truly inspire people to pursue their dreams.

“And I went away, thought about it and you know, the situation we’ve been in over the past year (COVID-19),” observed McInytre. “And I spoke to my wife and sat down I was like, ‘You know what if I’m able to help people, inspire people through my story, and wrestling, and especially outside the ring, to not give up no matter how dark times seem? That there’s a light at the end of the tunnel no matter what. Then that’s what it’s all about. If I can help one person, let’s do it.’ And that’s what it all came from. It was that conversation and the hope that through my story, we can inspire people out there. And that’s why it’s written not just for wrestling fans, which was very important to me that it was written for everybody. For new fans that could understand how the industry works, but at the same time, it’s more focused on the lessons I learned along the way. I’ve been knocked down too many times.”

Agnew pointed out that McIntyre put his WWE character name on the book as opposed to his birth name Andrew (Drew) Galloway, so he questioned how much of the book is the real person versus the character. McIntyre assured Agnew that readers would be getting an authentic look at Drew Galloway. 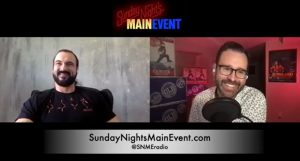 “And the funny thing is these days, it’s certainly not the case when I was younger, or even probably a few years ago, when I first returned to WWE, like Drew McIntyre was a character,” reflected McIntyre. “And these days, Drew McIntyre is just Drew Galloway with the volume turned up. That’s what finally resonated with the fans. When I finally started making a fan connection in 2020.”

Part of what makes McIntyre’s story so fascinating is the fact that that his current run in WWE is his second time around with the promotion. Even though he was infamously referred to as “the chosen one,” McIntyre was released by WWE in 2014 only to return in 2017. After his tumultuous journey, McIntyre would defeat Brock Lesnar for the WWE championship at WrestleMania 36. But his WrestleMania moment would come with a catch: due to the outbreak of COVID-19, there were no fans watching his victory in person. A fact that Agnew pointed out had to be “a slight disappointment” for McIntyre. 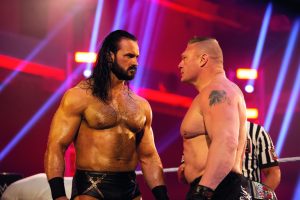 Caption from the book: Brock Lesnar has a menacing stare, but I’m no slouch myself. WrestleMania 36 – April 5, 2020. All book photos, including the top feature photo, are courtesy of Simon & Schuster.

“It wasn’t, but leading up to it was,” confessed McIntyre. “I’d be lying if I said, you know, after 20 years of work, and finally I win the Royal Rumble guaranteed title match, I challenge the beast, Brock Lesnar. Such an anomaly in our industry, and it’s gonna be the biggest match of my career, the main event of WrestleMania. It’s my American hometown, Tampa, Florida, where I’ve lived for 13 years. My family’s come from Scotland, my wife’s going to be there. 80,000 people behind me with the biggest reactions at WWE. This is unbelievable. Woah man! Pandemic. COVID. Everything shuts down. So, I’d be lying if I said I wasn’t angry and disappointed.”

He continued, “Of course, this happens to me. You’ve seen it in the book, A Chosen Destiny, how many times this happens. Of course, bad luck Drew this is going to happen to me when I finally went to a major WrestleMania. But by the time mania came around, I had been watching the news. I understood the gravity of the situation. How many lives have been lost. How people were struggling mentally being locked down across the world. And I kind of came to my senses felt like a bit of an ass to be honest, for feeling that way. I was like, ‘Wow we’re pushing ahead. We’re the only entertainment company in the world bringing original content. We’re giving them a whole weekend. Two days of WrestleMania. Saturday and Sunday. And I’m the last match on Sunday, the feel-good story, the chance to make a lot of people happy during these difficult times.’ And that changed my perspective, totally.”

With WrestleMania 37, the live fans were back, but Agnew remarked that with McIntyre losing in his match to Bobby Lashley, he was once again denied the big fan reaction at the promotion’s biggest show of the year. But McIntyre preferred to look at the moment with a positive perspective. 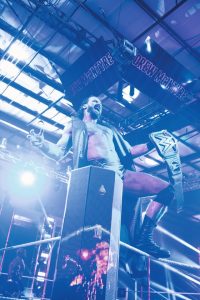 Caption from the book: My signature pose looks so much better with that beautiful title in my hand. Backlash – June 14, 2020.

“In the end everyone expected me to have that moment,” McIntyre stated. “And I could hear the reaction when he (Lashley) put me out with the full nelson of, ‘Oh my god! Drew didn’t win!’ And I think that’s important for me as a character. And I think that’s part of my story as a detail in the book that I have to keep overcoming all the time. I’m not Superman. (John) Cena was a superman, he’d always overcome all the time, all the time. But people struggle to relate to Superman. He’s from a different planet. He’s made of steel. He shoots lasers from his eyes. I’m more of the Batman. I’m very flawed in many ways and I have to keep overcoming especially as a larger-than-life good guy. It’s very hard to get sympathy in general, especially when you’ve been on top for a long time. So, it gives me a big mountain to try and overcome once again and chase that mania moment.”

Agnew’s full interview with McIntyre is available here, or sign up as a patreon for even more from SNME.