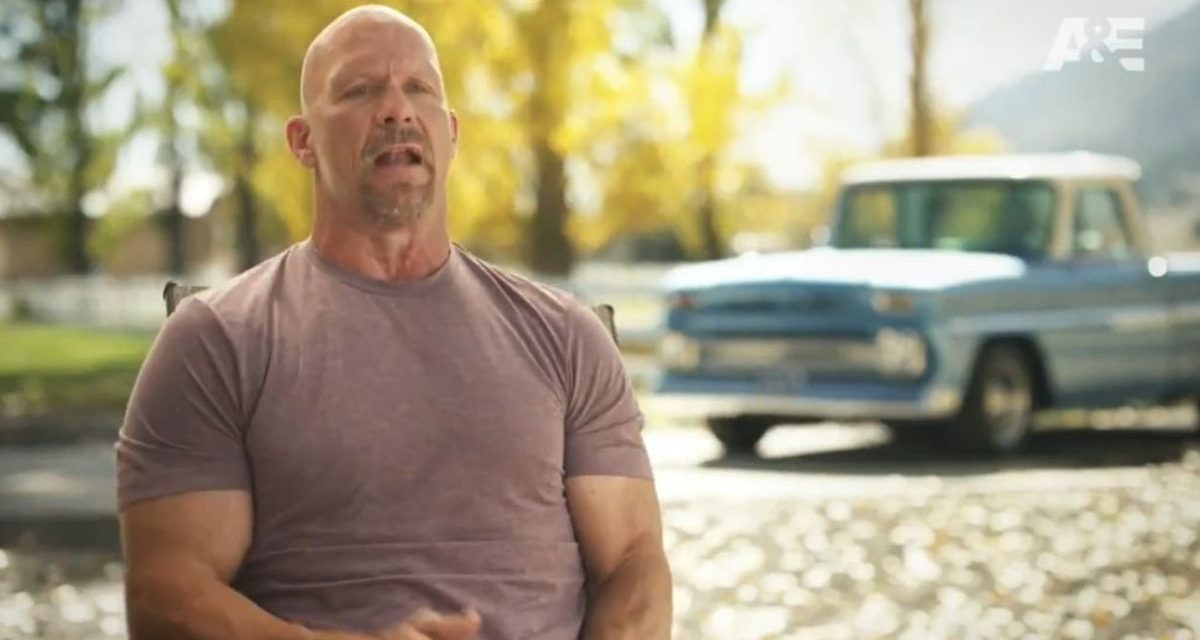 The question before watching the A&E Biography on “Stone Cold” Steve Austin that debuted on April 18, 2021, was obvious — What could we possibly learn about one of the most famous professional wrestlers of all time, that hasn’t already been spoken of in countless interviews or WWE-released video tapes and DVDs?

It turns out, not much.

There was nothing revolutionary, nothing that a long-time fan wouldn’t know. But then it wasn’t totally meant for “us” but for mainstream television viewers, those who haven’t cut the cable.

It was good to hear from Austin’s sister and two brothers, and his high school football coach, but it all sped by so quickly there was no time for them to tell us much beyond a soundbite.

The Biography started off with a ride along, where Austin admitted that he doesn’t yearn to go back to wrestling in any way, shape or form. We revisit him again and again on his ranch, reflecting back on his health, his family issues, the burdens of travel, his battles with alcohol.

Given that A&E is such a mainstream station, it was interesting to see that Stone Cold’s middle finger salutes were blurred out, but some of the language — hell, ass, sh** — was left in.

It also meant that A&E was able to have access to vintage WWE, WCW, USWA footage and photos, at no doubt a reasonable fee (if any), something that WWE has done a good job of keeping away from other documentarians.

Kudos to A&E for at least reaching outside the WWE for Mike Johnson of PWInsider.com, as the historian to help explain some of the wrestling things to more mainstream viewers. Dan Patrick of ESPN and  Dan Katz of Barstool Sports were there to talk about Austin’s entrance into more popular culture.

It’s inevitable to hear the same stories again: the starving and paying his dues, the firing over the phone by WCW, the promos in ECW, the silly Ringmaster gimmick in WWE, how he came up with the Stone Cold nickname, the King of the Ring (including a side run in the Kliq, because, sigh), Owen Hart breaking Austin’s neck (which might have been the longest part of the entire show), the battle with the boss Mr. McMahon, the rise of The Rock. Oddly left out was the WrestleMania 13 bout with Bret Hart that proved that Austin could perform at the highest level.

But man, did you see the people they interviewed? Anyone unique? Nope. Anyone WWE might not have given its approval to? Nope. How about his original trainer, Chico Cabello, who is still around? Maybe an ex-wife, like Jeanie Clarke or Debra McMichael? Then we might hear about the domestic violence allegations. His biographer Dennis Brent? Shall I go on?

The only freshness wrestling wise was hearing from the generation that was influenced by Austin, like Adam Cole and Kevin Owens.

It wasn’t until the last quarter of the two-hour doc when he really opens up about his daughters. “I never won father of the year,” Austin said in easily the most revealing aspect of the whole doc. “We don’t know each other as well as we should.”

His decision to walk away from WWE and not lose to Brock Lesnar without any build up is interesting, as it resulted in some “bad decisions” in his personal life — but again, it flies by and we don’t spend any time learning more about it. The reconciliation, through Jim Ross, is neat to hear about, as is Austin’s decision to retire unannounced.

His movie career (such as it was) got a couple of minutes, but the podcast does get some love (since it is WWE-affiliated). His monstrous merchandise, which changed the business, is only briefly touched upon. What about his Broken Skull IPA? Not mentioned.

The pessimist in me (as I “Don’t Trust Anyone”) wonders whether WWE actually funded this documentary rather than A&E. It could have been on a DVD release.

So, setting aside my own knowledge, as best I can, let’s say that your average non-fan might have been pulled into this, but I think there is a much better chance that they were turned off by the sheer masculinity of it all (his sister and Lilian Garcia were the only women interviewed).