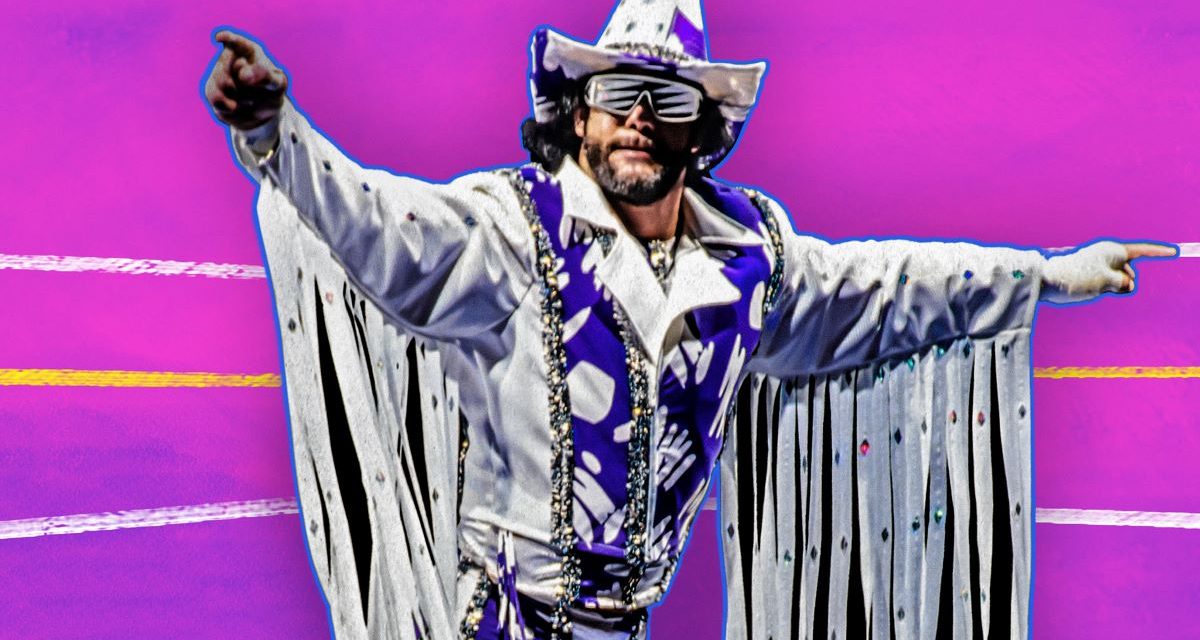 A&E is still delivering their Biography series (alongside WWE’s participation), with the focus this week on “Macho Man” Randy Savage.  So much has been covered over the years, most recently with VICE TV’s “Dark Side of the Ring” take on Savage and his relationship with Miss Elizabeth from season one, I wondered what is left to cover of the “Macho Madness?”

If you are coming into this expecting lengthy discussions, there is not much to sink your teeth into.  Like   “Stone Cold” Steve Austin and “Rowdy” Roddy Piper the last two weeks, A&E gives a perfunctory take and then moves on, with little discussion of what they covered.

But, in the two hours, they do cover some interesting ground, starting with his father, Angelo Poffo, and his early years growing up.  Seeing the candid photos of a young (and beardless) Randy Poffo is quite the sight to see.  While much is known of his time in baseball, hearing about how he had his shoulder separated during a collision in a game, and learning to throw the baseball left handed was an eye opener, as was the fact that he did have a career (albeit brief) in the majors, starting with the Chicago White Sox, before he was cut, and then joined his dad in his International Championship Wrestling (ICW) outlaw territory.  This was very revealing, as the Poffo’s ICW was encroaching on the Memphis wrestling territory, and hearing Jerry “The King” Lawler’s side of the territory days on the Memphis Championship Wrestling side is fascinating, with the tensions between the sides, the escalations, and (after the Poffo’s ICW ran out of money) the blow off with Lawler and Savage under the Memphis banner.  It’s a subject that is fascinating that I hope gets expanded further one day.

The other side that was great to see was how Randy Poffo morphed over the years into the “Macho Man”, from hearing the YMCA song to developing the voice that is borrowed from a similarly, bushy-haired, bearded strongman Pampero Firpo, and his growl of “Oh, Yeah!” became synonymous with Randy Savage, as told by Lanny Poffo.  Equally awesome was hearing from Michael Braun, the costume designer whose sense of fashion and flamboyance dressed not only Jimi Hendrix and Sly and the Family Stone, but developed the style (the cowboy hat, the fringe, the tassels, the Day-Glo neon with different fonts of “Macho Man”) that was eye-popping’ and pimpin’ beyond it’s time (the show even make mention of the fact that Braun did dress up some actual pimps in the Tampa, FL. area).  And of course, who can forget the entrance music of Pomp and Circumstance that is a standard to the Macho Man, and not lame graduation music? 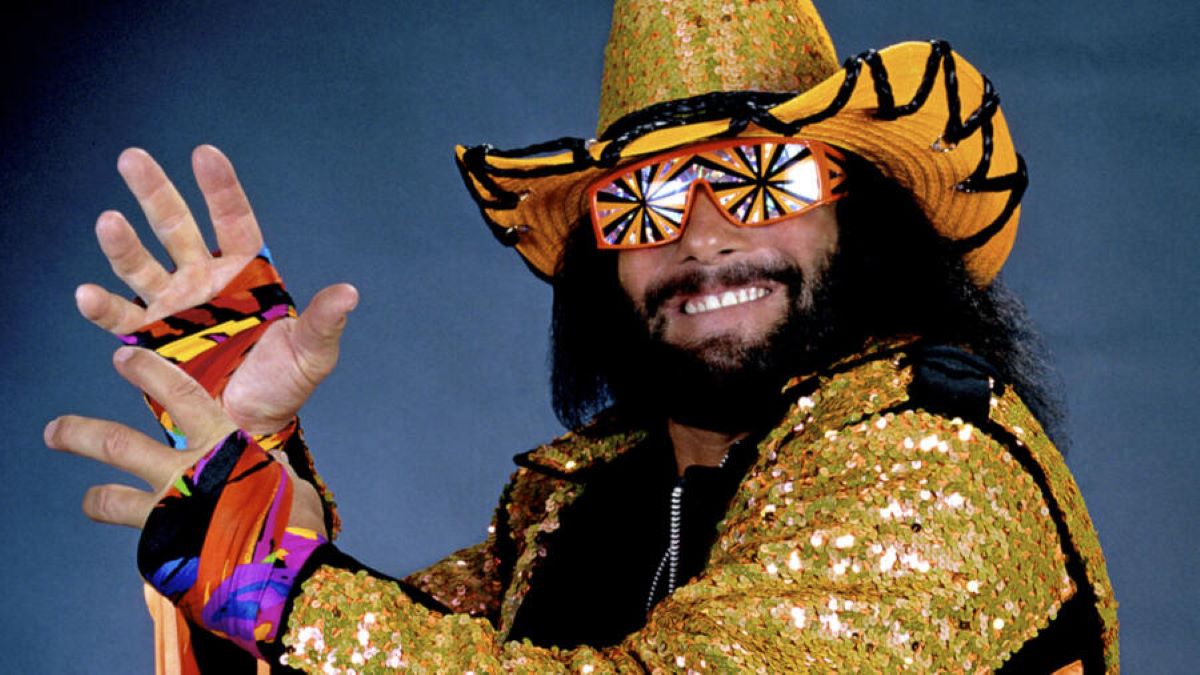 But, as with anything involving the “Macho Man”, you can’t bring up Randy Savage without making mention of Miss Elizabeth, and how she added another dimension that Macho Man personified.  Now, as for the jealousy and domination of Miss Elizabeth, that was covered in season one of “Dark Side of the Ring” in much more detail, and there really isn’t a whole lot to add now at this point.

Nor is there much to say about his time in the WWF, his highly intense drive, his near-OCD focus in and out of the ring, and the biggest match of his life  for WrestleMania III in the Pontiac Silverdome with Ricky “The Dragon” Steamboat for the WWF Intercontinental title that damn near overshadowed the main event with Hulk Hogan and Andre the Giant.  What is amusing is Hulk’s take that they didn’t try to overshadow the main event, with Steamboat offering the counterpoint that, yeah, they did plan to overshadow the main event (As for me:  I’m gonna take Steamboat’s side on this).  Equally amusing is the famed legal pads of steps/moves Steamboat and Savage wrote and went over meticulously, and as they showed the match, Steamboat counted the move numbers on commentary (“1” for Lockup, and so on).

Of course, for how cutting edge and prepared and innovative he was as a “smaller” wrestler compared to other WWF stars of that era, much is made of the contentious relationship with Savage and Hogan, and “living in Hogan’s shadow.”  Also the thing that gets glossed over is how he was moved in the WWF to doing commentary when he had no injuries, concussions, or signs of slowing down, and moving to WCW (without Vince’s permission), and taking all that Slim Jim contract money with him (to the tune of $750,000 US a year).

It also goes into his later years, and his reinvention with a more jacked up physique, with “Gorgeous George” as the new valet.  George’s take on the relationship  was just as eye opening, with their partying ways, the drugs, the steroid use, and the voyeuristic possessiveness of Savage that, had this been done 15 or more years later, would be another statistic in the #MeToo and #SpeakingOut movement.

While the stories were fascinating, the added commentary from others that were not there during that time in the 80’s wrestling boom were unnecessary.  Hearing from Lawler, Steamboat, Hogan, Jimmy “Mouth of the South” Hart, Jake “The Snake” Roberts, added some great elements to the biography.  As for the rest, from Brian Myers (billed under his WWE persona “Curt Hawkins”), Natayla, Dan Soder (actor from “Inside Amy Schumer”, and “Billions”), Peter Rosenberg (ESPN Radio/ Cheap Heat Host) and (ugh) Tom “Bubba the Love Sponge” Clem are a distraction that add a total sum of zero.  They only thing Clem does add is how he and Hogan would try to rile up Savage in the early 2000s on his radio show, and how it would send Savage into a fit of rage, calling his and other stations to chew out Hogan and Clem.  If anything, Clem’s contribution proves one thing: Never have The Love Sponge involved in anything wrestling.  Especially if he’s recording something, right Hulkster?

If nothing else, like Piper before, A&E Biography give a story that captures as much as it can of the life and times of the “Macho Man” Randy Savage.  while there isn’t a lot to sink into, you sure…Snap into it!  Oh, Yeahhhh!

EDITOR’S NOTE: It was incorrectly reported that the Slim Jim contract was $750 million, instead of $750,000; we regret the error.