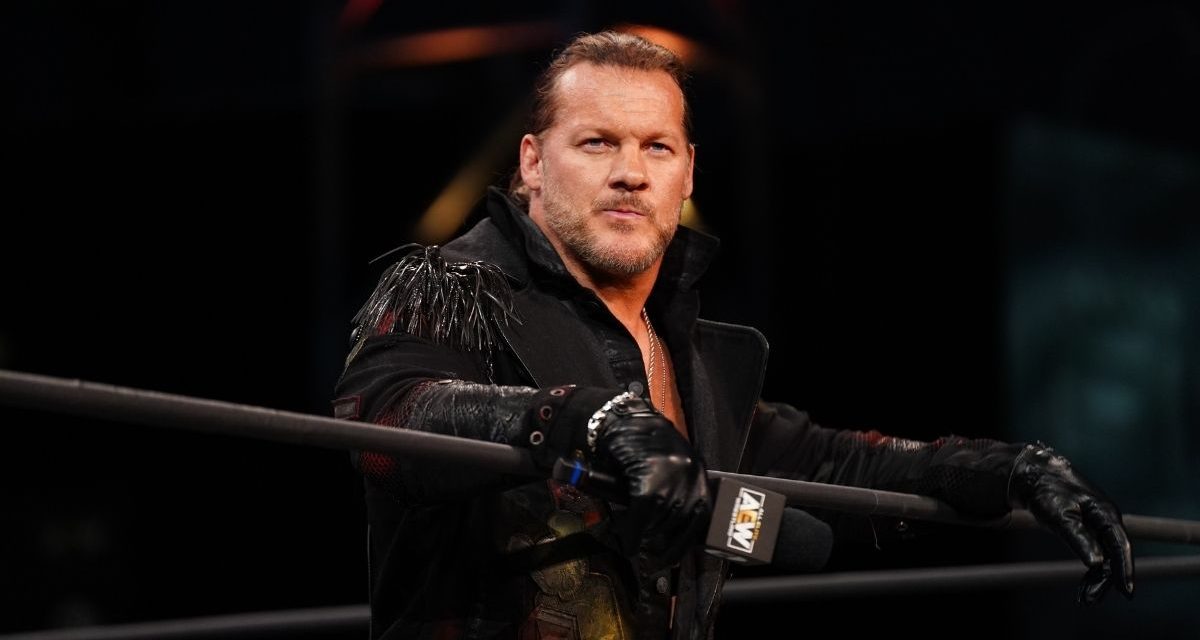 But SlamWrestling.net was allowed to listen in and there are plenty of gems for fans.

Lovranski and Jericho go way back, and share a passion for music — but Lovranski once found himself on Jericho bad side, on “The List” when Jericho came to Toronto with WWE. All in good fun, of course. That rapport was most evident when the pair dove into recent bands that they enjoy (“Mouth” mentioned Thee Oh Sees; Jericho is into The Struts, Hailstorm and Greta Van Fleet). They also talked about how the Fozzy song “Judas” has become a big seller thanks to Jericho using it as his entrance music, and the fans singing along to it. 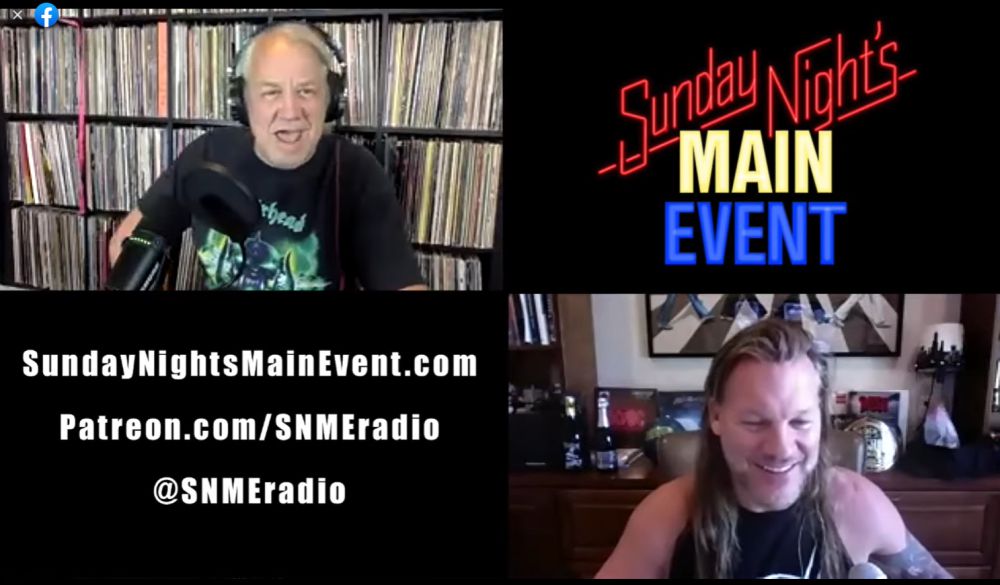 But the main gist of the conversation was about AEW.

A long-time fan, Lovranski enjoys seeing AEW bring back old storylines or angles in a new way in AEW. It works for Jericho, who noted that they didn’t want AEW to ever be seen as “WWE lite.”

“Wrestling, you know, it’s not rocket science in the stories that you’re telling. And you can always go back to the past to pull ideas out, just like great movies will do that, or great rock and roll bands will do that. You can see similarities in things that happened in the past,” said Jericho. “We do utilize those ideas, because I always feel that there’s a turnover of wrestling fans every 15, 20 years or so. So you can do angles that haven’t been seen since the ’80s or ’90s, or even the early Attitude Era, because a lot of people have never seen them before. As long as you put your own twist on it, the people that have seen it will go, ‘Oh, that’s that’s pretty cool, kind of homage to,’ and the people that haven’t seen it will go, ‘This is the greatest thing I’ve ever seen.’ And that’s really the secret to putting on a weekly television show, is always providing something new and unique, and something original, even if you put a little bit of a twist in something that you’ve seen or done before.”

Asked about whether he is contributing ideas to AEW’s lead booker, Tony Khan, Jericho said there is some give and take.

“When you’re talking about the creative side of things, I mean, obviously I worry about what Chris Jericho’s storyline is first and foremost. And then I don’t know if I have a lot of say as far as like, obviously Tony’s the boss, and that’s one thing that’s really grown over the last year is that people understand. And I knew it from the start. But I think a lot of the guys thought like, ‘Oh, we’re a big committee and a big team.’ No, there needs to be one boss, and that’s Tony Kahn. And then you file down from there,” said Jericho. “So I have some say when I’m asked my opinions, but I also don’t know everything that’s going on, on the show, nor do I want to, because worrying about 30 or 40 different storylines, is quite a lot of pressure. Tony loves that. He’s a stats guy. He’s a numbers guy, he can remember all that stuff, and I think he really enjoys that.

“So if he’s looking at a certain section of all of this, and asks my advice or opinion or tells me things that he’s doing, I’ll give my feedback. I would say, like you said, an advisor is a great way to kind of explain what I do for AEW, and not just for Tony Khan, but for a lot of the guys.”

Jericho did look at both Orange Cassidy and MJF as two young names that he was interested in competing against, and he did his best to familiarize himself with the rest of the AEW wrestlers — most of whom were new to him. “I started looking through the roster, because obviously you always want to think, ‘Who can I work with?'”

Before working with Cassidy, Jericho found himself trying to figure out the gimmick. “I realized he’s doing something that’s never been done before, and created this whole new character, in this whole new kind of universe around him, that people went nuts because of it. And I thought that is really smart. This is not a stupid gimmick. This is actually a genius gimmick,” said Jericho.

Of course, MJF’s The Pinnacle — MJF, Wardlow, Shawn Spears, Cash Wheeler, and Dax Harwood — with Tully Blanchard as their manager, is taking on Jericho’s Inner Circle — Jake Hager, Sammy Guevara, Santana and Ortiz — at Blood and Guts on a special AEW Dynamite on Wednesday, May 5.

Jericho said that he could see the chemistry between the two of them almost immediately, in the fall of 2019, when they first verbally sparred. But it didn’t get kicked into high gear until March 2020, and it’s been building the whole time. “When was the last time you had an angle for eight, nine months?” challenged Jericho. “And we’re just getting started! That’s the sign of great storytelling, and that’s the sign of a great competitor and talent you can work with. We were great heels together. And now we’re great foes of heel and babyface together. Eventually, he’ll turn babyface and we’ll be great babyfaces together. And then we’ll turn again. He’s a guy that you can see can go either way. He loves being a heel. But he’s so damn entertaining that pretty soon — I know, he’s Jericho in 2008, ’09 and ’10. Pretty soon no matter what you do, people are gonna be cheering for you. And that’s just a sign of a guy who can really talk, he knows exactly what his character is.” 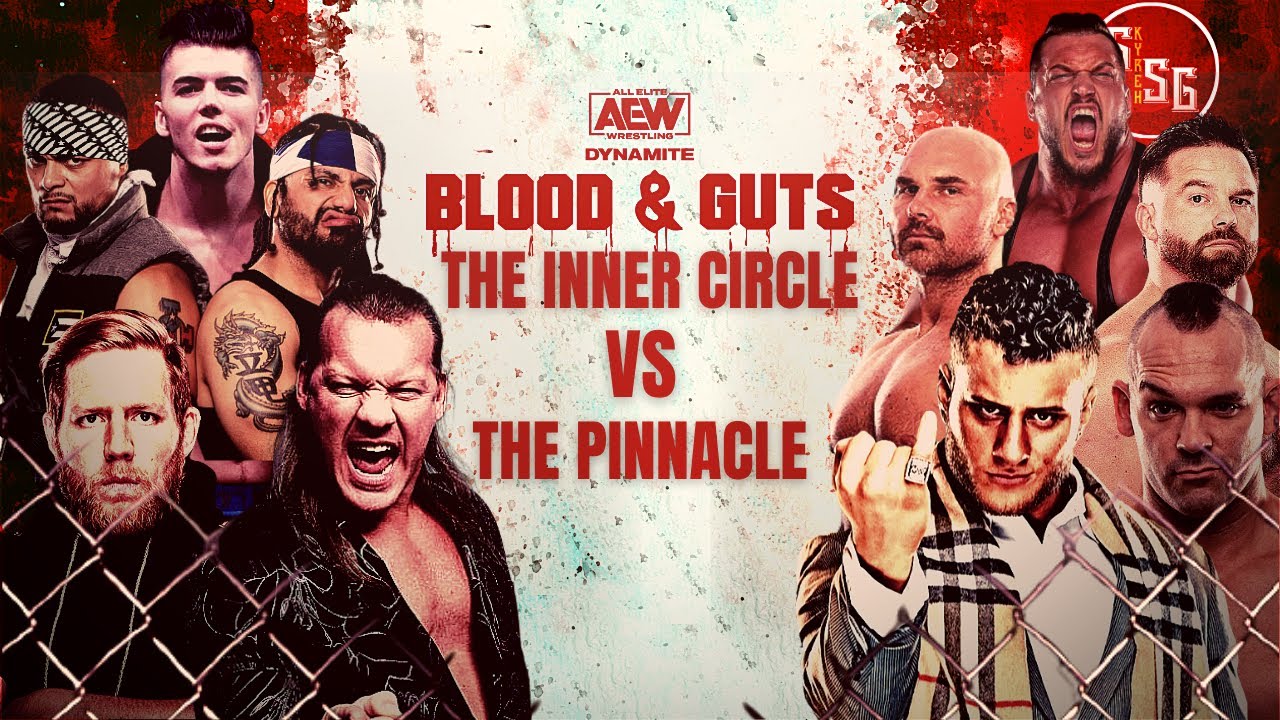 Blood and Guts was originally scheduled to take place on March 25, 2020 at the Prudential Center in Newark, New Jersey, but it was moved and then postponed altogether because of the global pandemic.

“We did announce Blood and Guts for March 25 of last year, we had 15,000 tickets sold at the Prudential Center. We were like, ‘If we can just get to there…’ We didn’t make it. We missed it by two weeks,” recalled Jericho. “But that angle between The Elite and the Inner Circle had built so well, that Blood and Guts was a great way to blow it off. Once we couldn’t do the match, it was still kind of in the pipeline, but we didn’t want to do it in front of no crowd. And then we came up with Stadium Stampede, and things went in a different direction.

“So we always had Blood and Guts in our back pocket. But you don’t want to just throw it out there and do it because it’s a match. I find sometimes matches get used just to do it, and we didn’t want that — especially considering it’s the first one. Yes, it’s War Games influenced, but it’s still our version of it. It’s called Blood and Guts, it’s different. Once The Pinnacle and the Inner Circle angle started heating up, we realized that this is the perfect place to bring it back.”

Jericho has heard the criticism that it’s too early in the feud for this kind of violent match. “I disagree because the story really kicked off, and we’ve done a great job over the last three, four weeks of building the intensity of this of this story and this feud. It needs almost to start off in Blood and Guts because the angle warrants it — and that’s always the best place to put a gimmick match, so to speak, is when the angle and the story warrants it, not just because you have a pay-per-view next month called Blood and Guts and you’ve got to shoehorn that match in there.”

The entire interview, including a discussion on all the factions in AEW, Dynamite’s demographics, Brodie Lee, and more, is available here, or sign up as a Patreon for even more from SNME.