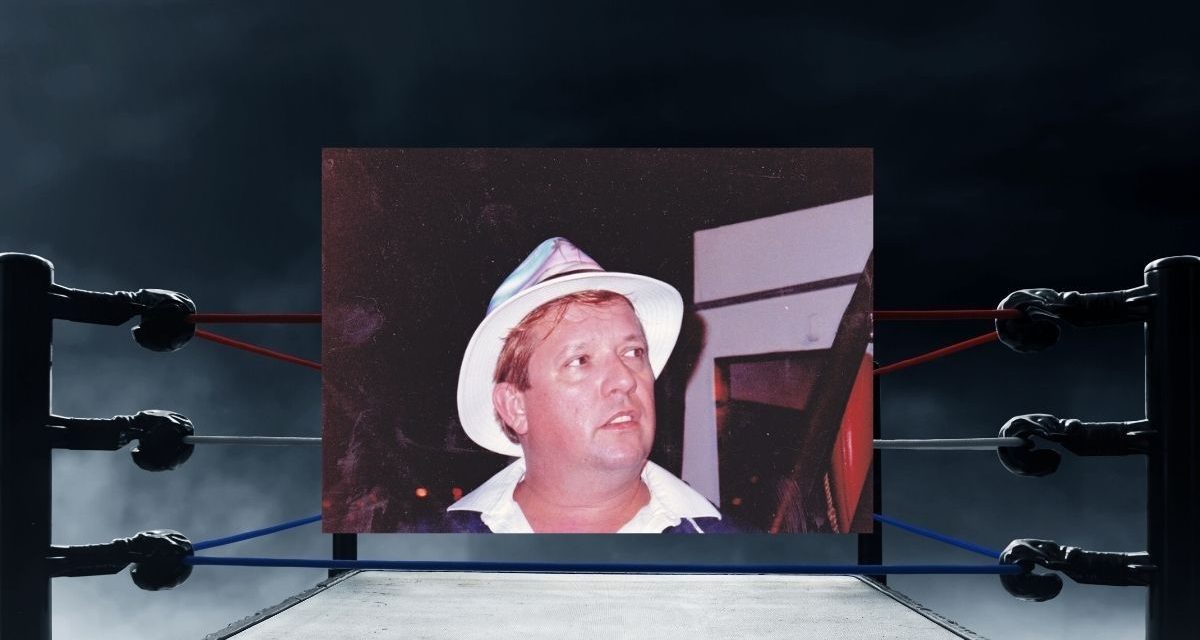 Rob Russen, who has died at age 75, had notable careers as a musician and songwriter, as a boxing promoter, and as a wrestling promoter. He was also a part of a groundbreaking case involving an Elvis impersonator that went to court against the Presley estate.

As Russen’s old friend Sal Corrente said today, “Everything he got into, he seemed to make some noise with.”

Though, Corrente noted, “Rob was not one that really talked about what he did very much,” and he was “not a braggart at all.”

Robert L. Russen was born on November 27, 1946, in Butler, Pennsylvania, to Robert F. and Barbara Russen. He attended Woodrow Wilson High School in Camden, NJ, and then Rider University. He served his country in the United States Air Force from 1968-69, rising to sergeant before his honorable discharge.

“I have had a literal lifetime of experience in professional entertainment and sports. In the entertainment industry I have been a musician, a singer/songwriter/producer, agent, manager and promoter. I have had acts with hit records and major show room and concert appearances,” Russen wrote on his LinkedIn profile.

In a rare 2011 interview, Russen talked with independent music magazine It’s Psychedelic Baby about his early days in music. Inspired by the early days of rock’n’roll, he began learning guitar at 13, and was in a band a year later. The Soul Providers, The Ellingtons, The Banished, The Turfers were early bands, and his father and a friend set up a small record label, Castle Records, to promote his son’s work. That gave Russen exposure to producing early in his life too.

The band Negative Space released the album Hard, Heavy, Mean & Evil in 1970. Though just 500 albums were produced, it was regularly bootlegged for years, and in 2000, Monster Records reissued it with bonus material under title The Living Dead Years. It was considered one of the first examples of heavy metal music. “I would like to think that I was a very angry young man when I was in Negative Space and the music shows the fire that was burning inside,” he told It’s Psychedelic Baby.

In 2008, Russen took interest in the career of a female jazz trumpet player named Cindy Bradley, and got her by Trippin’ n Rhythm Records from the UK.

Historically, Estate of Presley v. Russen from 1981, and tried in New Jersey, set much precedent for impersonators in entertainment. Russen was the producer of The Big El Show, which starred Larry Seth as Elvis, and  began in 1975. It had spawned out a band called Snow that included Seth and Russen. The Big El Show was a touring show, from the Northeastern U.S. to Las Vegas.

On a website about The Big El Show, Russen is quoted: “The single biggest break out event for The Big El Show happen one week after Elvis’ passing. Months before we had been booked to appear at an outdoor concert on the river front in Philadelphia at a place called Penn’s Landing. Due to the passing of Elvis, fan emotions were extremely high and raw. More than 50,000 fans turned out in a driving rain storm to see the Big El Show that night.” 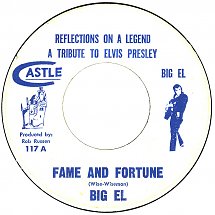 Estate of Presley v. Russen was complicated, but established that Russen had issued albums and 45s using Elvis Presley’s likeness without permission of the estate, therefore establishing all the Elvis Presley trademarks we know today — the jumpsuit pose, the TCB lightning bolt, and more — as belonging to the estate. The case is explored in detail in the book, Entertainment Law and Business, by William D. Henslee and Elizabeth Henslee. From the case (which can be read in its entirety here):

After careful consideration of the various factors, we have concluded that the use of the name THE BIG EL SHOW by itself does not create a likelihood of confusion, but its use as part of the logo or in connection with misleading pictures does create such confusion.

Russen then made a left turn, and went into promoting, producing, managing and booking professional boxers. “I have had major success in professional boxing and have managed and promoted world championship level fighters and co-promoted championship fights on USA, ESPN, HBO, Showtime and PPV on DirecTV,” he listed.

His big one was in 1991, when Undisputed Heavyweight Championship Evander Holyfield was set to face Francesco Damiani on November 23 at the Omni in Atlanta. Damiani pulled out three days before the fight. “They needed an opponent. Well, Rob, is the publicity man and got them to take Bert Cooper,” recalled Corrente. “Of course, at the time, the Holyfield people didn’t have any idea that Cooper was going to end up knocking him on his ass.” It was the first time Holyfield had been knocked down in his professional career, but he did end up winning over “Smokin'” Bert in the seventh round.

Russen’s self-published book, 8…9…10…You’re Out, came out in 2009, and it is promoted as “The story of boxing promoter Rick ‘Elvis’ Parker and the seedy, under belly of professional boxing as seen on CBS’ 60 Minutes.” 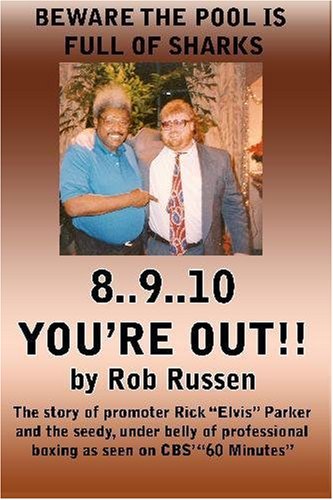 Then there was pro wrestling.

Chances are you have seen his promotion, even if he wasn’t front and center. Russen co-founded NWF Professional Wrestling and IWA Championship Wrestling, which both had wide distribution and various times on major channels/systems such as SportsChannel America, Comcast, DirecTV and the Sunshine Network.

In the AWA, under Verne Gagne, Russen was tasked with making deals on spot shows and charity events, often outside of the traditional AWA territory in the Midwest.

Russen was the one who brought in a future star, dropping the publicity package on his boss’ desk and pushing the hiring.

Dallas Page was running a huge bar in Florida, and had given up on his dream of being a professional wrestler. But he enjoyed hanging out with the wrestlers who came into the club. On a drunken whim, he began toying with the idea of “Diamond” Dallas Page, and created a whole back story. Egged on by his pals, he found some buddies who looked like wrestlers and made a promo tape. He sent it to the AWA, where Russen saw it and called. Not long after learning of Russen’s passing, Page picks up the story:

Two weeks later, Rob calls me up. And he says, “Diamond Dallas Page there?”

Never heard that besides a few weeks ago, but here I’m going with it. I go, “Yes, he is.”

He goes, “This is Rob Russen from the AWA.”

He said, “You know, we’ve looked at your tape, and we like your stuff. Matter of fact, they want to bring you and your boys into Vegas for a tryout. … We’ve got one question. Showing the tape around, everybody likes your schtick. But no one’s ever heard of you. Where are you guys working at?”

After a long pause I go, “Well, Rob, the truth is none of those guys can wrestle.”

I said, “Because it’s like a secret society, trying to figure out how to get into professional wrestling.” I’m thinking on my feet, right? ‘Those guys could be training to wrestle and you could give me someone else to manage.”

And basically it was don’t call us we’ll call you.

Not long after, Paul E. Dangerously left the AWA, leaving a managing void. Greg Gagne called up Page and brought him the promotion, where DDP first managed Badd Company (Pat Tanaka and Paul Diamond). “That’s my Rob Russen story. Without Rob Russen, there’s no f—ing Hall of Famer,” said Page, who kept in touch with Russen through the years.

Russen’s IWA set up shot in Australia, for example, in 2001, a month-long residency at Australia’s Wonderland that brought wrestling back into the spotlight after the Australian promotion had died off in 1978.

The monstrous fan fests that have happened in recent years owe a debt of gratitude to Russen too, as Corrente used Russen’s help to deal with much of the necessary paperwork to run the first three Wrestle Reunion events in the early 2000s.

Russen was married four times. His first marriage, to Janice Russen, went from 1969 to 1985, and produced children Rodney, Eric and Jamie. He was married to Lynn Jesh,  from 1990-1996, and they had a son, Ryan. His third marriage, to Joren “Mary Beth” Bayotas-Russen, had him adding stepchildren Ethan and Chrisha. At the time of his death, he was with Beth Diez Russen and they had an adopted daughter.

In his late 60s, Russen faced cancer, and was told that he had untreatable Phase IV prostate cancer. On his website, Russen credited an organic supplement made of fruits, herbs, vegetables and spices grown in volcanic soil in the Philippines, Formula G-18, for prolonging his life. 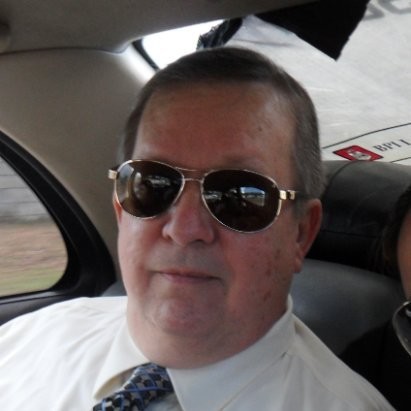 “I am not the most religious man in the world, but it is obvious to me that The Lord sent me an angel (now my wife) and she brought me a miracle (Formula G18) which saved my life,” Russen wrote on his website. “I have been given a second chance at life and happiness for a reason and I am now on a mission to enlighten and inform as many people as possible about this holistic cancer fighting supplement which I can prove saved my life.”

Russen, who had been in poor health for years, died on May 2, 2021 in the Philippines. Funeral arrangements are not known at this time.

Here is a video Russen put together on his YouTube page detailing much of his life:

EDITOR’S NOTES: The date of the IWA trip to Australia was incorrect and has been corrected to 2001; a second amendment was made to include details of Russen’s omitted second marriage, and a fourth marriage — we regret the oversight.