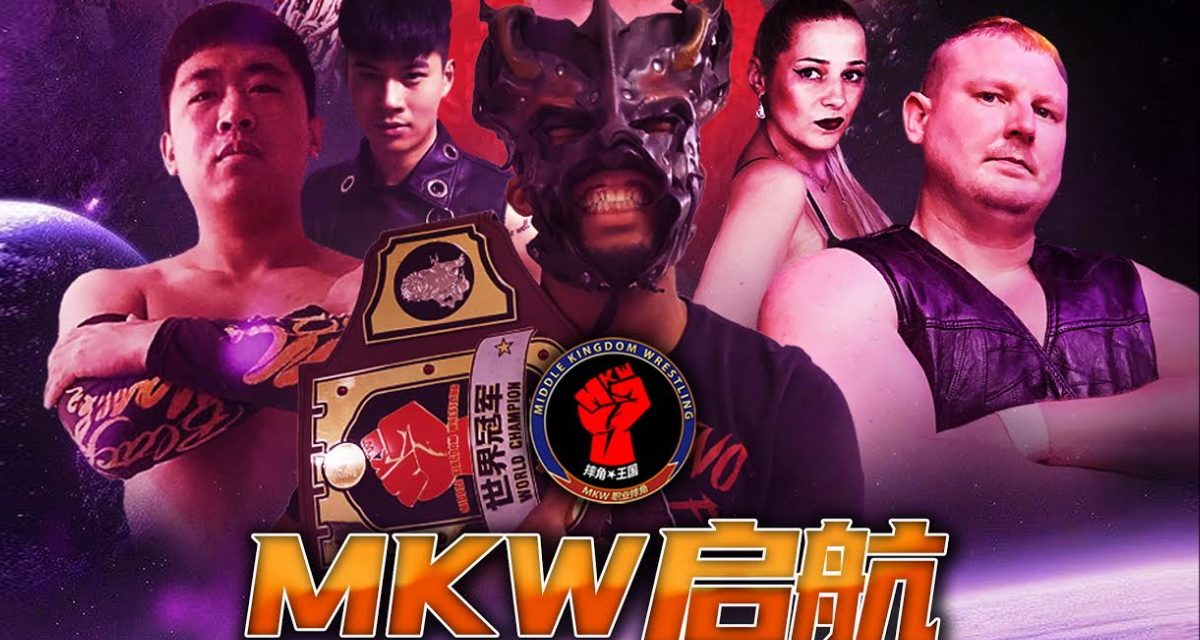 Next week Slamwrestling.net will begin weekly results reports for Middle Kingdom Wrestling’s Blast Off series. But this week it’s the results from last year’s premiere episode along with links where you can watch at the bottom.

Live from the MKW Studio: The Blast Off begins. 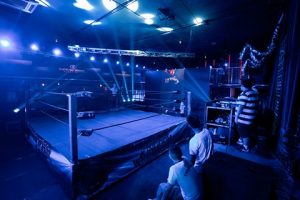 The ring announcer Jianing welcomes everyone back to MKW after a long hiatus due to the pandemic.  Jianing thanks the nurses, doctors and other first line responders and all those who helped deal with the pandemic, in particular the brave people in the epicenter of Wuhan and all across China.

On commentary we have: Captain Xiao Jie Men

Chen seems strangely relaxed. Dragon takes his time getting to the ring and stares down and intimidates the newcomer into his corner. The bell rings and both Chen and Dragon rally the audience to clap in rhythm. Headscissors for headscissors then Dragon gets sent to the outside with a clothesline. Chen’s cut off by a line before he can dive for a two count. Dragon tortures Chen all around the ring. Minimal fight from Chen. After a boot and forearms all to the face Chen’s barely able to stand but somehow sneaks under a clothesline and bounces back with a crossbody block, flying forearm and finally a massive wheelbarrow bulldog. Dragon just growls at him from his knees, seemingly unfazed but is met with a shining wizard. Chen slow two cover and gets a two.
Dragon counters a whip with a dropkick that knocks Chen out. Chen is able to sneak in a forearm that he follows up with a middle rope elbow for a nearfall. But despite now being fully fired up is caught by Dragon’s tilt-o-whirl slam and seamlessly into his signature vice clutch dragon sleeper. Chen can barely muster the energy to tap out. 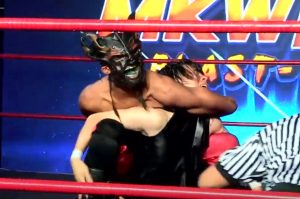 Zombie Dragon with the tap out victory.

Post match Dragon stares Chen down as he struggles to his feet. He offers Chen a handshake and raises his hands before leaving.

M.A waits in the ring while Buffa dances his way there holding his boombox. The two seem to be friends as they begin with a custom handshake. The two seem evenly matched in strength and technique early on. They take turns bouncing off the ropes. After which Buffa hits an elbow drop and fist drop both for two counts. M.A dodges a corner attack to deliver combinations of his own first running at Buffa in the corner then hip tossing him to the middle of the ring where he finally gets his own two after a running knee to the face. M.A takes his time slamming Buffa who finally suplexes him. They are slow to their feet. Buffa with dropkicks but can’t capitalize with M.A in the ropes. A full nelson counter by M.A then a powerbomb counter by Buffa into a victory roll for the three.

A post match mutual show of respect ends with M.A kicking Buffa in the groin and wailing on his head with elbows.

Chairman Al Promo from his condo. He says he has something for Big Sam’s manager Lady Marie as he presents a large black leather case. 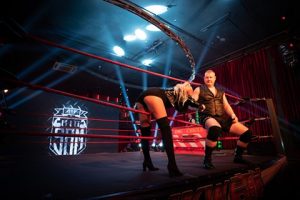 Big Sam gets on the mic and says he will step wherever he wants in MKW.
He blames Zombie Dragon’s title reign for the COVID-19 pandemic and says it’s his responsibility to take the belt back and fix everything.

He asks for a crown to be brought to the ring to crown Lady Marie Queen Marie.

He unsuccessfully demands a chant of Queen Marie and then power bombs the crown bearer young boy out of frustration.

Queen Marie announces herself Queen as she steps on the unconscious young boy.

Sam and Mamba exchange words to start. Sam ends up shoving Mamba inside out to the corner. Mamba with a running shove that staggers Sam. Back and forth exchange of Sam’s power versus Mamba’s speed and smarts. Mamba keeps on top of Sam as he falls through the ropes. But Sam stops him with a knee and then holds him to let Queen Marie slap him. Sam takes his time using the apron and bar countertop on Mamba. Finally in the ring Sam hits a huge body slam for two two counts that look like blatant chokes. Sam uses a variety of chokes on Mamba all around the ring. Mamba reverses an Alabama slam into a sunset flip cover unsuccessfully. Mamba tries to lift Sam on his shoulders but crumbles under Sam’s weight. Another two for Sam. suplex, snake-eyes and a sidewalk with some love for Lady Marie in between but only a two after the trio for Sam. Mamba reverses a choke slam attempt into a Crippler cross face. Sam lifts him with his strength into a fireman’s carry but Mamba delivers some elbows and Sam is downed into a crucifix pin for two. Mamba super kicks for two. Sam tackles his way out of Tornado DDT. Zombie Dragon shows up and green mists Sam’s face allowing Mamba to get the Tornado DDT after all but only for two. Mamba hooks the crippler again and Sam passes out.

As far introducing the company and the main players, this was a good episode. Zombies Dragon was established as a fighting champion, a rivalry emerges between Buffa and M.A., and The Stable remains evident as the main antagonists of MKW.