Chico Cabello may not be a well-known name — he worked way down the card in the heyday of World Class Championship Wrestling, and later under a mask as El Gato Negro in Mexico. But you might have heard of one of the wrestlers he helped train: “Stone Cold” Steve Austin.

Cabello, a second-generation wrestler from Fort Worth, Texas, was the late Chris Adams’ partner in the wrestling school where a young Steve Williams — the future Stone Cold — came to train. 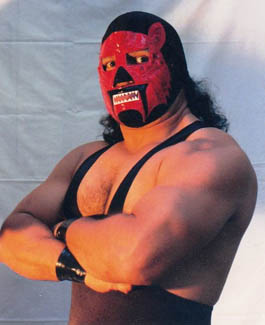 According to Cabello, he taught Austin 80% of the basics, and Adams taught him the remaining 20% to take him to the next level.

So along comes the Cauliflower Alley Club banquet in Las Vegas on April 21, and Cabello is in town visiting old friends and soaking in his first CAC experience.

He hears the story that Austin will be in town to present Jim Ross with the Art Abrams Lifetime Achievement Award.

But Cabello is not confident. “I hope he remembers me,” he confessed to SLAM! Wrestling the afternoon before the banquet. He has seen him last at a Dallas WWE show around 1998.

In a room full of legends, including numerous former world champions, Austin singled out Cabello during his introduction speech for Ross — sort of.

“Can you believe he stood there and acknowledged me in front of everybody?” asked Cabello, calling it an “unbelievable” moment.

While Cabello’s name may not be hugely well known, with or without the mask, the story of a second-generation wrestler will sound familiar to many, except that his father never got to see him compete. 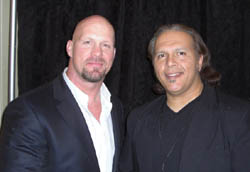 “My father got away from wrestling for a while and I didn’t get introduced until 1980,” Cabello said. “And I had to beg my father to teach me, for three years he wouldn’t teach me, I don’t know why. He decided to teach me, then he teach me the basics, which is the breaks, the falls, the referee staying, then he passed away. The rest was up to me.”

“My dad opened the doors with his name,” admitted Cabello. “He showed basic stuff, but then he passed away a year later. I had very good trainers. I can say I had Mr. Gran Markus from Mexico, he’s also gone. Then I had another very good wrestler called the Colombian Tiger, which was excellent Olympic-style, Greco-Roman wrestling, very knowledgeable in the five styles of pro wrestling. Then the rest is just the basics from Olympic, Greco-Roman, to freestyle, judo, ju-jitsu, then of course, professional wrestling. That’s how I got myself into it.”

His father, Chico Cabello, who was born in Mexico, as was his wife, wrestled in the Dallas Sportatorium in the 1950s, and an injury derailed his career.

“In 1958, he busted a ligament so I didn’t get to watch my dad wrestle because I was born in ’61,” said his son. “I remember his pictures, his movies, when he used to work against Duke Keomuka, Gorgeous George, Lou Thesz, many popular wrestlers back in the day.”

Once his father let him through the curtain, Cabello knew he wanted to be a professional wrestler.

Early on, it was tough to get a break as World Class was taking off, he said.

“When I started, I wasn’t on the big stars card. Sometimes I would work, they had so many shows around, spot shows,” the 230-pounder recalled. “That’s how you would start. I was in that area. I started in ’82, and didn’t get a chance to wrestle in the Sportatorium until ’86. Can you believe that? It took four years for me to get to the Roy Rogers Coliseum in Fort Worth and the Sportatorium in Dallas. Four years of spot shows.”

There was an incredible array of talent in World Class. 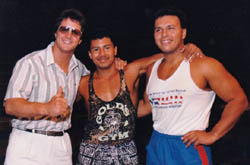 “I was there when the Freebirds had their feud with the Von Erichs. It was one of the best times when Gino Hernandez and Chris Adams, they used to be the Dynamic Duo, they had feuds also with the Von Erichs,” he said, adding that Adams was a real mentor. “I can tell you when there were so many things going on, Sunshine, Jimmy Garvin, the Freebirds,” he said, praising the forward-thinking of the people behind the scenes, including owner Fritz Von Erich.

Very early in his career, Cabello got his one and only chance to go to Japan. It was a happy accident, as his friend, Taurus, injured his leg and couldn’t go to Japan, where he was working as Super Máquina.

“It’s rough, just like Mexican wrestling. I got to work with Antonio Inoki and Tiger Mask,” Cabello recalled of the lone tour, singling out his bout with the original Tiger Mask (Satoru Sayama). “It’s beautiful. It’s on YouTube, you can see the video there.”

Sayama was “unbelievable. Just like a tiger, man. Acrobatic moves. He was just a very good wrestler. He got all his training in Mexico, actually.”

Over the years, Cabello was loyal to World Class.

“I stayed in Dallas, the Sportatorium, because it was so popular. We had so much work, to the point there was no need to go to WCW or NWA or Tennessee or USWA or even WWF. We had such a nice business going in Texas,” he said.

But it is impossible to talk about World Class without the misfortunes.

“I don’t want to talk about the tragedies, but then business started decaying,” Cabello said. “I saw there was the opportunity, it was time for me to change my name when the USWA came to Texas and took over; that’s when I decided to become El Gato Negro.” 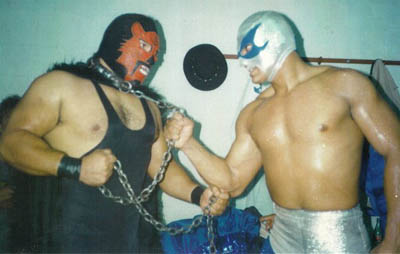 Cabello as Killer Katt, left, against Lizmark Jr. in Monterrey, Mexico, in 1994.

He took the new personality on the road, traveling to Tennessee, Kentucky, Louisiana, Indiana, Florida, and then, finally, in 1991 to Mexico. Other names he used included Golden Chicano and Killer Katt.

Like the Golden Chicano, Killer Katt is a bad guy name. “El Gato Negro is a babyface in the United States,” Cabello said. “In Mexico, and Central America, they changed me to the Killer Katt, which is a heel name. That’s just a thing that they did. I wanted to be a babyface. Sometimes promotions want to do something different, so we kept the cat figure and just changed to Killer Katt.” 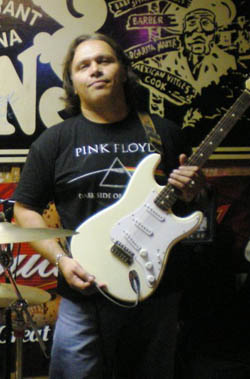 Cabello as “Gary Russo” in his band, Texas Rockero.

In 1997, Cabello stopped wrestling full-time, when he met his wife. They have four children and live in the Dallas area.

“I never stopped wrestling, I just laid off for a while,” he said.

“The business changes, you always have to have your high school diploma and your Plan B, just your other life, your real life,” he explained. “I am in computers, I graduated in computers, and I’m also a talented musician and I have a band in Texas. So I keep myself busy with the band and the computers.”

And, like in wrestling, when he performs classic rock, blues, Latin and Texas music with his band, Texas Rockero, Cabello assumes another identity — Gary Russo.

“It’s a weekend thing. I’ve had the band about 10 years,” said Cabello. “I separate the wrestling from the music, my friends in the band, they only know Gary Russo as a musician from the Texas Rockero. Then El Gato Negro, Chico Cabello, that’s for my wrestling. I separate both personas. They don’t mix.”