Conrad Thompson will be front and centre at Starrcast, a part of the All In weekend. He’ll be a busy boy too. Not only is he one of the organizers of Starrcast, he’ll also be co-hosting live podcasts with Tony Schiavone and Bruce Prichard.

Starrcast was conceived as “the convention partner for All In,” said Thompson.

It’s all happening at the Hyatt Regency Schaumburg in Schaumburg, Illinois, just outside the city of Chicago, where All In takes place on Saturday, September 1st at the Sears Centre. Starrcast starts on Thursday, August 30, with a podcast by Bruce Mitchell, followed by unique events, like Bruce Prichard debating Eric Bischoff, karaoke with Marty Scurll, and Botchamania which looks at some rather funny miscues through the years. Friday has video games, panels, and the All In weigh-in and press conference. On Saturday, you can do yoga and more with Diamond Dallas Page, remember Andy Kaufman, and, if you are not actually attending the sold-out All In, you can watch it all together at a viewing party — a throwback to the days of closed-circuit television.

With Schiavone on the What Happened When… podcast, Thompson teased what was to come at noon on Saturday with what’s being called “WHW Monday Live!”

“We’re pretty excited about it, because we’ve got a really fun show planned, with a cast of characters,” he said. “The format of the podcast is we don’t do guests, but we’re going to have a ridiculous cast of characters joining us here. This will be a tremendous time. It’ll only be the second time that Tony and I have done a live show like this. Our first one was really a supershow, with myself, Bruce and Tony. But this one will be, What Happened When… all your favourite gags and bits with a couple of run-ins that should get people pretty excited.”

A live podcast would seem like an oxymoron of sorts, but Thompson said that he saw it coming as a concept, at least in some ways.

“I didn’t imagine that we would be running a convention with All In and it would sellout as fast as it did,” he began. “But I did, once we ran one show with Bruce Prichard [of the Something to Wrestle with Bruce Prichard show], I did envision, ‘Hey, we would could take this on tour, and do this with other shows.’ I did think there was an opportunity for some of that. Now, it’s happening, and it’s been way, way, way more successful than Bruce or myself or anybody would have imagined. But to say, ‘Did you even imagine you would do live shows?’ Yes, but not that people would have such an appetite for it, and we’re very thankful, and very blessed that they do.”

Since Thompson is one of the leading wrestling podcasters in the world, having gained a large amount of notoriety teaming with Ric Flair on a since-finished podcast (and a fiancée in Flair’s daughter Megan), he’s the man to ask — is there a limit to how many podcasts there can be? It seems everyone (and their dog) has one now. 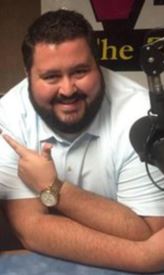 “I think we’re over the limit right now,” he said. The proverbial bubble has burst. “And I don’t think that everybody has quite caught on to that yet. But that’s the reason that you see some of the movement behind the scenes with Podcast A going to Company B in the middle of the night. Behind the scenes, the revenue mechanisms of this is a sales team, and if that sales team can’t generate the revenue, eventually guys are sitting around putting all this work and effort in, to varying degrees — we know some guys put a lot of effort into their podcasts, and maybe others not so much. But the result is, some guys are doing really very well, and other guys aren’t making anything, and I mean literally nothing. That model will come to an end. People won’t continue to work for free forever, something has to give.”

Contraction is inevitable, he said. “I think you’ll start to see the industry compact a little bit. I think you’ll start to see podcasts fade away, and others will pivot, and they’ll create new revenue streams, which is essentially what we’ve done. We didn’t just wait on ad sales. The genesis behind all my podcasts was to sell mortgages, as crazy as that sounds. I want to build an audience, I want them to know me, like me, and trust me, and then use me for their mortgage. That was the plan. And then along the way, we were able to sell ads, and along the way we were able to sell T-shirts, and now other pieces of merchandise — even baby onesies, as ridiculous as that sounds. But now we’re doing the actual live shows as well.”

Like Starrcast, with its “Podcast Row” with 33 different podcasts listed as appearing, as well as plenty of autographs for sale, and wrestling merch overflowing on table after table at the hotel.

Even if it all shakes down after Starrcast, Thompson is confident he’ll still be out there podcasting. “The reason that I have a lot of confidence that my shows are going to stick around, is not only are we focused on content creation, but we’re focused on revenue creation, that some of the other shows, I feel like, are really driven by entertainers. They consider themselves talent, and say, ‘Oh, somebody else was supposed to do all that.’ Eventually, all that will dry up, and I think that’s happening sooner rather than later.”