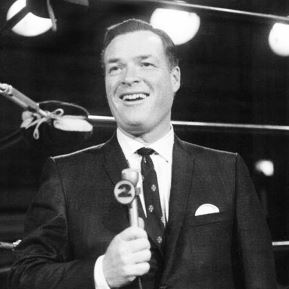 Walt Harris, who died on August 18 at the age of 97, was the announcer for pro wrestling and roller derby in San Francisco from the 1940s into the early 1970s. He shared some of his memories back around 2005 with me.

The 83-year-old Harris was living in San Jose at the time, and was comfortable going back in time, in part for my book, The Pro Wrestling Hall of Fame: The Tag Teams, written with Steven Johnson.

“I’ve worked in the radio and television business my whole life, going back to ’44,” said Harris. “I’d done a lot of sports here and there and everything else.”

Indeed, to say that he was just a roller derby and wrestling guy would be wrong. He was a morning news anchor, hosted a music show for a time, and produced sports. He also directed and produced San Francisco Giants games for television from 1972 to 1986, when he retired.

Originally, Harris went to Pacific Lutheran College in Tacoma, Wash., and then a broadcasting school in Beverly Hills, Calif. His first gig was on radio in Albuquerque, New Mexico, before working in Tacoma, and then San Francisco in 1949, the start of an epic run at KFRC.

“When TV came, that was the end of radio. The owner of KFRC owned Channel 2 and I was the first one he talked to — the first employee,” Harris told Georgia Lambert of the Contra Costa Times in 2011. “I was the announcer for Dell Courtney’s Search for Songs, with a cast of singers and an orchestra, and I did the Morning News at 6:30, in addition to roller derby and wrestling.”

The wrestling promoter in San Francisco at the time was Joe Malcewicz, and Harris began with him, though Malcewicz’s business was on the downswing.

“Joe just wouldn’t admit what he was doing,” recalled Harris. “He couldn’t promote wrestling, because he had the same match in each town. Everything was the same. So he couldn’t promote his TV. In fact, he stuck me real good one time. We were doing a show out in Modesto. The TV station that I worked for had a transmitter … that had a tremendous signal. The match ended about 40 minutes early, and I had to fill. I interviewed everybody in the house for 40 minutes. He said, ‘Well, gee, I don’t have no control over this.’ ‘Yeah, you left me hanging.'”

For the longest time, Ben and Mike Sharpe, two giants originally from Hamilton, Ontario, were the top stars for Malcewicz, and also in Japan.

Harris marveled at the memory of the Sharpes. “I was walking by the Civic Auditorium in downtown San Francisco one time, and these two guys were walking ahead of me with suitcases. I guess they’d just come to town. By God, they were the biggest men I’d ever seen in my life at that time! Mike and Ben Sharpe, they were huge.”

According to Harris, Malcewicz was only drawing 1,200 people or so to San Francisco’s Cow Palace when former wrestler “Professor” Roy Shire moved west to challenge him as a promoter.

It was a great time, said Harris, because Shire knew the changing tastes in pro wrestling, where Malcewicz did not. “[Shire] knew how to put on a show and we had some great characters.”

So many great names came through San Francisco, some on their way to touring in Japan.

“I found the best guys were the villains. Really,” said Harris. “[Kinji] Shibuya, he’d go to Japan and send me cuff-links and stuff.”

Harris considered King Curtis Iaukea one of the best interviews ever. “He could run the whole scale. He could be up and down and over and funny and grrr. He just had a flare for it. You could just sit and listen to him talk when he’d come out for an interview.”

Then there was the great tag team of Pat Patterson and Ray Stevens. Harris was there at the beginning of their epic run.

“I used to tape shows in Fresno, San Francisco and Sacramento. One time, the promoter couldn’t make it to Fresno and he asked me to run the show for him. There was a guy going through there that had called and asked for a show so he could have a few bucks on his way to Arizona. It was Patterson, with dark hair. The way he performed, I thought, he’s just like Stevens. I told Roy Shire, ‘You know, you ought to get this guy back. Maybe he’d make a great partner.'”

The pairing was magic, part of the reason they were ranked number five all time in The Pro Wrestling Hall of Fame: The Tag Teams.

“I had great interviews with Stevens and Patterson,” recalled Harris. “I’m about 5’11” and a couple hundred pounds. I thought, ‘We’ll make these guys look bigger’ because they’re big, bruising wrestlers. I put them on boxes alongside and I stood in the middle. When I said goodbye, they stepped down.”

Sometimes it was fun, too, he said. “Shire used to get mad at us every once in a while. You can’t help breaking up once in a while. With Stevens, I was doing an interview and something struck us both funny and we just couldn’t talk. We had to do it two, three times, and Shire kept getting madder and madder because we were taping an interview for someplace, probably in Hawaii.”

Harris didn’t remember exactly when he stopped as an announcer with pro wrestling — it would have been about ’71 or ’72 — but Harris sure recalled why he had to stop.

Hank Renner replaced Harris on San Francisco wrestling broadcasts. “He used to follow me around. They said he sounded just like me because he used to say everything I used to say,” chuckled Harris.

With roller derby, Harris used to fly out east for events for weekends. “My only wish is that I could get as excited at a sporting event as they did. It would be wonderful to lose yourself,” he said.

His old wrestling buddies did not forget him. Toru Tanaka dropped by the station one day. “He left a note on my desk. ‘Buddha bless you.'” 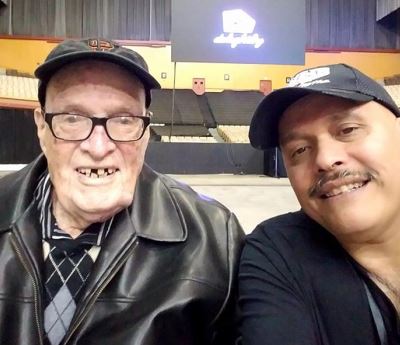 Harris made an appearance in November 2017 at an All Pro Wrestling card at the Cow Palace.

According to the 2011 story, Harris and his wife, Carmel, lived in San Jose until moving to Danville, Calif., in the mid-2000s. They were married June 10, 1949, in what Harris called “the biggest wingding in my life” in the same story. She died a few years ago.

Greg Oliver is the Producer of SLAM! Wrestling. He can be emailed at [email protected], and you can follow him on Twitter @gregmep.