Kiniski’s journey in wrestling began after his family moved from tiny Chipman, Alberta, to the provincial capital of Edmonton in the early 1940s, when Kiniski was 12 or 13. When Kiniski reached high school age, he enrolled at St. Joseph Catholic School, which in 2018 is the oldest Catholic high school in Edmonton. St. Joseph, built in 1931, was an all-boys’ school during its first two decades, and Kiniski — already six feet tall with a powerful build — took advantage of an apparent lack of distractions on campus by throwing himself into sports, particularly wrestling and football.

As far as wrestling was concerned, much of Kiniski’s training during his seminal years as a wrestler took place at the YMCA under the tutelage of Leo Magrill. In a November 19, 1971, feature by John Kirkwood in The Province, Gene Kiniski said, of Magrill, “He was the rasslin’ coach there, a fine rassler and he never got a cent for it. That’s a person I’d have to say I have a great deal of respect for because he really gave me my foundation. He was my guiding light.”

Decades later, in the February 2004 Point Roberts, Washington, All Point Bulletin, Kiniski reflected on his experience on the amateur mat back in Edmonton, telling writer Tavish Bradbury, “At 15, I was bigger and stronger than everyone else. I would be wrestling 30 and 40-year-old men at the YMCA, and I cleaned the mats with ’em. … I would wrestle anybody, and I usually won. No one wanted to get out there with me. So I began wrestling local coaches, older men, and I beat them. They couldn’t believe my strength and endurance and wanted to know who this kid was.”

Kiniski began competing in tournaments at the provincial level, and at least once, in 1947 at age 18, he was listed as a competitor in the dominion amateur wrestling championship, which that year was held, apparently outdoors, in Athabasca, Alberta. While the name of the tournament suggests the competition was Canada-wide, entrants were limited to participants in programs in Montreal, Winnipeg, Vancouver, Calgary, and Edmonton. Kiniski was slated to compete in the 191-pound division, along with two other competitors, though it is unclear where he placed in the tournament. In their book The Pro Wrestling Hall of Fame: The Heels, Greg Oliver and Steven Johnson report that Kiniski faced fellow future Canadian pro wrestling legend Maurice “Mad Dog” Vachon in the tournament. 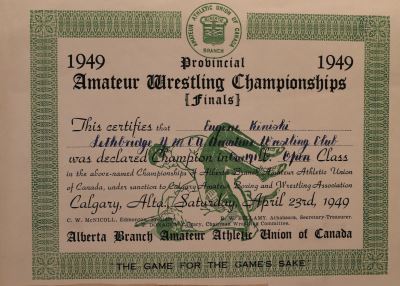 While a young Gene Kiniski did not have a lot of serious competition as an amateur heavyweight wrestler in Alberta, he certainly made the most of the opportunities he did have. Kiniski captured this provincial amateur heavyweight title at age 20, just a few months before he began his first stint with the Edmonton Eskimos.

At the provincial level, meanwhile, Kiniski took anywhere from two to four provincial titles in amateur wrestling in the late 1940s, depending on the source. An Alberta Amateur Athletic Union of Canada certificate declares Eugene Kiniski the winner of the open class championship in wrestling at the provincial competition held in Calgary on April 23, 1949.

After playing a strong season as a defensive lineman with the Edmonton Eskimos, Kiniski, unhappy about the low pay he’d received from the Eskimos, landed at the University of Arizona on a football scholarship and put in two strong seasons on the gridiron before returning to his hometown Eskimos for the 1952 season, which saw him suffer a devastating knee injury.

It is well documented how it was during his time at university in Tucson, Arizona, that Kiniski got the pro wrestling bug, made the acquaintance of Tucson promoter and fellow Edmontonian Rod Fenton, and started working out with wrestlers traveling the Southwest circuit — most notably Texas legend Dory Funk Sr. There are also accounts that Kiniski, while attending university under NCAA restrictions governing amateur athletes, slipped across the border to Mexico on occasion to wrestle under a mask at a pro wrestling show.

But news clippings of the day also indicate Kiniski did some competitive amateur wrestling in Arizona, where he decisively earned a state heavyweight title. Some sources indicate Kiniski took the state title twice and owned the Border Conference Heavyweight title while attending the University of Arizona. In some circles over the following decades, he was recognized as the only individual ever to have won both a Canadian provincial and a state amateur heavyweight championship. Whether or not Kiniski actually was the first or only person to have done so, newspaper accounts and anecdotes from the time do indicate Kiniski pulled off the rare double feat he was credited with.

After leaving university following the 1951 football season, Kiniski began his professional wrestling career in the Southwest and achieved early success. But after mulling over football offers — including a legitimate NFL offer that came to naught due to his premature departure from university — Kiniski returned to the Eskimos, spending one season mainly sidelined due to injury before making a strong comeback the following year. Following his 1953 season with the Eskimos, Kiniski got married and headed off for a full-time wrestling career.

During his years as a professional wrestler, Kiniski struck up strong friendships with fellow professionals who had been top amateur wrestlers — most notably Dick Hutton, Verne Gagne, and Jack Brisco. But otherwise, while Kiniski was known to appreciate and befriend fellow wrestlers with “legitimate” sports or wrestling backgrounds, his ties to amateur wrestling would not fully be restablished until his own sons began to wrestle in the 1970s.

When Gene’s elder son Kelly Kiniski was a strong high school wrestler in Washington State, Gene liked to bring “legitimate” grapplers from the All-Star Wrestling promotion he co-owned to the family home in Blaine, Washington, to work out with Kelly. A few years later, when second son Nick Kiniski wrestled at Simon Fraser University, Gene, credited as one of Nick’s early trainers, was a conspicuous supporter of Nick — an elite superheavyweight who would become a member of Canada’s national wrestling team and an alternate for the 1984 Olympics — and the entire SFU wrestling team. Most memorably, Gene Kiniski is credited with helping Bob Molle, Nick’s roommate at Simon Fraser, bounce back from a serious back injury and surgery after barely two weeks — just in time to compete as a freestyle wrestling super heavyweight and to win a silver medal at the 1984 Los Angeles Olympics.

Mike Jones headed SFU’s wrestling program when Nick Kiniski and Molle were key members of the team and for many years afterward. According to Jones, even when Nick and Molle were no longer associated with the team, Gene Kiniski continued to show his support. “He would come to a few of the matches, and of course every now and again, as we were making a road trip back, we’d stop at his place, and he’d ask how things were going,” said Jones. “He was always supportive of it, and anytime we had an event that we wanted him to come and be involved with, he’d come.”

After Gene Kiniski passed away in 2010, attending his Celebration of Life at Kiniski’s Reef Tavern in Point Roberts, Washington, were family, friends, wrestling fans, and, according to Nick Kiniski, owner of the Reef, people “from every walk of life.” Also in attendance were wrestlers from Simon Fraser University, where Nick had been a star athlete, and his father, a major booster. Donations made in Gene Kiniski’s memory were earmarked for the Simon Fraser wrestling program — an endowment fund that survives to this day and keeps alive Canada’s Greatest Athlete’s long and intimate association with amateur wrestlers and amateur wrestling.

Photo at top: While Kiniski attended the University of Arizona from 1950–1951 on a football scholarship and played two seasons for the Wildcats, he also held the Arizona amateur heavyweight wrestling championship before kicking off his professional wrestling career in Arizona in 1952.