DDP bringing the bang, x2, to All In

“All In” is one of the most anticipated wrestling events of the year and it is taking place at the Sears Center in Chicago on September 1st. The brainchild of wrestlers Cody and the Young Bucks is not just a one-day event, but has turned into a massive wrestling-themed weekend.

Conrad Thompson, who is better known to grappling fans as the co-host of Something To Wrestle With Bruce Prichard has organized a huge “Starrcast” wrestling convention at the Hyatt Regency Schaumburg, just outside of Chicago. Over 100 wrestling stars of the past and present will be on hand to meet with fans for photo opportunities, participate in question and answers sessions, or if you are a Marty Scurll fan, then you can see him lead an Elite karaoke session. You can also listen to live podcasts, especially one from the original king of the genre Colt Cabana. 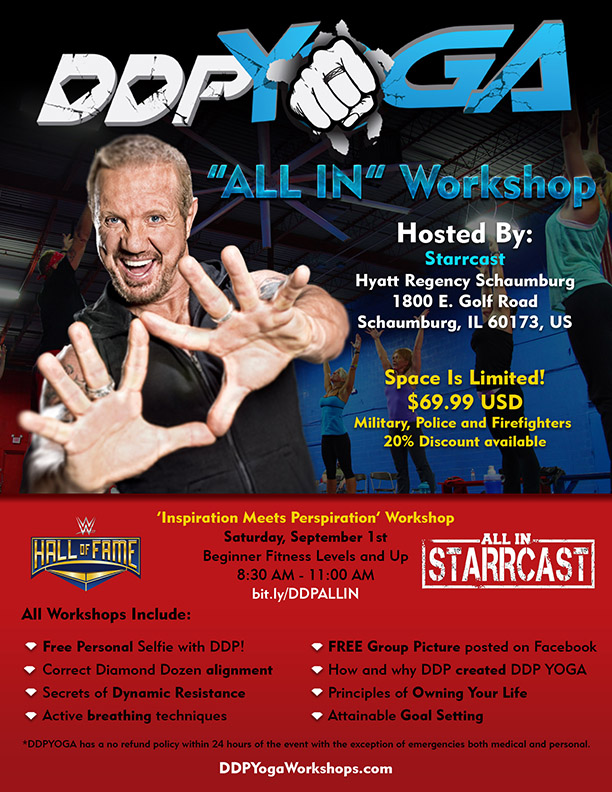 Two unique events at the convention feature WWE Hall of Famer and former WCW world champion Diamond Dallas Page. Over the last decade Page has become known not just for his wrestling exploits, but for his work helping everyday people becoming their best selves.

Page developed an exercise program known as DDPY that features movements from yoga, incorporates old school calisthenics, sports rehabilitation therapy and dynamic resistance. This program has become a hit with people across the globe that use his DDPY app and DVDs religiously.

At the Starrcast convention Page’s first event is on Saturday, bright and early at 8:30 a.m. — a DDPY All In workshop.

“I am doing a DDP Yoga workshop on the Saturday morning that All In is going on,” said Page in a recent interview with SLAM! Wrestling. “We have workshops all around the world really. We have them in the UK, Australia, Canada and all over the country.”

For wrestling fans who have not met Page in person be prepared to interact with a highly positive, extremely energetic and passionate person. What will the workshop look like at All In?

“It is an all intensive; it is inspiration meets perspiration that gets people inspired,” said Page. “I teach them how to do the basic movements and then I take them through a workout. We are doing DDPY. Why do I call it DDPY, because I want people to stop f—ing calling it yoga. We do some yoga positions that are really helpful and help strengthen your core and relieve back pain and just build strength for the overall body.”

The following day Page invites everyone to start the day with a bang! “While we are at the event I am also doing a breakfast the next day that is going to be a big deal,” said Page. “We will have a ton of people in there for a Q and A and breakfast with DDP.”

Page will take the stage to share inspirational stories about his journey through life and he will bring along a few friends for a panel discussion where you can ask the questions.

All In weekend is special for Page because he gets to interact with his fans and reconnect with old friends from the wrestling circuit. “The All In one is a big one because 50 per cent of the people who do my program are wrestling fans,” said Page. “Fifty per cent found me through inspirational videos such as The Resurrection of Jake the Snake or Arthur’s videos.”

Chicago will be the centre of the wrestling universe and for wrestling fans it is going to be an exciting time.

Caleb Smith is still taking on Dallas Page’s DDPY challenge! Check out All In and celebrate all things wrestling!