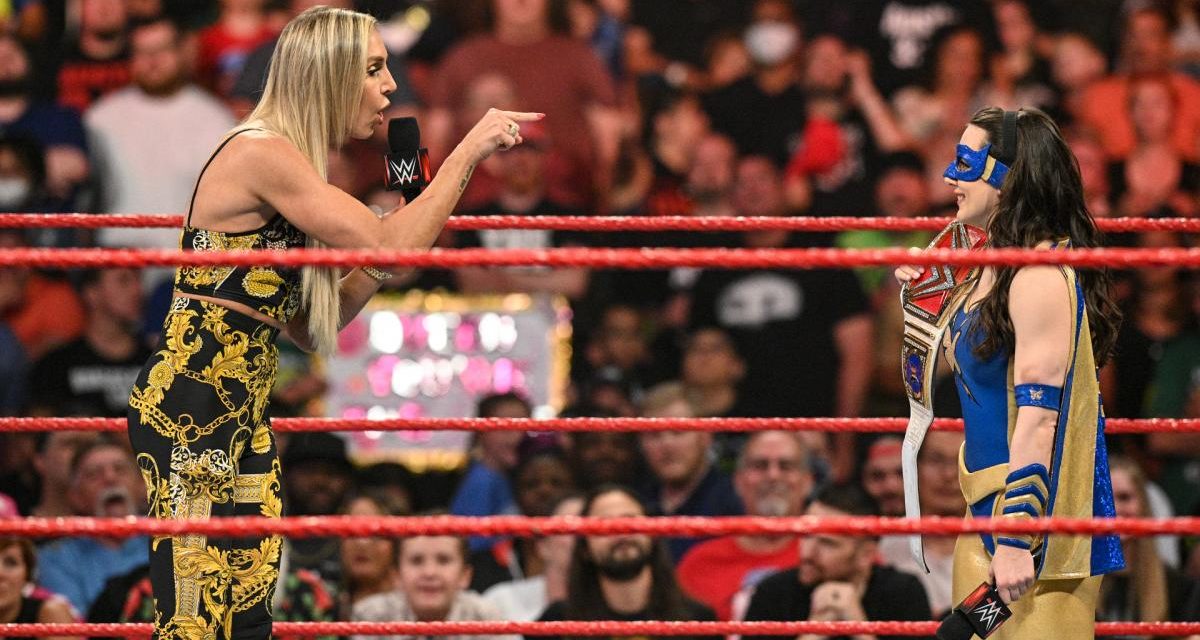 Last week’s Monday Night RAW had everything; a live crowd, John Cena, a Money in the Bank cash-in, a title change and (checks notes)…Goldberg. Well, they all can’t be winners. Will tonight’s show reach the bar that was set last week? Probably not, but SummerSlam is fast approaching and there is work to be done. Into the the T-Mobile Center! That just doesn’t have the same ring as into the ThunderDome.

Nikki ASH didn’t let the Money in the Bank contract gather dust and successfully cashed it in last week on Charlotte Flair to win the RAW Women’s title. Tonight is her coronation. Nikki tells the WWE Universe that putting on the costume gave her the confidence to believe in herself and win the title.

Charlotte Flair interrupts the proceedings. She calls Nikki and disgrace and that her fairy tale story will not have a happy ending. She blames Rhea Ripley for her loss, which is fair, but then claims Nikki stole her title. Flair is going to get her rematch at SummerSlam and will take back her title.

Rhea Ripley walks out accusing Flair of getting intentionally getting disqualified in their title match last week. Rhea wants a match with Nikki Cross at SummerSlam.

Adam Pearce and Sonya Deville come out to diffuse the situation; making the SummerSlam match a Triple Threat. Flair isn’t pleased with this decision and demands a match against Nikki tonight. The champ accepts.  Charlotte goes after Rhea; knocking her to the floor. Nikki avoids a clothesline from Flair and drop kicks her out of the ring.

Earlier in the day, Priest called out Sheamus for being a bully and coward.

The match has been announced as a “Contender’s Match”, so if Priest wins he will get a title shot. Sheamus with a headlock takedown and then takes down Priest with a shoulder block. A back elbow slows Sheamus and Priest sends him over the top rope with a clothesline. Sheamus catches Priest on the outside and slams him onto the apron.

After a commercial break, Sheamus is clubbing Priest over the back. Damien with a clothesline that takes down both men. Priest unloads with strike and a spin kick knocks off Sheamus’s protective face mask. Sheamus pulls himself up on the turnbuckle, but Priest catches him. He chokeslams him off the tope rope, but it’s not enough to get the pin. Sheamus counters the Reckoning with an Alabama Slam, but it’s not enough to get a three count.

After the match, Sheamus is screaming that Priest broke his nose.

Erik opens with a double knee strike and Ivar tags in to crush AJ in the corner. The two team up to take Omos off the apron, but he is still on his feet. Erik and Ivar hit the Viking Experience on Styles, but Omos pulls Erik off the pin to save the match. Omos then slams Erik into the barrier.

Styles hits a tornado DDT on Ivar, but can’t get the pin. Ivar ducks a kick and tags in Erik to double team Styles. Ivar grabs Omos from the floor to distract him, but Styles kicks out of the pin. Omos kicks Ivar into the barrier and Erik takes  a Pele kick. Omos tags in, slamming Erik to the mat. Omos stops Ivar from saving his partner and hits Erik with the double handed choke slam. Styles tags in, hits the springboard 450 splash and covers to get the pin.

Before the match, Jinder wants an apology for the beating he put on Shanky. Drew refuses, so Jinder introduces his attorney to McIntyre and threatens to sue him. Drew tells him to shut up and wants the WWE Universe to decide if he should apologize or just beat up Veer. They go with option two, of course.

McIntyre has his hands full with Veer to start the match. It doesn’t help that Jinder distracts him by slamming a chair on the apron. Veer kicks McIntyre to the mat and follows with mounted punches. Drew tosses Veer across the ring with an overhead belly to belly suplex. Jinder slides the chair to Veer, but McIntyre hits a Claymore kick on the chair. The ref calls for the bell.

After the match, Drew stares down the attorney and tosses him into the ring. McIntyre takes him out with a Claymore kick.

Eva Marie and Doudrop vs. Natalya and Tamina – Non-Title Match

I’m sensing a pattern here. All non-title matches are now being called “Championship Contender” matches. After a cross body to Tamina from Doudrop, Eva calls for the tag. The match is then interrupted by Lilly and a video for the Lilly-lution. Eva flips out, allowing Tamina to hit her with a superkick and cover to get the pin.

Winners via pinfall: Tamina and Natalya

After the match, Natalya is helped backstage; favoring her leg.

Keith Lee hits a belly to belly suplex and then knocks Kross to the floor. Karrion drives Lee into the ring post and the hits an exploder suplex on the floor. Back in the ring, Kross delivers a DDT, but can’t get the pin. Karrion locks in the Kross Jacket. Lee powers his way out and takes down Kross with a clothesline. He follows with a head butt and a bowls Kross over with a shoulder block. Lee looks for the Spirit Bomb, but Kross counters with a Saito suplex. Karrion hits Lee in the back of the head and locks in the Kross Jacket. Lee fights but eventually taps out.

Backstage, Sarah Schreiber gets a word with Nikki ASH, who accepted a match with Charlotte Flair, tonight. She believes in herself and no one can take that away from her. Rhea Ripley interrupts, but says she respects her beliefs. Rhea believes she will walk out of SummerSlam with the title though.

Mace and T-Bar vs. Mansoor and Mustafa Ali

Before the match, Ali tells Mansoor to follow his lead. Well, Mace and T-Bar put a beating on Ali. Mansoor has to break up the pin. T-bar takes out Mansoor with a big boot, knocking him off the apron. Ali avoids a clothesline and connects with a spin kick. Mansoor gets the tag and takes the fight to Mace. An enziguri rocks Mace and he follows with a reverse DDT. T-Bar breaks the pin with a boot that sends Mansoor to the floor. Ali flies through the ropes and spikes T-Bar with a DDT. Mace grabs Ali on the apron, and Mansoor breaks the hold with a kick. Mace looks for a chokeslam but Mansoor counters with a roll up and gets the pin.

After the match, Ali pulls Mansoor out of the ring, saving him from a beat down.

WWE Champion, Bobby Lashley, heads to the ring with MVP to answer the challenge laid down by Goldberg last week. Lashley will not dignify the challenge with a response, because he will not be disrespected in his ring by anyone.

Cedric Alexander interrupts. He is still salty over getting let go by the Hurt Business and wants a shot at the champ. Shelton Benjamin joins the party, running down Cedric. He wants to give Bobby a real challenge. MVP tries to dismiss both men, but Lashley says he will take them both on at the same time.

Lashley dispatches of his old colleagues. Cedric and Shelton put up a good fight, but the champ is too much. Lashley takes out Benjamin with a jackhammer and then finishes Cedric with a Dominator. He stacks the two up and covers both to get the pin.

Backstage, Miz and Morrison are checking on the drip sticks. AJ and Omos walk up and he needs to talk to them about something important. Styles huddles with the two as Omos acts as look out.

Well, that meeting that AJ Styles proposed was apparently about how to influence this match. Styles and Omos make their way to ringside. Riddle looks for an RKO, but Morrison blocks it and hits a leg lariat. Styles grabs Riddle’s scooter and has Omos break it over his knee. The distraction allows Morrison to slam Riddle from the top turnbuckle and then hit Starship Pain. Morrison covers and gets the pin.

After the match, Styles puts the boots to Riddle. He hits the Styles Clash in the middle of the ring.

Truth is wearing a microphone during the match and tries to talk Reginald into giving him the title. Reggie frustrate Truth with his flips, causing him to miss a splash in the corner. Truth then crashes into the ropes. Reginald flips onto him and gets the pin.

After the match, Reginald back flips his way up the ramp to avoid all the 24/7 challengers.

Flair once again blames Rhea Ripley for costing her the Women’s title.

Charlotte takes Nikki down with a clothesline and follows with chops in the corner. Flair tries to pull off Nikki’s mask in a show of disrespect. Flair stomps on Nikki and then chokes her on the ropes. Nikki tries to fight back with forearm shots, but Charlotte crushes her in the corner. Nikki counters a suplex with a a cradle, but Flair kicks out. Nikki with a head scissors and the drop kicks Flair through the ropes. On the floor, Flair tosses the champ over the announce table as we go to commercial.

After the break, Flair is still in full control until she gets caught up on the ropes. Nikki with a bulldog, but still can’t get the pin. Flair chops the champ into the corner and sets Nikki up on the top turnbuckle. Nikki counters with a tornado DDT. The champ goes up top and hits the flying cross body, but Flair rolls through and is able to get the pin.

After the match, Kevin Patrick gets a word with Flair. She wants to know why she is being congratulated. She runs down Nikki, telling her that no one is in her league. Nikki says she almost could have won and has the confidence that she can. She challenges Flair to a rematch next week. Flair accepts and then decks her. She hits a boot and then poses over Nikki as the show goes off the air.