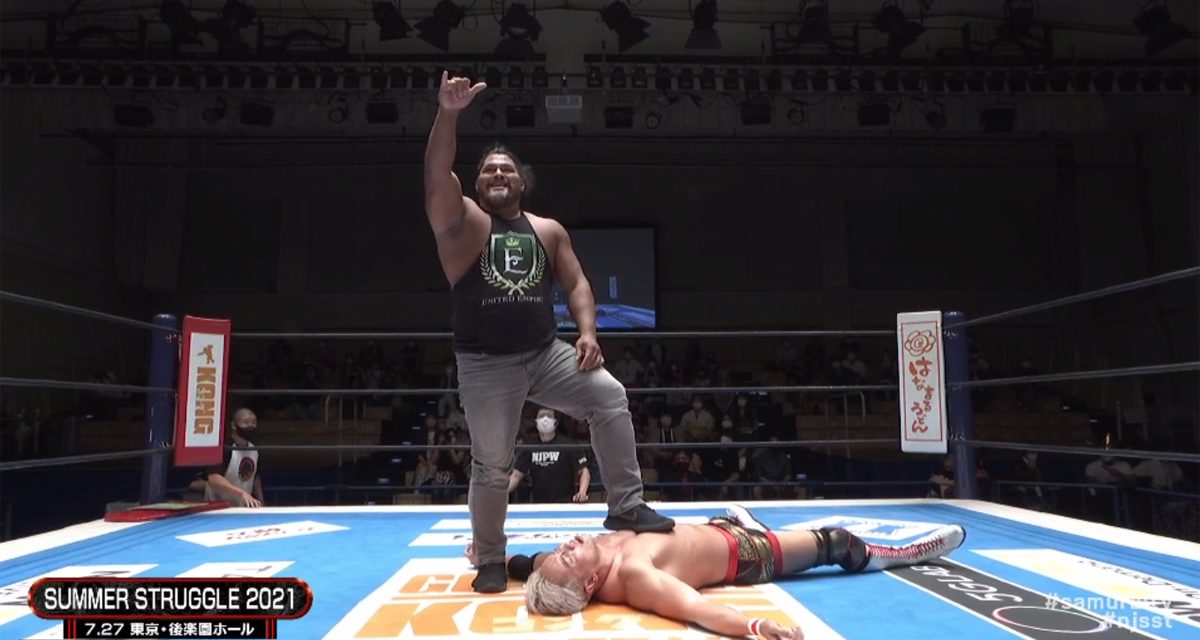 The feud between Jeff Cobb and Kazuchika Okada raged on at Summer Struggle tonight. Driven by unadulterated hatred Cobb blindsided Okada in attempt to injure his back and put him on the shelf.

Okada was the last to leave the ring and head through the curtain to the backstage area after his team won their tag team match. Seconds later he came barreling through the curtain back in the arena. Cobb gave Okada a head butt and a punch to the face. Cobb picked up Okada, moved back so he could pick up a head of steam then ran with Okada smashing his back into the steel post and dumping him on the arena floor. Cobb rolled Okada into the ring. Holding his back and grimacing, Okada tried to get back to his feet. Cobb set up Okada for a Rainmaker Clothesline but gave him a Tour of the Islands instead rearranging his spine even more.

A smiling Cobb stood over Okada keeping Young Lions who wanted to come to Okada’s aid at bay. Finally when Cobb left they scraped Okada off the canvass and carried him to the back.

Kojima pins Tsuji with his Lariat.

This match goes far longer than you might expect. To his credit Uemura doesn’t submit to the Yes Lock but is pinned by Ishimori’s Bloody Cross.

While the official heads off Takahashi from bringing his cane into the ring, Gedo takes a swing at Okada with his brass knuckles. He misses. Owens attempts to interfere. Yano pulls him out of the ring. Tanahashi slingblades Takahashi. Okada drop kicks Gedo and makes him submit to the Money Clip. In a funny moment, Yano sprays his air sanitizer all over Gedo as he is rolled out of the ring.

Takagi picks up Dick Togo. Evil sneaks up punching Takagi in the “lower abdomen”. Togo makes Takagi watch as Evil pins Bushi with Everything is Evil. Evil mocks Takagi as he heads to the back.