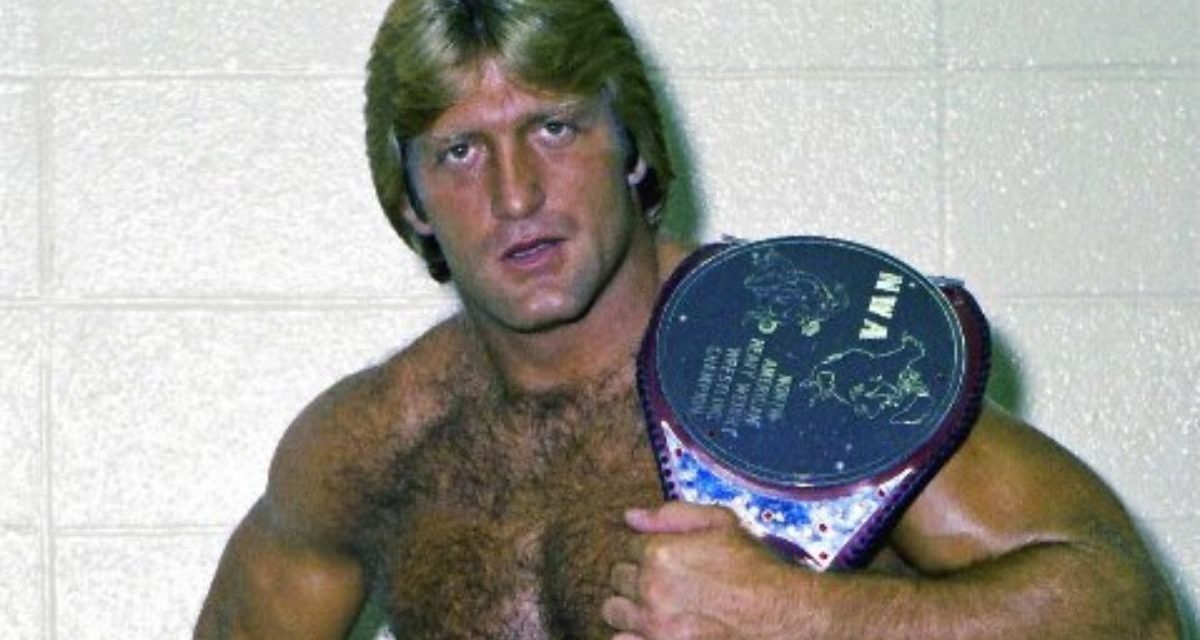 On July 12, Travis Orndorff, the son of “Mr. Wonderful” Paul Orndorff broke the news on Instagram that his father had died. He was 71.

“It is with great sadness that I announce the passing of my father, Paul Parlette Orndorff Jr. He is better known as ‘Mr. #1derful’ Paul Orndorff. Most of you will remember him for his physique. Many will remember his intensity. But if I could only get you to understand and see his heart. He will always be Pop, Paw Paw, and Daddy at home. And as much as many of you hated him as a wrestler, he absolutely loved you for it. He was an amazing father that showed me more love than I ever deserved. I love you Daddy,” wrote Travis.

Paul Orndorff had suffered from numerous issues in recent years, including throat cancer in 2011 and memory loss. He had just returned home from an assisted living facility.

In April 2016, Paul Orndorff was honored by the Cauliflower Alley Club, and he noted how much he cared about professional wrestling:

I think if the people only knew how much I loved what I did for a living. Wrestling. I loved it. I’m a very emotional person, and that’s how I operated. When I got into the ring, it was all emotion, buddy. And you’d better be ready to go, because we’re going now, because you people paid damn good money out there to watch me wrestle and to watch my partner wrestle. If he didn’t live up to what he was, he was going to get stomped on pretty bad, because they had just made him look bad, because I was that way.

Paul Orndorff got into the wrestling business, having watched Championship Wrestling from Florida in the mid-1970s after his football career hit a dead end. He called his father-in-law, who knew someone who knew Florida promoter Eddie Graham. During his first day of training, he went through round after round of Hindu squats before climbing in the ring for five minutes each with Bob Backlund, Bob Roop, and Jack Brisco. Then he got the privilege of a Hiro Matsuda front facelock. “I was so tired I was seeing stars,” he remembered. But he came back each day for six months, and the brutal training left enough of an impression that he’d use the same techniques as a WCW trainer 20 years later.

“Mr. Wonderful” will forever be linked with the early days of Hulkamania, as he was one of Hulk Hogan’s foes at the first WrestleMania, and a top challenger to the Hulkster’s world title in the mid-1980s. “In my opinion, Paul’s the greatest wrestling heel that there ever was. He could get real heat, not cheap heat, but the kind of heat where people wanted to kill him,” said Brian Blair, a long-time friend and opponent. As Orndorff put it in The Pro Wrestling Hall of Fame: The Heels: “I liked being a heel. It came natural to me and that’s when I started making my money … Rough and aggressive, aggressive, aggressive,” he said. “Same thing when I played football. One thing I loved to do was block.”

“The Brandon Bull” overcame a childhood in a tough part of Hillsborough County, Fla., to become a football star in high school and at the University of Tampa, where he totaled 2,254 career yards and 21 touchdowns rushing and receiving. He scored twice in the team’s 1972 Tangerine Bowl win, but the New Orleans Saints waived him in July 1973 after drafting him in the 12th round. Orndorff estimated it took him three or four years before he felt truly comfortable in the ring, but it look a lot less time for him to square things with Matsuda. After a few months of learning the ropes, he invited his father-in-law to a training session. “I got Hiro back and I mauled his ass. That’s the way I was … I wanted it so bad and I wasn’t going to be denied.”

After breaking in around Florida, Orndorff was mostly in Bill Watts’ Mid-South territory for about five years, with three runs as North American champion. “His work was excellent, he always stayed in very good shape, he was kind of a macho-looking guy, and he legitimately is a tough guy,” said Roop, who was with him in Mid-South. “He knocked out Van Vader and two or three other people … He actually was better as a good guy. He was good either way; he was very good in both ways, but better in my mind as a babyface.” Super-intense and never shy about speaking his mind, Orndorff had a dispute with Watts about whether he’d lose to Junkyard Dog, and split in 1982. Despite the differences, Watts thinks highly of him. “Paul Orndorff was upset with me all the time, but he never did not do his absolute best in the ring,” he said. “Paul realized later, he’s one of the ones that called me back later and said, ‘I didn’t realize what you were teaching me. I thank you so much.’ I still respect Paul completely and tremendously. He was a great athlete.”

In late 1978, Terry Orndorff followed his brother Paul, four years his senior, into pro wrestling. “It was a brother thing,” said Terry Orndorff. “I wanted to get in it. Dick Slater let me break in, he gave me my first break.” The younger Orndorff was basically schooled on the fly.

Paul Orndorff also had a front office run-in in Georgia in 1982, and where he got a push as a popular National title champ. “I really liked him. He was a pretty fair talent and he was a good athlete. Everything about him was good,” said booker Ole Anderson. But Orndorff skipped a card in Augusta because of an injury, and Anderson, a world-class talent at making a point, retaliated by tossing him out of the Omni in Atlanta. “Well, of course, he was pissed at me. He had a decent job. He was making some pretty good money, and he knew we were going to do everything we could to make him make even more money. And I just fired him.” Incredibly, Anderson encountered Orndorff and Rick Rude, then with WCW, years later when they were motoring a boat on a lake near Anderson’s house. “Paul said to me — again, I don’t know if I got it, but I’m close — he said, ‘You know what? I sure as hell wish you were back booking, in charge of this,’ ” Anderson said. “And to me, that was one of the nicest compliments that I ever received because, here was a guy who was so totally pissed at me.”

Orndorff flipped between hero and heel a couple of times in the WWF. Entering the company as a bad guy in late 1983 after working in the Central States promotion, he teamed with Roddy Piper, wrestling with him at WrestleMania I against Hogan and Mr. T. He said he changed his style when he got to New York and saw a company full of slow-moving plodders. “I wanted to be different than any other heel that was there,” he said. “I took a little bit from everyone I saw and I could just go, go, go … I never got tired. I was aggressive. They’d never seen a heel like that.”

Blair, part of the excellent Killer Bees tag team, thought Orndorff was absolutely convincing as a heel. “Paul couldn’t really talk like Ric Flair, didn’t have that gimmick, but he didn’t need one. He was just that good. People believed what he did.” Case in point — during a match with Blair, a fan in Boston hurled a small bottle of alcohol in the ring at Orndorff, splitting his mouth open. “He got up and he just beat the living daylights out of me,” Blair remembered with a laugh. “I said, ‘Paul, please, man, I didn’t throw the bottle!’ ”

The Hogan-Orndorff feud became the top draw in wrestling in 1986 — it drew more than 60,000 to an outside show in Toronto, and headlined sell-out houses in Nassau, N.Y., and Chicago on the same night, August 30, as a waiting plane shuttled Hogan, Orndorff, and Bobby Heenan, his manager, from arena to arena. “There are very few guys like Orndorff … that are really athletes, that really can do what I like to do in that ring, which is have a great match,” Heenan said. “Him and I worked together, we’d talk to each other, and then he goes and does something and comes back to me. Very few guys that worked were as good as Paul Orndorff.”

Hogan and Orndorff continued to battle until Orndorff switched allegiances once again, canning Heenan in favor of Sir Oliver Humperdink. But a severe arm injury essentially sent him into retirement at the end of 1987. He took a bad shot and his powerful right biceps started to shrink noticeably, a tough blow for someone who prided himself on conditioning. “My whole right side, I couldn’t pick up a glass of iced tea,” he said. “I started a bowling alley, had two of them, then sold them.” He returned to the national scene in 1990 with WCW, and worked there for most of the next five years before becoming a trainer at the Power Plant school.

At the CAC in 2016, Orndorff mentioned other broken parts: “I broke my neck broke three times, actually four times. After that fourth time, the doctor said, ‘Paul, if you do it any more, two things are going to happen. You’re going to end up in a wheelchair or you’re going to be six feet under.’ I quit then, when he told me that, so I had to quit. I’ve got nuts and bolts and rods and everything else in my neck and I don’t even hurt no more. I still work out.” 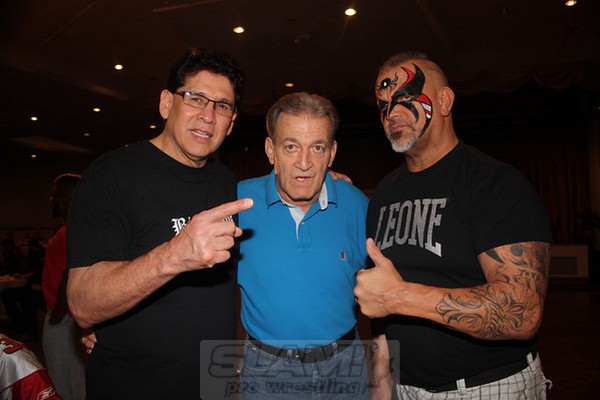 A member of the 2009 Professional Wrestling Hall of Fame, the WWE Hall of Fame Class of 2005, a 2016 Cauliflower Alley Club Men’s Honoree, and a 2017 inductee into the Tragos/Thesz Hall of Fame, Orndorff retired to Georgia, and made appearances at independent shows and fan fests for years.

His health took a serious turn for the worse in 2011, with throat cancer. He did the chemo and radiation, but it did not look good. At one point, he was in critical condition and on a feeding tube with days to live. But like a good in-ring comeback, Orndorff rallied. Cancer ran in the family, as his father died from it in 1965.

Travis Orndorff has set up a GoFundMe  to help the family with expenses.