Brian Blair busy as a bee

Brian Blair has so much on the go, it is dizzying. Between the politics, the start-up businesses, the volunteering and family, he’s always a man on the go. But in mid-April, he made time to visit some old friends at the Cauliflower Alley Club reunion.

On the Monday night, at an informal gathering, he shared a wild tale of traveling with Dusty Rhodes and Andre the Giant and a cooler full of urine that spilled that, well, maybe shouldn’t be re-told in its entirety here.

“Just about every top guy, I’ve been around and have stories with, and shared time with,” Blair told SLAM! Wrestling, teasing that he has started to work on his memoirs, detailing his career which began in 1977. 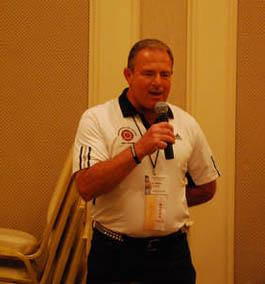 The rest of the time in Las Vegas at the Gold Coast Hotel & Casino, Blair was buzzing around, like he was a Killer Bee again, chatting with those he knew well, and those he didn’t too.

“Jack Brisco, God bless him, he was like a brother to me, but he always used to say, ‘B. Blair, you’re a total, natural babyface.’ I really can’t see being a heel,” confessed Blair. “Even in Japan, when I’d go over for New Japan, they’d put me with the gaijins, Americans, so to speak — we were called a lot of different things. But after a while, they started tagging me up with the Japanese, which I liked, because it was always harder wrestling with the Japanese because I’ve always just been kind of a natural babyface. It comes from my heart. I’m sincere. When you’re sincere about something, it’s easy to portray.”

While the 54-year-old Blair was hardly the first pro wrestler to transition to politics, he has shown a remarkable desire to keep fighting, to try again and again when things don’t go his way.

In Florida, Brian was elected Hillsborough County Commissioner, District 6, in 2004, after having run unsuccessfully before that. Blair’s family moved from Gary, Indiana to the Tampa Bay area when he was in the 5th Grade. After his four-year term was up, he turned his attention to state politics, attempting to become the representative for District 47 in 2010.

“I fell short there by a thousand votes, in a five-man race, to the senator’s son, and learned what politics is really about, and how powerful Tallahassee is,” Blair explained. 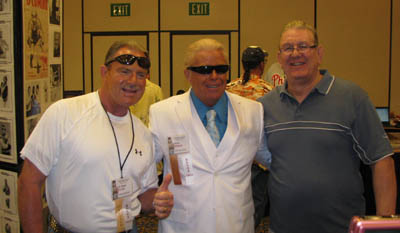 An old colleague, Bugsy McGraw (Michael Davis), was at his first CAC, and spoke highly of Blair, who lives nearby. “Even though he’s in politics, he’s an honest man, and I trust this man as a Christian,” said McGraw.

Until the chance comes up again to go back to local government, Blair is keeping his agenda packed.

Besides the business consulting, speaking at schools, and coaching youth baseball, Blair is involved with Fast & Furious Energy Shots, which are promoted as “delicious, power packed 2oz energy shots that deliver an immediate, lasting energy boost.”

Having just put up with another annoying federal election here in Canada, Greg Oliver is pretty sick of politicians. But hey, that Brian Blair guy is okay. Greg can be emailed at goliver845@gmail.com.