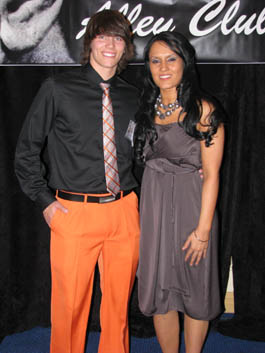 Melissa Anderson has been out of the TNA spotlight for more than a year now, but that doesn’t mean that she hasn’t been busy. In fact, she might be among the most-traveled female indy workers out there, having fought across the continent over the past year, and a return trip to Japan pending.

And with 10 years under her belt, she is one of the veterans out on the circuit, able to share her life lessons on everything from growing up a second-generation wrestler to how to best perform when the camera lights are on.

“It’s funny, I never thought I would see this point where I need to be careful, and work around old injuries that give me trouble every now and then,” Anderson told SLAM! Wrestling at April’s Cauliflower Alley Club reunion in Las Vegas. “We’re not supermen or wonder women any more, like we thought we were. We try though.”

She is as passionate about women’s wrestling as anyone in the business.

“Life’s really good right now. I’ve got a lot of projects on hand. One of them is Female Fight League,” she explained. “That’s helping support female wrestling, girls who want to get a website, get more marketing, get more media out there. It’s very, very hard to make a name for yourself as a female in the independent world. And I understand that. I’ve been doing this for a long time.”

In locker rooms everywhere from Montreal to Texas, she is asked for advice from the other women wrestlers.

“I spread the word. I tell them to get in touch with the Female Fight League. ‘What are you doing to market yourself?’ I just pump up Female Fight League because it’s a good, I wish I had that on the independent scene when I first started. It was so hard just trying to get my name out there. Just to be able to have one network out there, SHIMMER, Femmes Fatales, Pro Wrestling Eve, ChickFight, all these female wrestling companies that are a part of it. For us, as an independent female wrestler, that’s the high-profile shows that we want to be on, and help get our name out there, and bring awareness to female wrestling.”

In TNA, Anderson was pretty high profile herself, first as Raisha Saeed, the manager to Awesome Kong (now Kharma in WWE), and then as Alissa Flash. Promoters have the choice of any of her characters, including the longest running — Cheerleader Melissa. 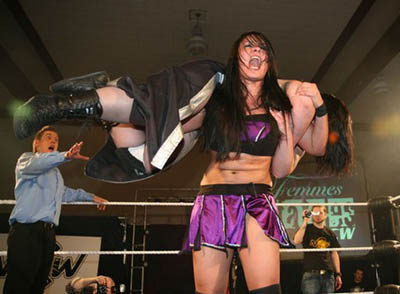 Cheerleader Melissa roars with Kalamity on her shoulders at the NCW Femmes Fatales show in Montreal in February 2010. Photo by Mathieu Sage.

Besides the friends in the locker room, there are other parts of TNA that Anderson admitted to missing.

“On the independent level, I love the freedom, I love the traveling, being able to do things on my own. I enjoy the longer matches, I enjoy being more creative in the ring without any stress,” she said. “At the same time, I do miss the TV style, I do miss the challenges that came along with it — and there were a lot of challenges, when it came to traveling, the schedule, and the TV schedule, your time slots, being able to meet those, and deliver what the company wants out of you.”

The lessons of working with the cameras filming is something she shares as well.

“When I wrestle on the independents, I pay attention, I’ve definitely changed my style a lot to make sure it caters towards, if they’re going to be filming it for DVD, now I’m more camera-aware when I’m performing in the ring as well, making sure my work looks clean and fantastic for the audience, but making sure it looks clean and fantastic for the cameras as well, and delivering them a good product as well,” she said. “It’s definitely teachable, but I also think it’s one of those things where you’ll never fully understand it until you are thrown in the fire. You can only tell someone so much of something, and I’m sure they can understand it to a point, but once they’re thrown in, they’re like, snap, okay, now I get it.”

The upcoming trip to Japan and the two TV tapings in Mexico for AAA bring Anderson into her past. She spent four months in the dojo of the Japanese women’s promotion ARSION in 2002, and in Mexico ran into some old friends — the Apaches in AAA. “I used to wrestle them when I lived in Japan in 2002. Their style hasn’t changed one bit. They wrestled exactly the same, with every single bit of aggression, everything I expected, and it was just like the good old days.” A proud supporter of the Cauliflower Alley Club, the pseudo-alumni association for the professional wrestling industry, Anderson enjoys hanging out with the stars from the past and the current talent on hand as well. A past recipient of the CAC’s Future Legend Award, she can always be counted on to bend elbows to get raffle tickets sold for the CAC’s benevolent fund.

With so many books by the oldtimers out there, including a new one by her “uncle” Billy Anderson, who tag teamed with her father Doug Anderson for so many years, is there a book in her future?

“My book is not finished being written yet, at all, not even close. I’ll say it’s maybe halfway,” she said with a laugh.

At a table at this year’s Cauliflower Alley Club banquet with the likes of Greg Oliver, Bugsy McGraw, Rick Martel, Dan Kroffat, Nick Bockwinkel, Buddy Lane, and George Napolitano, Melissa Anderson sure stood out as a rose among thorns.