“Cowboy” Johnny Mantell’s inaugural Germanfest Wringenmiesterschaft Tournament, held April 29-May 1, 2011, in Muenster, Texas, was easily the most ambitious indy show produced over the last few years, and included the crowning of a Indy World Champion in Tim Storm. No wonder it took Mantell a few days to get around to talking to media outlets about how it all went down.

Decompressing on his ranch, Mantell recalled how surprised Harley Race, one of the judges, was when he learned that it was really just Johnny and his wife “K” doing most of the work. Every night of the tournament, Mantell would be up into the wee hours, organizing things, or fretting about the iffy weather, rather than hanging with his old friends he brought in to judge the indy stars. 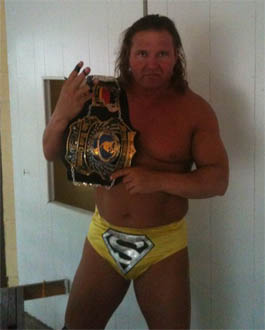 Looking back at things, with the 44 competitors from 17 different states, and close to 5,000 people watching the matches at various points, Mantell is understandably proud — and tired.

“I’m awful proud of the product that we did. I’m proud of the boys that came in and gave this tournament an opportunity,” Mantell told SLAM! Wrestling. “It was a hard thing for me to sell to people. The business has gotten very fickle, and the kids that are in it today are a little different than when I came through this business. It was hard to explain to them how this was going to work.”

So how did the GWT work?

Entrants paid a fee, and were placed into a tournament. For the round robin first round, the wrestlers could only work with people they didn’t know. Judges, including legends like Race, Killer Karl Kox, Buck Robley, and Chavo and Mando Guerrero, judged each match out of 10, and the most a wrestler could get was 50 in a match. Points didn’t accumulate; rather it was highest points in a particular match that mattered when seedings were determined for the second round. The top 32 wrestlers then started a single elimination tournament, based on their match rating — not wins and losses.

Muenster’s Germanfest Wringenmiesterschaft had an admission fee, but once people were in, the wrestling — and other shows — were free. The Chamber of Commerce that organizes the festival has already invited Mantell back, perhaps with a different location in the park.

In the end, it came down to a Sunday night championship match between Tokyo Monster Kahagas, with manager Rico Casanova, of Sebring, Florida, and Tim Storm of Bedford, TX. It was Storm’s eighth match in three days, and Kahagas’ seventh.

“I think the right guy won,” said Kox. “There were so many guys there that didn’t know the ins and outs. This guy that won, he’d been around a little bit, and he knew what the hell he was doing.”

Indeed, the two finalists were veterans themselves compared to a lot of the youngsters, with Kahagas in his 14th year in the business, and Storm — an 8th Grade science teacher during the week — in his 17th.

“This business is so full of young guys now. It’s hard for someone like me, I actually got a later start than most of these guys. To be in it, to work as hard as we did, I think experience did pay off,” said Kahagas. “As far as a lot of the young guys in it that they were talking about that they can dismiss quickly, that’s true, but you have to give the guys credit for where it’s at. They came out and did the best they could.” 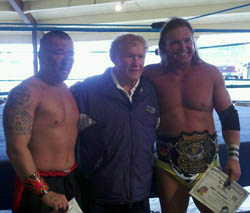 Casanova, Kahagas’s manager for the last few years, praised the event and the organizers, especially for persevering through cold and rain on Sunday. But he spoke up for his charge in an email.

“In my honest and humble opinion, I don’t think the right person won. Tim Storm did a great job and worked hard. However, if you want to talk about consistency and overall performance, I would say that Tokyo Monster Kahagas should have been the winner. What’s my reasoning? Well that’s simple, Kahagas swept all the three rounds of the round robin with the highest score,” explained Casanova. “He did not have a bad match and all the guys he worked in the tournament have said that it was their best match. What’s the common denominator? Working Kahagas. They said it was actually a tie and they went to a tie breaker.”

Mantell had only met Storm once before the tournament, despite their common Texas roots. “He is really quite a hand in the ring. To me, he wrestled better on Sunday than the four, five times that I’d seen him previously wrestle,” said Mantell. “We have to attribute it to the fact that Mando Guerrero spent so much time in the dressing room with these guys, helping them with their matches, giving them finishes, correcting some of their wannabe highspots into what they needed to be.” 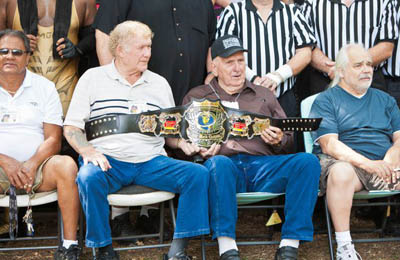 Other names from the past that were in attendance, in full or in part, included Iceman King Parsons, Chris Youngblood, Stan Hansen, Jake Roberts, and referee James Beard.

Robley came away impressed, and with some hope. “You got the chance to look at some independents out there, and it tells me that there’s some talent out there. They just don’t have the ring psychology, because they don’t know; nobody’s ever taken the time to teach them that. Overall, it was a good show.”

Mantell explained a little about the behind-the-scenes booking.

“Everything that we told the guys was, ‘We want this weekend believable, we want the matches to be real, I don’t want you to kill each other, but I want them to be real, and bring it back to the style of the ’80s.’ The kids really did it. It was really a proud moment for me and we look forward to the next one,” he said. “The whole concept to this thing was to help the young guys of today, and push them in the right direction, try to give them a real experience in the wrestling business.” 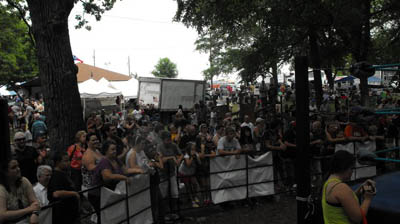 A shot of the crowd at the Germanfest Wringenmiesterschaft Tournament.

Everyone came away with some new contacts and experience.

Besides each other’s names and numbers, the competitors performed in front of the general manager of Japan’s ProWrestling NOAH, Ryu Nakada. As well, others, such as Casanova, who organizes tours of Central America countries like Panama, took down info.

For the next year, Storm will be recognized as the Indy World Champion. He initially tried to give the belt back, content with the other prizes lined up by Mantell, like custom-fit jeans every month for a year, and a trip to the Pro Wrestling Hall of Fame induction ceremony next weekend in Amsterdam, NY.

“We’re going to make this title mean something, because I think it needs to mean something in the business today,” said Mantell. “When he walks into a building, whomever it may be for, his belt will outshine anything anyone else has.”

Already, Mantell is planning for 2012, the last weekend of April.

He’s hoping for more sponsors, for one thing.

“I think it will just grow from here. I think it’ll really become something that will be attractive to everybody in the business to get an opportunity.”