Waltman wary of promoters, but still loves to perform

At this stage in his career, Sean Waltman (1-2-3 Kid, X-Pac, Sixx) has a pretty decent idea of the type of independent wrestling promoter he wants to work for.

One of them is most definitely Nick “Nitro” Wyman, who has an incredibly ambitious show on Saturday at the Brantford Civic Centre, home of so many WWF TV tapings in the ’80s. 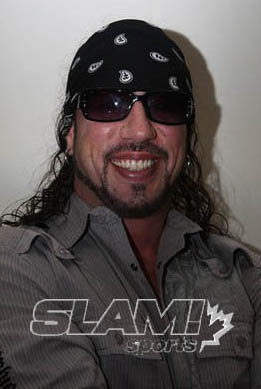 Sean Waltman at a fan fest in late 2010. Photo by Christine Coons

Waltman is returning to Wyman’s CWI promotion without hesitation — and is bringing some friends along.

“That’s one of the promotions that I speak highly of to my friends. That’s why there are guys like Nash that are going to be on the show now. Hogan is going to be a part of the show. It’s just every now and again you run across a really good one, like CWI, that has their sh*t together, so to speak,” said Waltman.

It’s a stacked show for Brawl at the Bush 2, with, yes, the Immortal Hulk Hogan headlining his first Brantford show in over 20 years. Other big names include Scott Steiner, Kevin Nash, Tatanka, Ted Dibiase and Virgil, Steve Corino, Bushwacker Luke, Jushin Credible, the Nasty Boys, the Highlanders, and Brutus Beefcake. Plus, some of the top Ontario indy talent such as ROH star Michael Elgin, the Flatliners and Jamie D will be on the card. And, since the Hulkster is there, his daughter Brooke Hogan will also be performing at the show and at an after party.

The 38-year-old Waltman, who debuted in 1992, has earned the right to be selective about who he works for.

“I have to be. There’s a lot of promoters out there,” he said. “For the most part, that’s a good thing, but you never know the level of talent that you run into from one promotion to the next. You get there and you find out you’re in a match with a guy, and they tell you he’s a good worker, but, really that’s their judgment. I get in the ring with the guy and I find out different. A lot of times it costs me injury-wise.”

But it’s not just about the in-ring action either, he said.

“And then you have the promoters that are really parasites on the wrestling business, I call them. They cheat the boys, they don’t do a good job promoting, they never have a decent crowd, they have guys on their shows that are out there in tennis shoes and cut-off jean shorts. Even though they pay the money, it’s almost not worth it, it really isn’t sometimes. There’s a lot of great independent promoters out there too — it’s just finding out which ones they are is not always easy.”

When there’s an issue with a promoter — and Waltman insists that the little things don’t bother him, but mistreatment of fans or talent is unacceptable — word can travel far faster and with more impact than ever before.

“I think about that now. In a lot of ways, it’s tougher to be successful in wrestling today, to learn and come up the right way in wrestling these days,” Waltman considered. “But as far as getting the word out about yourself, if you have talent, it’s incredible, the Twitter, Facebook, the social media, all those things. And just the Internet in general, it’s amazing how fast news spreads.”

Waltman looks forward to meeting fans at events as much as the wrestling — and there will be plenty of opportunities this weekend with the various VIP packages and other events planned by CWI.

But it’s not an easy job either, he stressed.

“I’m not going to lie to you, after three hours of doing a meet and greet, physically I’m tired — because I stand. When I do my appearances, I don’t sit at a chair and have my eyes staring at the table, not making eye contact with the people. I stand up the whole time, whether it’s two, three, or however many hours it is. I don’t sit behind the table,” Waltman said. “I interact with the people, I stand with them, and I talk with them, we have conversations. It takes a little bit longer to do it that way. I enjoy it, and the people enjoy it. If you can make somebody happy by doing something so simple as signing your name and taking a picture with somebody, my God, that’s a hell of a blessing to have, and I’m not going to squander it.”

During the week, Waltman has started working in radio and has TV webcast on Cowheadtv.com.

“That’s a whole different thing that I’m branching off into now as my body is starting to break down more,” he conceded.

Friday May 13th: A free event at the Ohsweken Speedway with many of the stars.