I know it was Mother’s Day that just passed, but I feel compelled to share with you just how I feel like a proud father a lot of the time with my staff at SLAM! Wrestling.

See, while I might get a lot of recognition for it being my website, the fact is that it isn’t. We really are a team here, and I’m Mr. Brady, looking after a slightly-dysfunctional collection of writers, photographers, and one illustrator, who happens to be the senior member of our bunch (our Alice?).

A great example was this past Sunday, when I got to head to the Canadian Sports Card & Collectibles show out by the Toronto airport, where Jon Waldman and Stephen Laroche were pushing their new book, Got ‘Em, Got ‘Em, Need ‘Em: A Fan’s Guide to Collecting the Top 100 Sports Cards of All Time. 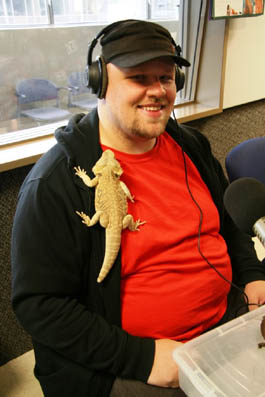 Jason Clevett with Tobias the dragon live on a Calgary radio show in the fall of 2010.

Though it’s not a wrestling book, I know that I’m a part of it, and I take great pride in the accomplishments of two of my own.

“Nuke” Laroche used to be a subscriber of mine to the Canadian Wrestling Report (back issues available!), and then I got him into Canoe.ca as an online editor. He got thrown overboard when I did too, December 2001, conveniently just before Christmas. We hung out here and there, particularly dealing with a common love of hockey cards.

As for Mr. Waldman, well, though I didn’t bring him onboard the good ship Canoe, we worked there at the same time, and his desire to contribute on the wrestling site brought him into my sphere of influence. 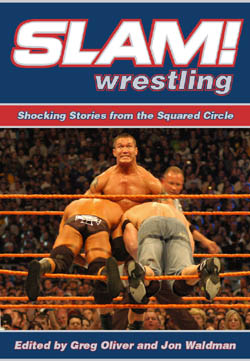 After he left Canoe, Jon still wrote for SLAM! Wrestling and is essentially my second-in-command in fact if not title. When I needed someone to shepherd the SLAM! Wrestling: Shocking Stories from the Squared Circle book into the world, he was a logical choice, doing much of the legwork while I was sort of the bigger picture guy. In the publishing world, being already published and having a track record means a lot, so my name, and the four previous books, combined with SLAM! Wrestling, got it to the bookshelves.

What Jon did was impress the folks at ECW Press enough with his work and hustle on it that his pitch for the trading card book worked.

So in my little way, I helped get the book out there, like I was the grandfather or something. 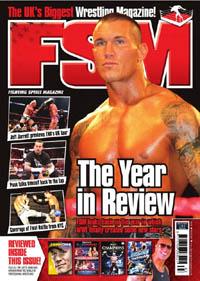 With Brian Elliott, now the editor of Fighting Spirit Magazine in the United Kingdom, there’s a similar feeling. Brian was one of my hardest-working contributors, continually tossing creative, well-written stories my way, and adding his own touch with unassigned editorial columns too. I offered advice where I could as he went through ups and downs with “real” employment.

Our loss at SLAM! Wrestling is of benefit to the world of pro wrestling journalism, since the mag is probably one of the top, if not the top, wrestling magazine out there.

I can go on in other ways that my staff has made me feel like a proud papa, and sometimes that is quite literal, with the various children that have entered our lives as we grew from young adults who loved to write, and were enthralled with professional wrestling, into the respectable members of our community that we are today.

Jason Clevett in Calgary doesn’t contribute as much as I want, and is continually more ambitious than he should be, but unlike when his time challenges were from a soul-sucking job with a major Canadian telecommunications company, he now has a thriving business as a reptile guy, taking his creeping crawly thingys to schools and birthday parties. Check out Calgary Reptile Parties. 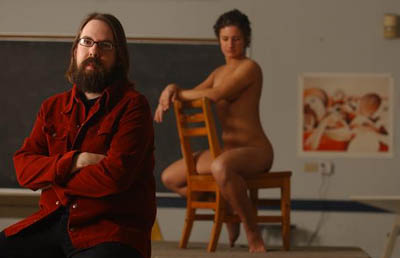 Marshall Ward and one of his subjects.

Last year, I got to go to an art show of Marshall Ward’s in Waterloo, Life: An Exhibition of New Works on Paper. That led, in part, to SLAM! Wrestling poaching Colin Hunter from Pro Wrestling Illustrated for some projects. With both having been established in journalism before landing aboard our humble website, it’s a real nice feeling.

I’ve seen others contribute during their university days (or before in the case of the Sokols), or just afterward, only to move on to “real” jobs. Sometimes they stay involved, sometimes they don’t. It is also meaningful to get job offers in return from colleagues who have moved on; while I want those to continue, I can also state that I love being a stay-at-home dad/writer, and while it may be the worst paying job that I’ve ever had, it is by far the most rewarding.

With the exception of one who felt that his days at SLAM! Wrestling were a negative on his resume and asked for his byline to be removed, most contributors have kept in touch here and there. (In that case, by the way, I refused, though any directly identifying information, like an email address or the personal footer was removed; it was like your kid saying that he didn’t love you — and never did — if I’m being honest here.)

The common bond through all of these years at SLAM! Wrestling, which started in 1996, has been me, minus a little hiatus in 2002 to early 2003, when I got my first book written.

So aside from wondering whatever happened to Eric Benner, our columnist from 1998 until 2002, I have to say that I am proud papa and that is a large part of the reason that I do what I do — assigning, editing and posting stories, arranging for media credentials, ironing out conflicts, factchecking, organizing, dealing with the promotions, the Sun papers, and our host/parent Canoe.ca.

I look forward to more from my staff, and I hope you do too.