Variety of intense action delivered at ROH in Toronto

Hundreds of screaming Toronto wrestling fans will always make sure to let everyone know when Ring of Honor is in town. These fans love their wrestling, and would not settle for anything less.

“The crowd in the Ted Reeve Arena is just insane,” said hometown boy Michael Elgin. “There’s just nothing like it. I think they’re even on par with New York City. They’re live and they’re with it.”

Ring of Honor certainly puts the “sport” back into “sports entertainment.” These shows are always action-packed and they have yet to disappoint. Saturday’s show at the Ted Reeve Arena was no exception. 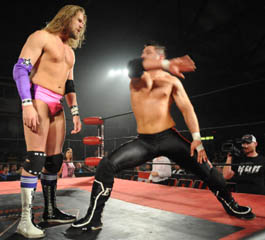 “With Ring of Honor, there are so many good matches, but you want to top everything,” Elgin said. “All six of us really did what we can do, and hopefully the Toronto crowd appreciated it, and will talk about it from here on in.”

There were also a series of rematches on the card. But despite the fact that sequels tend to pale in comparison to the original, the fans were still at the edge of their seats, which may be proof that some good things come in pairs.

Wrestling’s Greatest Tag Team may have put to rest their feud with the Briscoes, while the blood continues to reach its boiling point between Steve Corino and Mike Bennett. And then of course, Davey Richards and Kenny King brought some life to the party with their encounter. There were chants for both men, chants of “Ring of Honor,” chants of “this is wrestling,” and other chants which cannot be repeated.

The man known as “The Fallen Angel,” may have an appropriate nickname, because Christopher Daniels might as well have fallen from heaven and landed in the ring. And as he came out for his match with El Generico, he seemed pleased to be surrounded by a room full of people who love wrestling just as much as he does. Some may even love it more, if that’s even possible.

“Canadian fans are great,” Daniels said. “It’s always fun to come out here and perform in front of them.”

Daniels may actually be the busiest man in wrestling today. And how could he not be? He does work for two companies. But his passion is what drives him, and he always makes sure to give his fans what they want; more of him.

“The thing that the two companies (ROH and TNA) have in common is that everyone is real positive in the locker room,” Daniels said. “The talent in both locker rooms is phenomenal. I enjoy both companies. I’m thrilled to be in a place that my friends are. I have lots of friends in this locker room (ROH). These are people I enjoy working with. Right now is a good time to be me. I’m very lucky to be able to participate with both companies, and I hope to keep that going for a while. I feel like every day that I’m off, is a day that I could have been wrestling somewhere.”

Daniels is also one of the oldest members of the ROH roster. But it’s often hard to tell just by watching him in the ring. He puts a sequence of moves together that most guys who are 20 years younger couldn’t do. His match with El Generico was top notch, and he displayed no signs of wear and tear.

“I’m just going to continue doing what I do best, and that’s wrestle,” Daniels said. “I’ve sort of been rejuvenated as a character here in Ring of Honor with Roderick Strong and Truth Martini, and it’s sort of a new direction for me. I think this is going to be something that the fans enjoy, or at least enjoy to hate.”

There was also no shortage of emotion for the Larry Sweeney tribute match, between two of Sweeney’s closest friends, Colt Cabana and Delirious. The match wasn’t very heavy on wrestling, but it was more focused on entertainment, which may have been what the late Sweeney would have wanted. Both guys put on incredible performances. They took turns tossing t-shirts into the crowd, with Larry Sweeney’s name echoing through the arena. There was also a dance-off, which even involved Senior Referee Todd Sinclair. The match was loads of fun if nothing else, and both guys had a tremendous outing, dedicated to the memory of their dear friend.

And what would an ROH show be without royalty? The Kings of Wrestling were certainly at their best, as they each participated in singles competition.

Claudio Castagnoli turned up the heat in this freezing cold arena, with quite the opening match, against another hometown hero, Kyle O’Reilly.

“When you’re a main guy, some of these young, up-and-comers are going to try to make a name for themselves off of you,” Castagnoli told SLAM! Wrestling before the show. “Kyle O’Reilly is in his home country, and all the fans might be behind him. I’m looking forward to the match, but I’m not ready to step down though.”

Despite O’Reilly having the home field advantage, Castagnoli was able to put him away. But it wasn’t easy. However, Castagnoli’s partner probably should have taken notes. Chris Hero ended the show against the current ROH World Champion Eddie Edwards, but was not able to dethrone him.

Even after the distraction by Shane Hagadorn and the Queen of Wrestling Sara Del Ray, who were earlier ejected from ringside, and then the outside interference by Castagnoli, Edwards was able to hurdle every obstacle and ended up forcing Hero into submission with a half Boston crab. But those who frequently place bets can be sure that this one is far from over.

Right now, it’s anyone’s guess when Ring of Honor will be returning to Toronto. But surely the Toronto ROH fans would rather have that date sooner than later.