It’s already being called “The Woodstock of Wrestling” — a three-day wrestling tournament that will feature 400 wrestlers wrestling close to 400 matches in front of an audience that could number in the thousands, while veterans of the pro wrestling world, such as Booker T, Stan Hansen and Terry Funk, judge and critique them. It’s a brand new concept, never before done in the history of wrestling, capturing the imagination of wrestlers and fans alike — and it’s still five months away.

The tournament — officially dubbed “The Germanfest Wringenmeisterschaft Tournament” — will take place in Muenster, Texas over the weekend of April 29-May 1, 2011 during that city’s Germanfest festival. The tournament is the brainchild of “Cowboy” Johnny Mantell, a near 35-year veteran of the wrestling business who has wrestled all over the world, including Japan and competed against legends such as Lou Thesz, Gene Kiniski, Antonio Inoki, Terry Funk, Roddy Piper, Shawn Michaels and the Guerrero Brothers, to name just a few. Now, mostly retired from wrestling, he conducts occasional training seminars and clinics at his ranch in Montague County, Texas and hosts his own online weekly wrestling radio show. Working with the new wrestlers coming into the business at these seminars and clinics, Mantell could feel something was missing, an integral ingredient in the wrestlers’ collective recipe books. He felt compelled to do something about that. 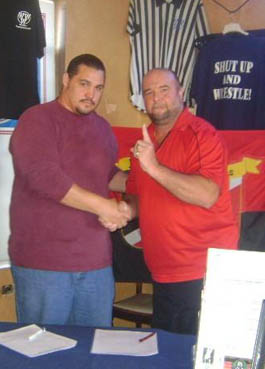 “I was lucky enough to be in this business at a time when you traveled the roads, spent time and learned from many of the greats in this business,” the Cowboy explained. “At that time, you spent so much time with these great men, you learned the skills and knowledge of professional wrestling that makes it the great business that it is — the moves, the psychology, the interaction. With the evolution of this business, the way the business is now, the wrestlers of today don’t get that opportunity.”

He recalled a story he heard from The Honky Tonk Man, who was recently a guest on his online radio show, Mantell’s Corral. HTM told him about a recent encounter he had with a young wrestler who proudly told the “Greatest Intercontinental Champion of All Time” that he had been wrestling for three years. When the wrestling legend asked the youngster how many matches he had wrestled in that time, the rookie sheepishly answered, “Fifteen.” Back in his day, The Honky Tonk Man wrestled that many matches in a week. Times, Mantell noted on the radio show, had clearly changed.

“One thing that was important to me was to be able to give back to this business and the many talented individuals that work today,” Mantell said in an interview. “This tournament will provide these wrestlers that camaraderie and knowledge like we used to get in the old days.”

Wrestlers have been invited to join the tournament from all over the world. Mantell is hoping to get wrestlers from Japan, Australia, Canada, Mexico and Europe so that all the participants can have a chance to experience different wrestling styles and techniques. “Where else,” he asked, “but at a tournament like this are some of these guys going to get a chance to wrestle people from Japan and other continents? It’s a real opportunity for them.”

What makes the Germanfest Wringenmeisterschaft Tournament even more unique is the way the tournament will be run. Unlike traditional wrestling tournaments where the results are predetermined and the winner is decided in advance, this tournament will be judged by veterans of the business based on certain criteria and wrestlers will earn points based on their performance.

Those criteria will be based on how well the wrestlers’ work their gimmick, how good their gear is and how well they pulled off their moves, to name just three. It’s a unique concept and one that suits participant Michael Faith just fine. Faith, who resides in Madill, Oklahoma, and has been wrestling for the past 11-1/2 years, weighs 375 pounds and stands 6-foot-2. He believes the way the tournament is set up puts on him on the same playing field as the smaller, sleeker athletes.

“It’s kind of like an American Idol for pro wrestling,” Faith said, laughing at his own ridiculous comparison. “It’s a chance to be judged on how you perform in the ring rather than who you know in the wrestling business or who has the tightest six-pack. These days, it’s hard to make it anywhere if you’re not ripped out like a bodybuilder, but this tournament keeps things even.”

To that end, the judges will not even know the names of the wrestlers competing. Each wrestler will have either a red or green ankle bracelet affixed to their boots, and the judges will identify the winners based on their ankle bracelet colour, eliminating any chance of favouritism. “So it’s not a popularity contest,” Faith said. “It’s a level-playing field. The person with the most points moves on. So I could ‘lose’ every match and still win the tournament.”

Faith was the first wrestler to sign up for the tournament — that’s how amped he was to participate. He’s worked with Mantell before after meeting him at an NWA Southwest show. Mantell told Faith about the tournament and Faith showed immediate interest. The two held a press conference not long after to officially announce the show and then the entry forms started piling in, so many that the deadline for registration might even have to be moved forward.

But it wasn’t just wrestlers who were interested in participating in the tournament, many veterans of the wrestling world signed on when they heard about it too, excited about the chance to judge and critique the upcoming talent. So far, Bob Orton Jr., The Honky Tonk Man, Stan Hansen, Booker T, Jerry Oates, Terry Funk, Les Thatcher, Killer Karl Kox, Chavo Guerrero Sr., Tim Brooks and Danny Hodge have all agreed to be judges and that list may grow. Different men, with different backgrounds, but all have a similar perspective on the tournament.

“I see this as such a unique opportunity,” the Honky Tonk Man told Mantell on his radio show. “And that’s why I jumped on this. We’re going to see different styles, different techniques from around the globe and they are all going to come together for this and we’re going to be able to see these young fellas and be able to give them critiques. And it will be good for them because the other judges aren’t going to judge the same way I judge and vice versa. I’m not gonna judge the same way Terry Funk or Stan Hansen will and that’s just how it’s gonna be. So it’s such a unique opportunity. There is really no other place to showcase your talents in this way than at this tournament.”

Part of what makes it unique is the person running it, Johnny Mantell himself. Mantell is well-respected and for good reason, as Faith attested. “The thing people most respect about Johnny is the way he treats the wrestling business and the way the treats the wrestlers,” Faith said. “He comes to you not as much as a veteran but more as one of the boys and he talks to you on a personal level, rather than just talking down to you. And I’m not saying there’s anything wrong with people who do talk down to you; I’m just saying that John is a real personal guy. Talking to him is more like talking with someone who trained with you. He’s great at giving critiques. I can tell you that I learned more from him in two hours than I did in 11-1/2 years of wrestling. He’s been teaching me moves I’ve never even seen before and ways to get out of holds I’d never seen. Those were the basics for him back in his day and they’ve been forgotten. So teaching me — and others — is his way of giving back.”

The tournament has been five years in the making and if it is a success, Mantell is considering doing something similar every year or possibly even for tag teams and women. But first things first: Mantell’s main priority is to make this first tournament a success. “We are planning to make this the best it can be for the wrestling participants, judges and volunteers for this event. We also want to be an exciting part of the 36th Annual Germanfest,” he said. “Then we’ll talk about the future.”

Wrestlers, judges and referees interested in participating in the tournament can get more information, including entry forms, at www.wildwrestling.webs.com. The entry deadline was originally posted as being March 1, 2011, but may be moved to an earlier time due to the “unbelievable” amount of interest. Mantell encouraged everyone that wants to participate to register as early as possible rather than miss out on a once-in-a-lifetime opportunity.

“I just want to have great conversations with many of the young, independent talent of today,” Mantell said when asked to explain his motivation for putting the tournament on the first place. “The true winner of this tournament is the entire pro wrestling industry, really. It’s an opportunity not just for the wrestlers to come out perform and have a potential job interview, but also for me to teach these guys the skills and knowledge that were taught to me. What could be more important?”