Consider this: The WWE Championship takes 30 pages to detail the company’s top title from 1963 to 1984, when there were nine champions, then the rest of the 316-page book to cover the remaining years and the ever-increasing number of title changes.

If that isn’t indicative of how the business has changed, I don’t know what is.

And, as good as the book might be — think Intercontinental championship level rather than World championship — I think it’s a huge slight to the champions who built the company. 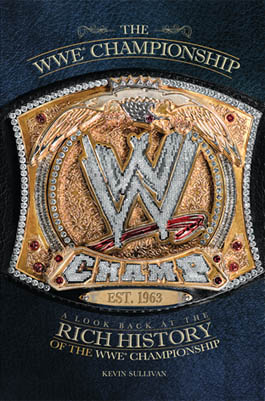 By never delving into the formula that worked especially for Bruno Sammartino and Pedro Morales — build up a challenger week after week, run an angle to set up the match, let the challenger go at the big man a few times until a blow-off match, then start it all over again — author Kevin Sullivan disrespects the very pillars of professional wrestling.

“When Bruno Sammartino won his first WWE Championship in 1963, the wrestling scene was far different than it is today,” writes Sullivan near the end of the book. “For the Italian strongman, keeping the title meant turning back the likes of Gene Kiniski, Killer Kowalski, and Giant Baba. While all were greats of their time, they hardly possessed the athleticism of today’s WWE Superstars.”

That sound you hear up in the sky is Kiniski grinding his teeth.

Today “holding the WWE Championship for an extended period of time is considerably harder than it was in Sammartino’s day, as evidenced by Edge’s victory at Survivor Series, which started a game of hot potato that is still being played today.”

Apparently the varied challengers of those years, from Gorilla Monsoon to Crusher Verdu to Waldo von Erich to Adrian Adonis or “Playboy” Buddy Rose, aren’t worth their salt because they never held the WWE Championship. The sellout crowds at Madison Square Garden might be mentioned, but never with any sort of understanding or explanation. The champion doesn’t draw the house — week after week, month after month — by himself; he needs a challenger that prompts his legions of fans to come to the arena and cry themselves hoarse in support of their hero. The skillfully built undercard enhances the show, and provides hints of future challengers.

But hey, Sullivan’s got a great handle on sports entertainment. As a 10-year employee of WWE, he got interviews with just about anyone with a connection to the company. But, as it is a WWE Books publication, he also has to stay to the company’s script — even if he may not be a full-time employee of the company any longer.Some examples: Buddy Rogers’ heart attack as an excuse to lose to Sammartino is never questioned (and he won the belt in Rio de Janeiro, of course!); Sammartino’s blackballing is addressed, but apparently Vince McMahon Sr. had nothing to do with it; WCW was a messed-up company that never did anything right; Mike Tyson had nothing to do with the drawing power of Wrestlemania XIV, where “Stone Cold” Steve Austin ascended to the apex of the business; documentaries like Beyond the Mat or Hitman Hart: Wrestling With Shadows never existed, let alone offer differing viewpoints from the company line.

Real hardcore fans want insight into the business itself — the politics that make things happen. Does correspondence from McMahon Sr. exist to and from his fellow promoters or wrestlers? Tax records? Health forms? Who owned what part of the company and when? Did all the partners get to vote on the champion? The word booker or scriptwriter never appears in the book, so we never get to hear from key behind-the-scenes figures like Vince McMahon Jr., Stephanie McMahon, Kevin Dunn, Pat Patterson, or George Scott.

And he obviously didn’t get to talk to every living world champion. Missing are the likes of Sammartino, Ivan Koloff, Morales, Superstar Billy Graham, Bob Backlund, Ultimate Warrior, Randy Savage, The Undertaker, Kurt Angle, The Rock — shall I go on? While Hulk Hogan’s autobiography is cited, as well as Eddie Guerrero’s, Sullivan does not reference the books or interviews done by the missing champs. (And, while he was World Champion, not WWE Champion, Chris Benoit is skillfully omitted as well.)

Belt marks will be disappointed as well. There aren’t close-ups of the titles during the years, nor are there details on which craftsman made the hardware.Alright, enough ranting from the old guy.

The WWE Championship is a good book, well-written, entertaining and it moves along smoothly. There are plenty of surprises — like the acknowledgment that Backlund and Antonio Inoki switched the WWWF title in Japan, or Sgt. Slaughter really detailing the threats on his life during his run as champion while an Iraqi sympathizer. Ric Flair taking former WCW honcho Jim Herd to task could have taken up another four pages, it was so entertaining.

Sullivan tries his best to tap dance through delicate issues, like Rob Van Dam’s drug bust that apparently caused him to lose the WWE and ECW World titles, or divorces and other personal issues that distracted from in-ring performances. But he’s not consistent with backstories either, offering them for some superstars but not others.

There are some great photos from the WWE archives — alas, all in black and white — that really enhance the prose.

In summation, if you are a fan of everything post-Hulkamania, then Sullivan has done a fine job recounting the history of the WWE title. If your memories were etched at an earlier stage, avoid The WWE Championship like the plague.