Chances are that if that drunk driver hadn’t hit his car, then a lot more people would have heard of Terry Orndorff, the younger brother of “Mr. Wonderful” Paul Orndorff. 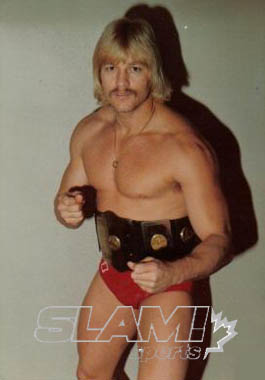 “I’ve been all over the place. I wrestled in pretty much all the territories. I also carried a few belts, and I was at a few SuperDomes. But I never hung in there. I got into a bad accident and that did it,” Orndorff told SLAM! Wrestling recently from his home in Florida.

He tried to return. “I just couldn’t get it back, I couldn’t do it,”

There is a happy ending, however. Orndorff was a union boilermaker, and kept his union dues up all throughout his short wrestling career.

“When the wrestling wasn’t real good, I just stayed around the house here, working the unions, for $20, $25 an hour. Believe it or not, I got 30 years with them, and I’m drawing a pension off them,” Orndorff confirmed.

Having recently celebrated his 58th birthday on October 7th, Orndorff was reflective about his career in an interview, still in recovery from having five discs taken out of his neck in July 2010.

“I’m not going to blame pro wrestling, but it probably had a little bit to do with it,” said Orndorff, his voice a little more hoarse than it used to be — “that’s why I sound like a frog a little bit.” 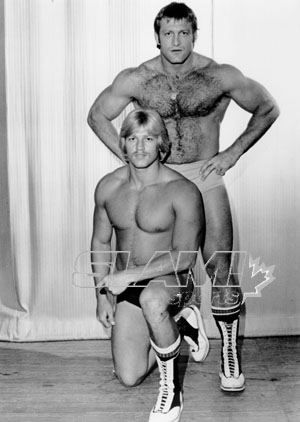 “It was a brother thing,” he laughed. “I wanted to get in it. Dick Slater let me break in, he gave me my first break.” Orndorff was basically schooled on the fly.

“My first debut was Knoxville, Tennessee. I didn’t own a pair of boots, trunk and had never rassled a day in my life. With God as my only witness, that’s the God’s truth. I broke in the hard way. No kidding,” he said. “I had [Ted] DiBiase, Slater, my brother, I had the Freebirds, I had people like that, Tony Charles, and I had people like that teaching me how to work.”

“I stayed the first year with my brother, and then I branched off from him,” said Terry. “It was T.O. and P.O., Paul Orndorff and Terry Orndorff, that’s what we had on our trunks.”

In the Mid-South territory run by Bill Watts, they teamed under the supervision of booker Buck Robley.

“Paul recommended him, I brought him in. We used him. He wasn’t as big or flashy as Paul,” said Robley. “We couldn’t keep them together because there was a difference in size and their ability. We were trying to slow Paul down to teach him how to work. Terry was alright. I tried to keep him in the middle of the road.”

In Mid-South, Orndorff teamed with the Junkyard Dog.

“Ain’t nobody can rassle for you, you’ve got to have something working for you. I became the Mid-South tag champion with The Dog,” Orndorff said. 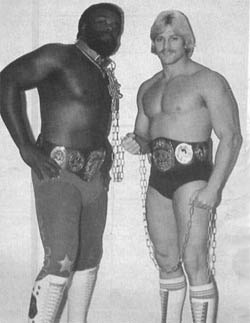 Terry Orndorff and the Junkyard Dog.

Like many of JYD’s partners over the years, Orndorff turned on him. Orndorff still remembers the stipulations from one of their TV matches.

“The loser of the match would wear a yellow mask for 60 days. I lost the match and I had to wear the yellow mask. But then I loaded it, and I whupped everybody — I even whupped Dog with it. So when the 60 days were up, I told the people on my interviews, ‘I kind of like this mask. I feel real lucky with it.’ It carried it on a little farther. I just wore it out, put it on, kicked their butt, put it back in my pants. We drawed houses. It made money,” said Orndorff.

The idea was that he was a yellow chicken, hiding behind the loaded mask, even though everyone knew it was him underneath it.

“I lost it [the match] and I had to wear the mask everywhere, even in the grocery store. I did it, I wore it everywhere,” said Orndorff. “But here’s the thing — nobody could whip me. Nobody whipped Dog, and I whipped the Dog, I beat the Dog right in the middle of the ring. I loaded the mask up, tapped him in the head, one-two-three.”

At the Superdome in New Orleans, on July 4, 1981, Paul worked twice, beating Jake Roberts to win the Mid-South North American Title, but losing in the main event to JYD in a “Lights Out” Match.

“We didn’t work it in the Dome, but it drawed the Dome. Paul, my brother, did a triple main event. I was chained to the ring. Every time Paul would bring him over, I had a 12-foot chain, and I’d beat him with it. They gave me 12-foot of chain,” recalled Terry, explaining that the stipulation was simply, “Terry Orndorff can be out there, but he’s got to be chained to the post.”

“It was scary to really, actually be chained in front of 30,000 people, actually really chained and you can’t get away,” he laughed, recalling that there was just a single security guard with the key to the chain. “If you’re in New Orleans, you’re in Dog’s country. There were a lot of black people there.” 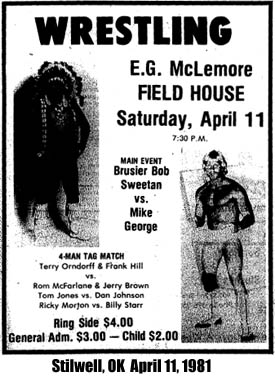 In Texas, Orndorff worked for the Von Erichs in the fall of 1981.

“I went into Texas and got the World’s belts with Kerry Von Erich. I didn’t like it there, they didn’t keep their promises with me, although they used me because I could get over real good,” said Orndorff. “I had that fire like Tommy ‘Wildfire’ Rich. And the looks, I got all the young girls out and stuff. They teamed me with Kerry Von Erich, but I didn’t stay that long. Bill Watts let me come right back to the Mid-South area.”

Orndorff said Fritz Von Erich, the owner of the promotion, gave him an ultimatum.

“So they put me with him, and his daddy called me in the office one day. ‘Orndorff,’ he says, ‘this is the way it’s going to be. Nobody’s going to get over my boys here.’ I said okay. He said, ‘Nobody gets over my boys.’ I said, ‘Okay, Mr. Von Erich.’ I think two weeks later I was back in Louisiana. I called Paul; Paul told Bill Watts that. He brought me back and we did the Superdome.” (Orndorff defeated Don Serrano at the New Orleans Superdome on November 26, 1981.)

The airplane spin, though quaint in comparison now, was his finisher.

Looking back, Orndorff is pleased about what he accomplished in the few years he was in the business.

“I don’t think in all my time I ever missed a match, nothing,” he said. “I loved it and I enjoyed it.”