Gangrel still a force at 42

At the age of 42, Gangrel is still spewing blood from his chalice, with his long blond hair, searing blue eyes and protruding fangs, as he heads to the ring to entertain wrestling fans. But a motorcycle accident this week, resulting in a fractured elbow and road rash, has derailed plans for him to head to Vancouver.

Gangrel, whose real name is Dave Heath, was hurt on Wednesday near his Los Angeles home. He was scheduled to be at the All-Star Wrestling show tonight at the Cloverdale Fairgrounds. “Waiting on police just got T boned on the Harley; life is sucking with a early flight in the a.m.,” he Tweeted on his Twitter account (@gangrel13). “Would like to apologize to the ASW fans up in B.C. does not look like I will be making flight in the a.m. [due] to injuries from cycle accident.” 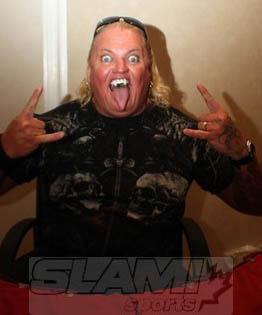 Gangrel at the Legends of the Ring 13 convention October 8, 2011. Photo by Christine Coons.

But when he talked to SLAM! Wrestling earlier this week, he was honest and forthright about his career in a two-part interview.

At 6’2″ and 270 pounds, Gangrel still makes a striking presence after a 25-year career with his skull tattoos on his hand and arms, gargoyle tattoo on one shoulder and two wolves with a bat tattoo on his other shoulder.

The vampire lifestyle isn’t really a part of his regular life any longer, however, because he feels he outgrew it. “I’m 42 years old, but in my younger years it was 24×7. I was at the bars all night long and art coves, living that kind of lifestyle. At that time, I believed to make the character work you had to live as that character, like an actor loses themselves in a role,” he said. “I don’t go around too much now hanging out in vampire parks. I do enjoy doing it for shows and going to functions as that character, but I don’t run in the orgies as I did back in the day and all that kind of crazy stuff.”

Halloween, though, still represents a special time of year for Gangrel. “It’s my favorite time of year. We already had one party at my house with vampires, ghouls, mummies, zombies, and what not destroying my house, but we’ve managed to put that back together. Halloween will probably be a quiet one. Wrestling, I’m always booked in October for the Halloween shows. I still love it.”

Currently, Gangrel, works for three companies on a regular basis: Wrestling Fan Experience (WFX), Vendetta Pro Wrestling, and the Territory League promotion. “I’ve been writing the show every week for the Territory League. We’re trying to get television for it, but it’s on the internet for free right now and we have sponsors for it. We’re looking at going all across the United States with it and not just the west coast.”

For the other two promotions, Gangrel mostly wrestles, but occasionally he’ll give a seminar on professional wrestling to those who want to learn, which is what he was scheduled to do on Thursday, and then get in the ring on Friday. David Hart Smith headlines the All-Star Wrestling show tonight.

Some of the younger talent that Gangrel has had an opportunity to work with, he believes has what it takes to make it the WWE one day. “One kid out there I’ve worked with over in England, but he’s from the United States, is Adam Cole (Ring of Honor). He’s a smaller guy, but I think he’s going to break through someday. Of course I’m proud of our student, development wrestler, Miroslav Barnyashev. He’s down in Florida Championship Wrestling development territory right now. We’re very proud of him. He had a bit of a knee problem, but once that’s cleared up, we should be seeing him in WWE. They’re got him wrestling under the name Alexander Rusev down there.”

One person Gangrel was very happy for was his friend and old Brood stable mate Edge, who retired earlier this year. “When I talked to him he seemed very sad, but he seemed very excited to be moving on. My thoughts were, I was glad he was able to do that because other wrestlers like me can’t afford to retire. We have to keep going because of bad financial decisions or choosing the wrong path. He was very smart and very frugal with money so he’s in the position to be able to do that. So I was sad because I knew how much he was going to miss it, but I was proud that he wasn’t the typical wrestler and valued his life far more.”

Gangrel feels he has been very fortunate to be able to work as a professional wrestler every week and not have to work at another job to supplement his income. However, he freely admits he didn’t plan to still be wrestling at this age. “I just didn’t make the right financial decisions. Luna [Vachon] and I separated after 18 years and I got freaked there. I kind of had to start life over financially and other ways. I’m 42 and I don’t want to be wrestling past the age of 45. So hopefully with some of these companies I’ll be able to get my ducks in a row and I won’t have to be wrestling much longer.”

One very distinct difference Gangrel noticed when he wrestled for many of the independent promotions after his time with the WWE were the expectations. “Earlier on I would just go in and wrestle whereas after my time with the WWE, they would want the puffy white shirt and the blood. Afterwards, though, I got booked more. Before all that I worked for more serious companies. Most people don’t realize I worked for ECW; I was working in Japan, Puerto Rico, South Memphis, and many others. I was always working full-time even up to my time with WWE. After my time with WWE it became more mainstream booking. They wanted that Gangrel character. It was a different group of companies. I wouldn’t say the amount I worked changed immediately afterwards, but on the backside of my career in 2011, I can say that it has helped me work more. It seems that people who loved that character when they were kids now have wrestling promotions or wrestle so they’re able to bring me in.”

As for the immediate future, after his recovery, Gangrel is considering a return to Europe for a month or two to wrestle starting in January and he hopes to continue working for the Wrestling Fan Experience (WFX), Vendetta Pro Wrestling, and the Territory League promotion. “WFX ran into some financial trouble earlier this year, but they’re a fun company to work for so I hope they’ll be starting up soon again.”