Behind the Gimmick Table: Ontario’s Matt Garrett rose above clowning 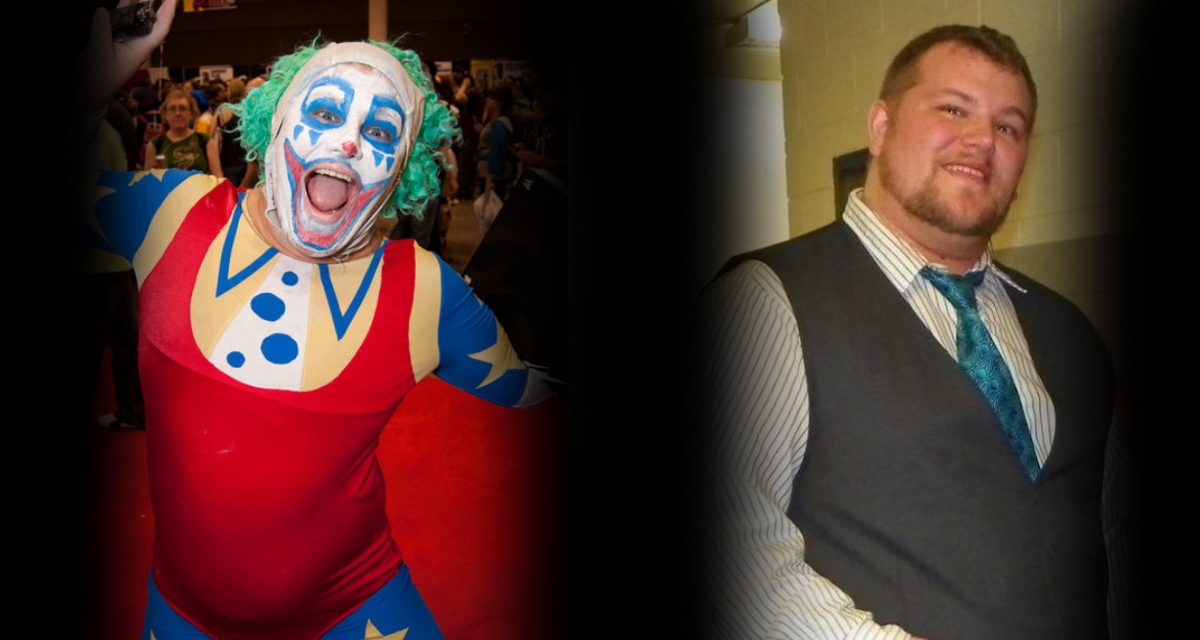 Matt Garrett is done with pro wrestling, his days in the ring and as a promoter behind him. His time in the business ended on a sour note in 2017 after a series of miscommunications during the final weekend of shows he promoted which left many critics unhappy. 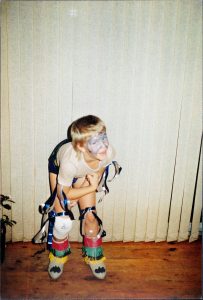 A young Matt Garrett as the Ultimate Warrior for Halloween.

He is a long-time fan. As a child (his real name is Matthew Lund), he regularly attended live WWF events in southern Ontario. As he reminisced on this topic to Slamwrestling.net, the promoter in him was evident as he rattled off not only the event names but attendances as well. Numerous house shows along with The Big Event and WrestleMania VI were each marked with the memento of a T-shirt, all of which he cherished by repeatedly wearing to the point of rendering them “completely worn out rags.”

One shirt in particular resulted in a memorable interaction at an amusement park. “At Canada’s Wonderland with my Mom, she took me to meet George Jetson, and he started doing the Bushwhacker dance when he saw my Bushwhacker shirt.”

The classic WWF figures by LJN were also a huge part of his childhood and Garrett’s parents would reward him with a new one after a two-week stretch of good behavior. Collecting fueled his desire to one day step into the ring. “At eight or nine years old, I thought, ‘I’d like to get in the ring with these guys.’ So I actually got in the ring and it just shattered underneath me. Who knew one day I’d actually get in the ring with half those guys.” 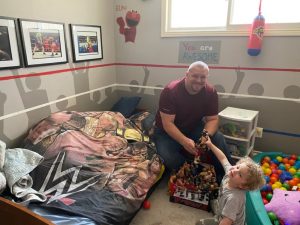 Although Garrett did not own any wrestling VHS tapes, he bartered his way to viewing many by working at the local video store in his hometown of Washago, Ontario, a small town two hours north of Toronto. At 10 years old, it was his first job and in exchange for putting away returns, he was able to get free rentals.

As Garrett matured, his interest in merch waned but his interest in wrestling didn’t. Attending WrestleMania X8 when he was 21 years of age became a crucial turning point. He bought his first merch in years, an nWo shirt and it was then that he decided to “put up or shut up” in regards to chasing his wrestling dreams.

He signed up at Sully’s Gym in Toronto the following week. He trained there under Ron Hutchison until it shut down less than one year later as the SARS pandemic hit the city.

Garrett ended up completing his training through monthly visits to Killer Kowalski’s school in Boston. Carpooling there also led him to his first ever booking, a battle royal match which also included “Brutal” Bob Evans and Eddie Edwards. 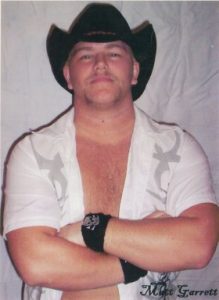 During the early part of his career, Garrett acknowledged that “enhancement talent” described him pretty well. “I was working many different shows and traveling quite a good distance between Boston, New York, Quebec, Saskatchewan, the Dakotas. But I was always the extra guy in the card, not the star taking off.”

The exception to this was his excursions on the infamous “Winter Death Tours” with Ernie Todd’s Canadian Wrestling Federation, an NWA affiliate at the time. Garrett’s way into the grueling and exclusive tours through the First Nations reservations in the Canadian Prairies via the ice roads of the northern tundra was negotiated by another wrestler/promoter Kryss Thorn.

Thorn had his own promotion: TWA (Thorn Wrestling Alliance.). He gave Garrett the inside scoop that sponsorships were the key to success in promoting. 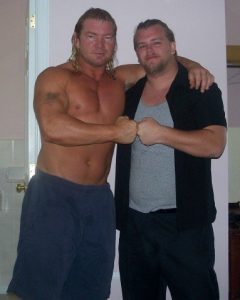 Todd and his CWF had success in this regard. As the top babyface on these cards Garrett, was primed to sell lots of 8×10 photos and t-shirts at the gimmick table. Garrett alleged that Todd’s “greed” put a hamper on the possibility of making much money. “He wanted you in the ring at intermission doing Polaroids and he never gave a cut of that to the boys. He kept that for himself. So that cut my ability to sell my own merch.”

Following Thorne’s tips, Garrett began producing events during his off time from tours. Although the attendance was initially poor, the sponsorships made the events worthwhile.

Garrett spent more money and made more money. “I promoted my first show on a Wednesday night. It was $200 less. In hindsight I should have paid $200 more for a Friday.”

But on his journey to promoting regularly, another opportunity presented itself. 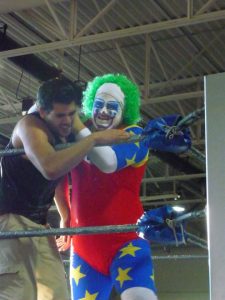 Garrett worked as Doink the Clown for the first time for southwestern Ontario promoter Doug Felton. Fake Doinks have been a staple of independent wrestling since Matt Borne first donned the face paint and clown suit in WWE, and Garrett was Ontario’s resident imitation clown for a decade.

The Doink gig was never his idea. It was arranged by his opponent for the tour who negotiated a sweetheart deal that ended up landing Garrett his own Doink suit and promoters, which resulted in plenty more clown gigs.

Garrett made an effort to carve his own non-Doink clown path but it was for naught. Despite his efforts to be promoted as “Boink” or “Son of Doink” the promoters he worked for preferred to advertise him as the genuine article. “I should have invested in my own unique clown gimmick,” he lamented. 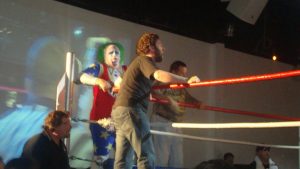 Despite his hesitancy, Garrett couldn’t turn down the bookings and prominence the gimmick provided. “Bookers were calling. Bigger and bigger shows and it felt good to be a call girl rather than a street walker as Jake Roberts put it.”

Garrett’s initial contact with the oldest of Stu and Helen’s kids came through Smith’s son, Mike, who he had booked on one of his early events. “Mike called me about two weeks later bawling his eyes out. ‘My girlfriend kicked me out, I’m never gonna see my kids again … I need a place to go stay.’ So I said, ‘Come stay with me.’” However Hart was unable to follow Garrett’s house rules like and moved out to elsewhere in Barrie, Ontario, within five days of moving in. 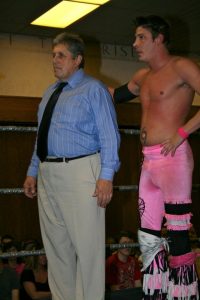 Smith Hart and his son Mike.

With his son Mike now living in town, Smith Hart was drawn to the area. He ended up living not far from Garrett and the two became fast friends. When Hart was involved in the WrestleMania 26 match between Bret Hart and Vince McMahon, Smith was able to choose a single guest to accompany him, he chose Garrett. At that point, Garrett became Hart’s de facto manager.

Alongside Hart, Garrett would promote some of the most well attended and successful independent events in Ontario including a brief resurgence of Stampede Wrestling. The duo would also make memorable appearances on CBC’s Dragon’s Den and were involved in Justin Rego’s shot on The Bachelor. 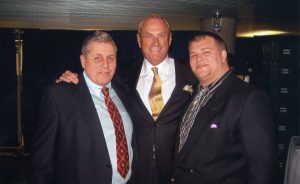 Since Smith Hart’s passing in 2017, Garrett’s interest in wrestling has waned significantly. He has thought a lot about what could have been. “I should have focused on a smaller promotion and booked my friends. I was the guy who wanted to be a booker so I had to run my own shows to be a booker. I always thought and still think when it comes to booking and the layout there’s not many people on the planet that can touch me.”

These days, instead of canvasing for sponsors and putting up posters, Garrett spends most of his time on his acreage in Ontario’s Tay Township with his wife and two children. He has traded in his clown outfit for a suit to work behind the scenes for the Green Party of Canada, and has been working with the minister of tourism, culture and sport in an attempt to deregulate mixed martial arts in Ontario.