Ron Hutchison is often recognized as the trainer of champions, with names like Edge, Christian, Trish Stratus, Beth Phoenix, Gail Kim, Joe E. Legend, Tiger Ali Singh, Kizarny/Sinn, and Traci Brooks to his credit. But first, he was known as a great worker in Maple Leaf Wrestling, Grand Prix Wrestling and on the Ontario indy scene in the mid ’80s.

But starting Friday, he is putting back on the masked Thunderbolt costume for a tour of the Canadian Maritime provinces. 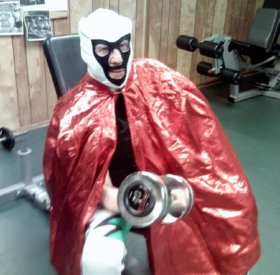 Thunderbolt Ron Hutchison gets into shape for his return to wrestling after 30 years.

“Why not?” Hutchison replied to SLAM Wrestling. “It has been over 25 years since I’ve wrestled in the Maritimes as Thunderbolt. I feel great and I’d like to believe my experience will compensate for being inactive as a wrestler for a while.”

Truthfully, Hutchison really hasn’t been out of the ring since he stopped wrestling. Since 1990, he has been training many up and coming wrestlers, a few curious Canadian Football League players, and even the girls of Carmen Electra’s Naked Women’s Wrestling League.

The call came a while back from famous Maritimes promoter Emile Dupre who wanted to organize and revive wrestling and asked Hutchison if he could help in any capacity, primarily looking for suggestions for talent. He hadn’t wrestled in the Maritimes since 1988 and since Dupre gave him a chance to wrestle there every summer when he was active, it was important for Hutchison to give back to Emile and readily accepted.

“When Emile called me and asked to help, I thought it was to book the matches and maybe help the up and coming wrestlers with their matches, but he then asked me if I wanted to wrestle,” said Hutchison. “It took me a split second to accept.”

The Dupre family, Emile, his wife Paula, and his sons Jeff and former WWE tag team champion René Dupre, have always been good to their friends and wrestlers, so it was a no brainer for Hutchison.

Amongst the wrestlers on this tour will be Kwan Chang, New Japan rising star Seiya Sanada, She Nay Nay, CNWA champion Bobby Sharp, who Hutchison had the pleasure to meet at the recent Cauliflower Alley Club convention in Las Vegas where Sharp received the Future Legend Award. “It will be a pleasure to see Bobby again; he is a credit to our sport, such a classy guy out of the ring, yet, an intense competitor in the ring. When he was called to be part of this, he jumped on board right away.”

But it was a female wrestler by the name of Erin Angel that convinced Hutchison that he had made the right decision. Even though she has never met him, Angel sent him a message through Facebook to let him know she was so stoked he accepted to be part of the tour and honoured to finally meet a legend.

Mind you, former WWE champion, René Dupre, also let Hutchison know that he was excited of the fact that he was part of the tour, although, Hutchison hasn’t seen Dupre since he was eight years old.

“It’s a no brainer,” said René Dupre. “When you have an experienced talent like Ron offering his services it will only make the show that much better.” 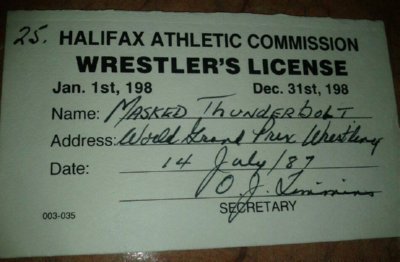 Proof that Thunderbolt worked the Maritimes back in the day.

It was during a wrestling tour of India a few years ago that some got to know the real person Hutchison really is. Hutchison was the only one on the tour with a first-class plane ticket, and all the others were sitting in economy; Hutchison would go back with the rest of them and give everyone a chance to enjoy the first-class seat while he was mingling with the others.

“It’s kinda strange that when I was wrestling for Emile in the ’80s, I was the young up and coming guy while looking up to such veterans wrestling there, Bulldog Brown, Leo Burke, the Cuban Assassin, and even Ric Flair’s appearances, but now, I’m the grizzled veteran.”

Hutchison has received many emails and messages through his Facebook page from fans and how excited they are that he’s coming back: But his best memory from maritime fans is from a superfan, Heather, that heckled Thunderbolt every time she could back in the day. So during the end of his last summer there, he decided to “reward” Heather by acknowledging her with a special recognition award. So after he took the microphone and praised her for a few minutes almost to get her to believe that Thunderbolt wasn’t such a bad heel, proceeded to dump a mackerel on her lap and made her crazy: “It was so funny to see her face, I hope she can come back again and we can go at it all over.”

Ron Hutchison is anxious to get going and hopes to be able to teach the young crew a thing or two, but he fully expects to learn from that experience too. If his wrestling history and the results from his former students are a sign of what’s coming up, it’s a win/win situation for all, but mostly, for Maritimes wrestling fans.