To give you an idea of what Mick McManus meant to British pro wrestling, consider that he and Jackie Pallo once had a bout before a FA Cup soccer final — and outdrew the game. With McManus’ passing today, at the age of 93, one of the links to the golden age of the World of Sport is gone.

According to reports, McManus had been in a coma for a few days in a nursing home for retired actors, and died at one in the morning today in Britain. He had been in poor health and poor spirits since the passing of his wife Barbara. 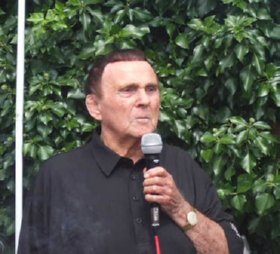 Mick McManus takes to the microphone at a 2007 reunion of British wrestlers. Photo by Retroschmit

The put it simply, Mick McManus was the greatest villain in the history of professional wrestling in the United Kingdom. By his own count, he was on television at least once a month for 26 years.

“Mick McManus was a household name in the UK for the better part of three decades, from the 1960s to the 1980s,” explained Brian Elliott, editor of the British magazine Fighting Spirit. “That term, much like ‘legend,’ has been overused greatly, but McManus is a true example of both, in the days where millions of people gathered around their televisions every Saturday afternoon to watch what was colloquially known as ‘The Wrestling.’ To wrestling fans, McManus was an icon. To the average TV viewer, he was a star. To his friends and colleagues, this is a dreadfully sad day.”

McManus was born William George Matthews on January 11, 1920, on Old Kent Road in London, England. As a teenager, growing up in the southeastern part of London known as New Cross, he was into amateur wrestling, and joined the John Ruskin Club to improve his skills. He served his country in the Royal Air Force.

Starting in 1947, he wrestled for 30 years, protecting his cauliflowered ears, his slicked-back black hair never changing as he delivered his famed forearm smashes, retiring in 1981 and moving into the promotional end of things with Dale Martin Promotions.

“I owe wrestling a great deal — it has given me so much,” McManus said in the 1983 book Sportsviewers Guide Wrestling by Peter Bills. “I’ve met interesting people, travelled the world and enjoy a good lifestyle through the sport. I started in 1948-49 as a professional but had been wrestling before that. But I’m not sure where the connection came from because my father wasn’t a wrestler or anything like that. I had two friends who were professional wrestlers and I used to train with them. I suppose it developed from that.”

McManus’ villainy came from not always obeying the more strictly-enforced rules in the British wrestling world, which included breaks each round. But give his smaller size, 5-foot-6, 175 pounds, he was more of a conniving heel than a monster.

In This Grappling Game, famed British announcer Kent Walton described McManus: “He climbs into the ring, disrobes in a leisurely manner. For all the notice he takes of the crowd’s frenzy he might be stone-deaf. The bell clangs. The rough-stuff commences. The other guy wants to wrestle. Mick acts as if he’d never even heard of the game. He is a rule-bender beyond the wildest dreams of an American TV-lawyer. He gets away with murder and throws arson in for an encore. How? Sheer craft. Watch him turn his opponent away to the ref’s blind side whenever he wants to ‘pull a stroke’. Which is only for the duration of the bout, generally. Finally the luckless opponent is out-roughed, out-slugged and out-pointed. Not to mention, usually, just plain ‘out’. Mick McManus wins again.”

He told Bills that he never set out to be bad. “[It] just happened like that,” he said. “Perhaps it was taking advantage and doing things like trying to climb over people, that sort of thing. But although it angered some folk, it was a successful formula and I never thought of changing it.”

In Simon Garfield’s book, The Wrestling — essential reading — McManus talked about working the fans. “I used to love the crowds, especially the way I’d wrestle. I used to get a kick out of manipulating the hordes. I’m not being big headed, but I could really bring them up and down and drive them made and then tone them right down, keep them quiet and sort of wrestle sometimes, not doing anything particularly bad, just wrestle nicely and it was like waiting for the other boot to drop, they never knew when I was going to start doing something which I shouldn’t do, something which they didn’t like, something which they could scream and shout at.”

As well as his skill in the ring, McManus was great on the microphone as well, whether on commentary during the matches, or on TV appearances on mainstream shows. He knew how to promote himself. At various times, he had a newspaper column, a line of vitamins, and put out a book in 1970 — Mick McManus Wrestling Book. But he wasn’t selfish either, as many of his appearances were for charity.

In a 2002 interview with The Lilsboys in The Sun, McManus was asked what the high point of his career was. “There were a lot of high points. The ones which stood out were when I wrestled in the presence of the Royal Family,” he responded. “They stand out as a bit special. I understand that the Royals were fans of ours, Prince Charles and the Duke of Edinburgh, and even the Queen used to have a bit of a sneaky look on Saturday afternoons.”

Every great villain needs a noble hero to work against, and for McManus, it was “Mr. TV” Jackie Pallo (though Pallo had been a heel earlier). They battled off an on for years. One memorable angle had McManus planting a kiss on the cheek of an unsuspecting Mrs. Pallo at ringside.

The great British wrestling website, Wrestlingheritage.co.uk, has a column on McManus, The Man We Loved To Hate?

The story calls McManus versus Pallo “the greatest feud that British wrestling has ever known.”

“The pair’s fortunes were sealed, and over 5 years they exploited their mutual hatred to the full inside and outside the ring, the two Cup Final day match-ups forming the absolute pinnacle of British wrestling’s fortunes. Ever. McManus remained undefeated in his sixties matches with Pallo. The arrival of Jackie Pallo Junior on the scene allowed new angles.”

In his autobiography, You Grunt, I’ll Groan, Pallo said that the boys in the back had nicknamed McManus “Paramount” because “they reckoned all his bills were like a mountain with a star on top, just like the film company’s trade mark.

“Our Mick, of course, was the star, and the mountain was the supporting cast. Nevertheless, whether it was single combat or tag (pairs) wrestling, Mick generally stuck to the well-tried formula of good versus evil, like in western films and pantomime, the only difference being that good frequently did not triumph.”

While Mick McManus never brought his act to America, he did travel and wrestling, including Spain, Nigeria, France, Zambia, Kuwait and Jordan. He held numerous titles, including the British Middleweight and Welterweight belts, and the European Middleweight championship. In 2012, he was inducted into the Wrestling Observer Newsletter Hall of Fame.

Away from the ring, McManus was an expert on antique china and loved to golf. During the 1990s and until his retirement, he was involved in public relations for Anixter, meeting customers and suppliers, organizing dinners, golf outings, and other functions.

“I still get recognised in the street, very much so,” McManus said in 2002.