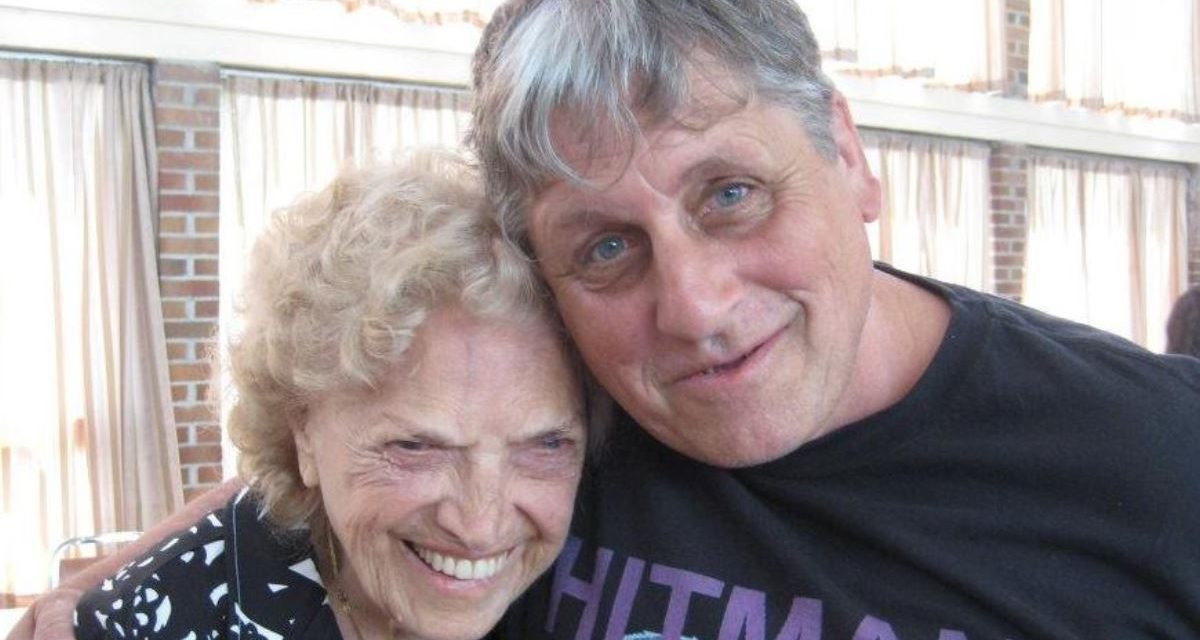 Smith Hart, the oldest of the Hart brothers, and the self-described “black sheep” of the family has died after a lengthy battle with cancer. He was 68 years old.

The oldest child of Stu and Helen Hart, he was actually born November 28, 1948, in New York City, where Stu was wrestling at the time. When Stu and Helen moved to Montana and subsequently took over the Calgary Wildcat Wrestling promotion, Smith remained in New York with his grandparents. Smith’s grandfather an Olympic Miler who had set the world record in 1912, was particularly fond of his first grandchild as he had only fathered daughters and finally got the chance to raise the son he had always wished for. Stu and Helen would be involved in a car accident during that time as well and Helen required major facial reconstruction surgery. 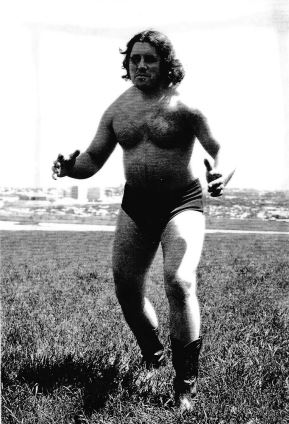 When Smith was three, he was brought to live in Calgary with his parents, who by this time had been joined by younger siblings Bruce and Keith. The car accident and subsequent lawsuit, had delayed this from happening sooner. Smith found the transition challenging as he was adored in New York by his aunts and grandparents but found discipline and rules under the roof of his parents.

Smith was not only loved by Stu and Helen but was the treasured nephew of Helen’s four adoring sisters who doted upon Smith as their own.

As a teenager Smith spent his summer days at the family’s Clearwater Beach property, a popular swimming hole that attracted visitors from miles away. Smith would go on to attend the University of Calgary studying English Literature. In 1973, Smith and his then girlfriend Marla would welcome the first grandchild to Stu and Helen, Tobi.

By now, the wrestling world knows the stories of the Hart Family and Stampede Wrestling. From their sprawling mansion in Calgary, Stu promoted wrestling across the Canadian west and south into Montana and Idaho, while Helen managed the promotion. As the children aged, they got involved too, from selling programs to entertaining the revolving door of wrestlers at the home, to eventually refereeing and, in some cases, wrestling.

Smith Hart started as a referee and debuted as a wrestler. In comparison to the fame achieved by his younger brothers Bret and Owen, and to a lesser extent Bruce, Smith’s wrestling career doesn’t shine the same way — but it did last, roughly 18 years off and on.

In 1973, Smith was sent to work and study in Japan for International Wrestling Enterprise. A promotion he would hold multiple championships in.

After a year in Japan, Smith would begin working regular tours of England, Scotland, Germany, Netherlands and other European countries, wrestling for top companies such as the original World of Sport. It was here that he originally discovered Davey Boy Smith. Although Bruce is credited with bringing Davey Boy Smith and Dynamite Kid to Canada originally, it was Smith who first discovered Davey.

In 1978, Smith and brother Bret would discover the island paradise of Puerto Rico. It become his favourite place to wrestle. Stampede proteges Carlos Colon and Victor Jovica had opened up a territory and were bringing in a multitude of Stampede wrestling stars to launch the product. Smith and Bret promptly won the tag team championships. Smith would eventually meet his beautiful bride Maria in Puerto Rico and together welcomed daughter Satania to the world. Smith found solace in the island nation and made it his home for many years between tours.

Smith also worked in Japan and in England, where he was Smithy Hart in 1980.

Smith would retire from the ring officially in 1986 and would take to training the next generation of wrestlers. Smith alongside brothers Bruce, Keith and Ross helped train such notable stars as Chris Benoit, Brian Pillman and Jushin Liger.

After the passing of Smith’s wife Maria, Smith fell in love with the beautiful Lianne with whom sons Michael and Matthew were born to. In the late nineties Smith would move his family to Cambridge, Ontario to launch a wrestling school. Partnered with former WWWF star Waldo Von Erich, the school would produce some of the best talent of this generation including Eric Young, Highlanders Robbie & Rory McAllister, Tye Dillinger and many more.

“I’ve never needed a break from the business, I think there are aspects of this business that are hard to love, but I am trying to use my influence to correct such aspects of the business I love,” Smith told writer Brian Waters in 2011.

Smith’s involvement with the school became limited as he was called back to Calgary embroiled in a custody battle over his youngest child Chad with whom he had with the beautiful Zo. One of Smith’s biggest regrets in life would always be the fact he was not able to raise his son Chad directly and missed incredible amounts of time.

Smith was never afraid to drop the Hart name, including lending it to Joe Frocklage — a.k.a. Ike Shaw — and Waldo Von Erich for the Hart Brothers Wrestling School in Cambridge, Ontario, that produced Eric Young, among others.

In 2011, he went on CBC’s Dragon’s Den to try to get financing to start up another promotion under the Hart name.

“The Hart name is sort of what I’m pushing, Stu Hart’s brand of wrestling,” he said at the time. “It was just that we were all stiff and solid out there, and maybe my dad liked submission wrestlers, guys that could hold their own in a lot of circles. It was more good, sensible issues that people could identify with.”

Hart admitted that he was unprepared for the TV show and the pitch.

“When I met some of the Dragon’s Den, on sort of a handshake thing, I wasn’t ready to really prepared to pitch anything right away — I was thinking maybe a year from now, when I have a bit of a track record. But they were adamant that I do it now, especially Jim Treliving,” he said. Smith was told to go for it while he had the chance. “That was one of the downfalls — we had nothing to show them outside the Hart name and the little match we put on with a couple of guys. Exposure is always good in our business.” 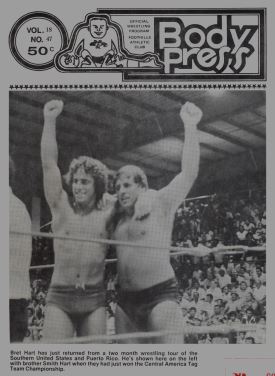 Smith and Bret on a 1978 Stampede program.

Smith Hart also got some exposure through his brothers in WWE, including trying to climb the cage at 1994’s SummerSlam where Bret faced Owen, and at WrestleMania 26, where he was one of the Harts who helped Bret beat Vince McMahon in a No Holds Barred bout. Smith was also on stage with the rest of the family when Stu Hart was inducted into the WWE Hall of Fame.

A major fan of the history of wrestling, Smith often made trips to events like the Professional Wrestling Hall of Fame inductions, which were in Amsterdam, NY, at the time.

Smith was an avid environmentalist, a humanitarian, a comical jokester, a creative force and ultimately the proverbial heart of the Hart family.

Never shy at speaking his mind, Smith Hart often posted long columns on social media, especially, Facebook, about the state of the wrestling business, and various angles and news. It was there that he broke the news in January 2016 that he revealed his cancer diagnosis:

“This week my doctors confirmed that I have both prostate cancer and bone cancer. I have not yet received a full prognosis on what is yet to come nor my options for treatment. It is quite sad that despite the millions that have died from this tragic disease and the billions that have been raised for research that this ailment has yet to be eradicated from history. Given the diagnosis I will be spending my upcoming time focused on finishing and hopefully releasing my autobiography, which I anticipate to be a full and comprehensive look at my family, Stampede wrestling and some of the most notable moments in wrestling history as I was able to ride shotgun and have first-hand witness account to 66 years of the Hart families triumphs and tragedies. Thanks for the prayers, but hold on because I am not done fighting yet. 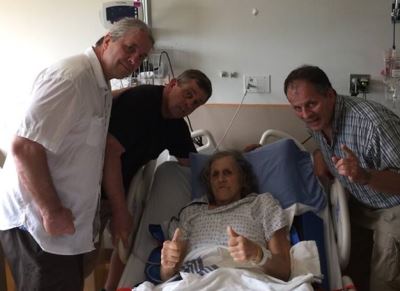 Bret, Keith and Ross Hart visit their ailing brother in late May 2017.

Pre-deceased by his parents Stu and Helen, his siblings Owen and Dean, his wives Maria, Marla, Lianne and Zo, he is now survived by his children Tobi, Satania, Michael, Matthew and Chad as well as his grandchildren Allison, Jessica and Isabella. Michael and Matthew both are professional wrestlers under the Hart name.