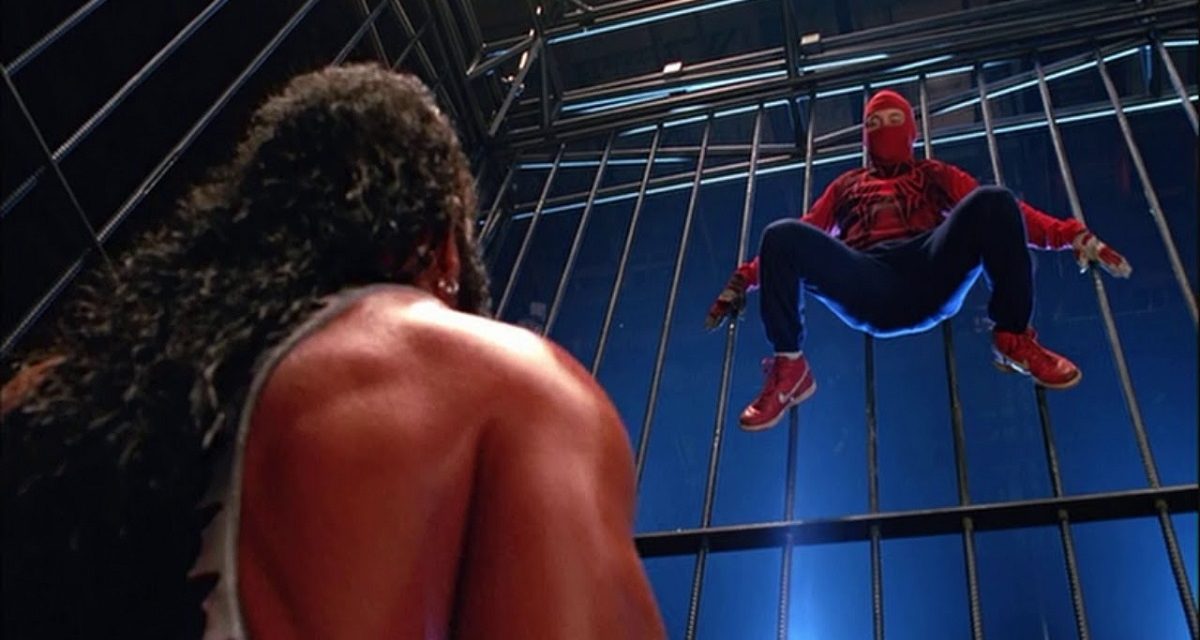 Spider-Man went through a long and arduous journey to make a legitimate splash on the big screen. The character was introduced in 1962’s Amazing Fantasy #15, yet he trailed far behind both time-honoured super-heroes such as Superman (1978) and modern warriors like Blade (1998, and check out Blade: Trinity with Triple H) in terms of a classic on-screen portrayal. Would the long wait for Spider-Man’s big summer movie be worth it?

Yes. Spider-Man is one of the best-paced and most effectively structured super-hero movies ever put together. You all know that story: Peter Parker (Maguire, Seabiscuit, Pleasantville) is bitten by a radioactive spider and becomes Spider-Man to fulfill the responsibility given to someone with super powers. Truth be told, though, give any teenager super powers and, before they dedicate their life to fighting crime, they’re going to have some fun. This is how Parker ends up inside a wrestling ring fighting Bonesaw McGraw (Randy Savage, Ready To Rumble, Sting: Moment of Truth) for a cash prize to help the struggling teenager buy a car.

The ultimate significance of Parker’s wrestling match is continuous between the film and the story in Amazing Fantasy — it launches a chain of events that lead to the death of Peter’s Uncle Ben and subsequently the true birth of Spider-Man. In the original story, Parker dons blue jeans, a sweatshirt and a mesh mask as simple protection against being embarrassed if he doesn’t fare well in the ring. 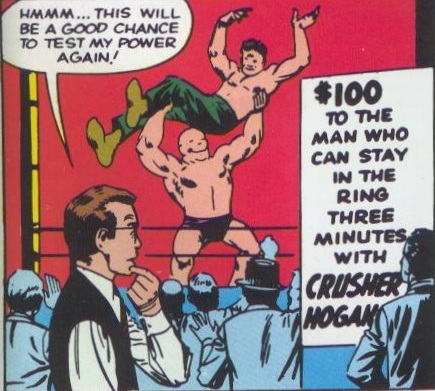 The wrestler is a brute by the name of Crusher Hogan, who plans on making quick work of the pipsqueak across the ring from him. We aren’t privy to very much action inside the ring, and after just a few panels Crusher is crying for mercy and Parker is on his way to becoming a media darling. In the film, we’re treated to a greatly expanded wrestling match, complete with Spidey’s first foray into his famous trash-talking style –- “That’s a cute outfit, did your husband give it to you?” Spider-Man or not, it takes guts to say that to Randy Savage. Savage, who coincidentally wrestled in his early years under the name The Spider Friend with a character similar in nature to Spider-Man, is a lot of fun to watch in the role, but you have to wonder if those uninitiated in the need to occasionally mentally translate his dialogue managed to catch all of his lines.

The little twist of making it a cage match between Spider-Man and McGraw is not explained, and one wonders why they pick on the smallest kid of the night to punish that way, but for the treat of seeing Spidey swinging from webs around the cage it’s worth the lack of reason. Savage also had fun staying in character for an interview in Wrestling Digest, announcing that “I want to issue a rematch to Spider-Man, so I can get one more chance to kick his butt. I think I can get him this time.”

It’s also a blast seeing Spider-Man use his acute senses to escape danger, and perform acrobatic tricks like Hurricane Helms could only dream of. Fighting crime is a noble calling and all, but sometimes one wonders how many screwy match endings could be prevented if someone like Spider-Man took up refereeing. Imagine, a ref who never misses an illegal tag or chokehold behind his back…