Impact Wrestling announcer Josh Mathews could have signed with Total Non-stop Action Wrestling to compete at the company’s debut show, but opted to take a broadcast role with WWE, where he spent the first 13 years of his professional career. But this Sunday, Mathews will step into the ring at Impact’s premiere event, Slammiversary.

“It’s just the culmination of 15 years,” said Mathews, who has been with Impact since 2014. “The coming home for Jeff Jarrett. It’s the fact that I had a contract with Impact Wrestling to compete on their first show … [and I] called them up and asked them to rip it up so I could go work for Vince McMahon.”

Mathews spent more than decade with WWE, taking on roles ranging from backstage interviewer to host of “After Burn” and “Byte This!” to color commentator on Smackdown! and at WrestleMania.

Since making the jump to Impact, Mathews has continued announcing and also has taken on the role of vice president of digital, a position he acquired as others left the company. Combining an office position with announcing is something he has always wanted to do. However, during his WWE tenure, Mathews was “fully focused on how to be an announcer,” and practiced in the same vein as NXT “before NXT even existed.” 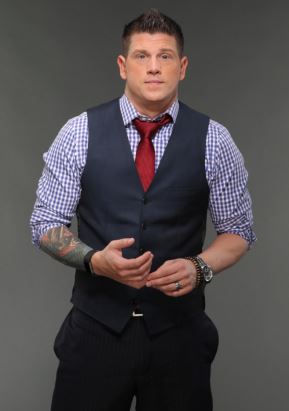 “I would grab an audio engineer, throw a tape in and I’d practice calling matches… Once I felt that I got that under my belt, then I tried to grow and expand,” Mathews said.

Mathews, who has boasted about being the the greatest announcer of all time — to the extent that he at one point included a goat emoji on his Twitter profile — said there’s no difference between his self-proclaimed title in the worlds of professional wrestling or sports entertainment.

“It’s everything,” Mathews said, slipping into character. “I think I could step into the World Series, the Super Bowl… [and be better than] any network host that’s hired.”

More recently, he has taken to the ring as his issues with fellow commentator Jeremy Borash escalated to the point where they will face off at Slammiversary, with Scott Steiner and Joseph Parks as their respective tag team partners.

When looking at other announcers who have stepped in the squared circle, ala Michael Cole, Mathews — not quite shifting into character — said that’s “really not a fair comparison.”

“Michael was a broadcaster his whole life,” Mathews said. “I was a wrestler who became an announcer… [I did a] swanton bomb that I hadn’t done in 12 years, and it was beautiful.”

Stepping fully into his brash persona, Mathews said Borash and Park will “feel the wrath” of Scott Steiner come Slammiversary.

“The acquisition of Scott Steiner was perfectly in tune with how I wanted this to go… Nobody saw this coming, especially Tweedle Dee and Tweedle Dumbass,” said Mathews, who has lost 17 pounds in preparation for the bout.

“I’m not taking this lightly,” Mathews said. “Obviously, I will not make a fool of myself on the 2nd.”

But as a lifelong wrestling fan, Mathews said teaming up with someone the stature of Scott Steiner, a member of the George Tragos/Lou Thesz Professional Wrestling Hall of Fame who boasts multiple tag and singles championships, is great.

“I loved Scott as a kid in WCW… [When he came to WWE], I was sort of in awe of him,” Mathews said. “There are two people in this business I was literally in awe of when I would see them. Brock Lesnar being one and Scott Steiner being the other.”

Mathews said his transition to a bigger character — perhaps the greatest of all time — came easier, as someone who has experience both in the ring and behind the mic.

“I basically got to watch some of the biggest moments in wrestling history from a few feet away and without a script,” Mathews said, noting that commentators are typically the ones who talk the most without scripts. “You get to sort of come up with one liners and jokes and Bobby ‘The Brain’ Heenan lines from things past.” 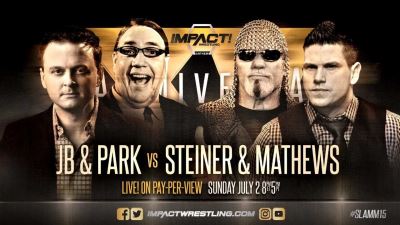 As far as the wrestling side, Mathews said, the “instinct is there.” His first foray into the wrestling business was with the intent of becoming an in-ring competitor. Mathews, real name Josh Lomberger, was one of the original competitors on the first season of WWE’s Tough Enough, in which one male and one female won a WWE contract. Though Mathews was the runner-up to Maven, he later was offered an announcing role with the largest wrestling company in the world.

“I never really looked back,” Mathews said. “I’m more of a forward thinker, but when the opportunity arose to be an announcer … I had to take it.”

In the time between Tough Enough and the WWE offer, Mathews went to the independent scene, though he said he didn’t enjoy the long drives and the grind of the independents.

“I didn’t like it because, I think, I started with the biggest wrestling company in the world and went backwards… It was not for me,” Mathews said.