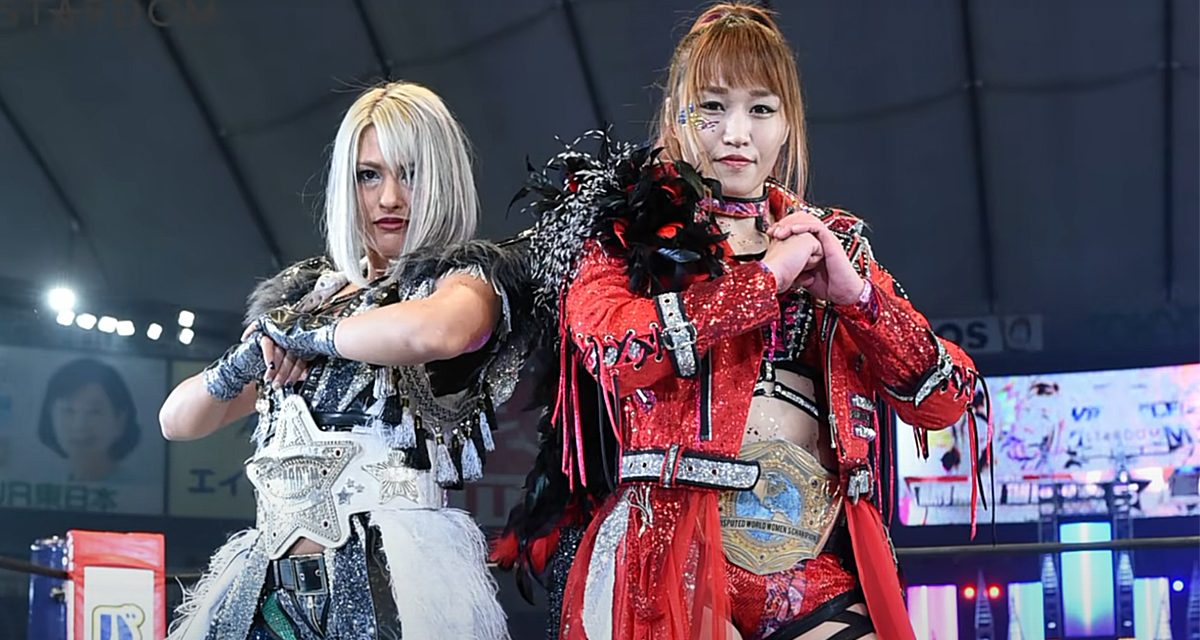 If I have learned anything watching pro-wrestling for longer than I would care to admit it is that generally the very best women wrestlers in the world have at some time during their careers trained and worked in Japan or Mexico.

Sure, there are some fantastic modern North American standouts like Bayley, Shayna Baszler, Bianca Belair, Ember Moon, Mercedes Martinez, Rhea Ripley, Serena Deeb and the list goes on but the truly exceptional stars like Asuka, Hikaru Shida, Io Shirai and Thunder Rosa all trained, worked somewhere other than North America and if you check out any of their previous work you will surely see how much they have “dumbed down” their skills to fit in with North American promotions. 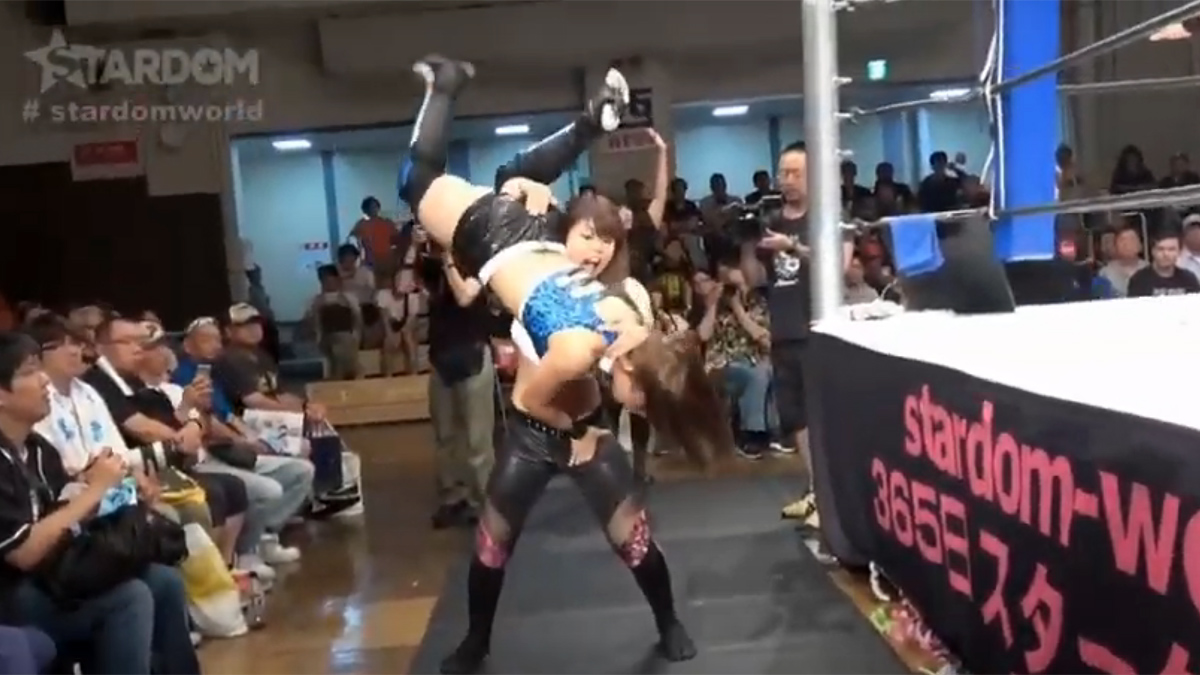 Momo Watanabe versus Hazuki gets nasty on the floor. Courtesy: Stardom.

Veteran companies like WWE, Impact and Ring of Honor as well as their strictly female counterparts (except for maybe SHIMMER) don’t even rank with how women’s wrestling has been promoted and received in Japan. At present there are seven female wrestling promotions with Ice Ribbon and Stardom leading the pack whereas the WWE and others have never ventured into that territory. Back in the eighties there was only one promotion: All Japan Women’s Pro-Wrestling. Garnering the support of Japanese wrestling legend Antonio Inoki helped the promotion gain wide-spread popularity there. All Japan Women’s Pro-Wrestling ended up fracturing into two promotions: Ladies Legend Pro-Wrestling and JWP Joshi Puroresu years later. The Japanese promotions have been so popular that many of their superstars have become pop culture icons who were featured in seven video games which were not mixed bag releases like we see with WWE and others that have female and male superstars in one game. 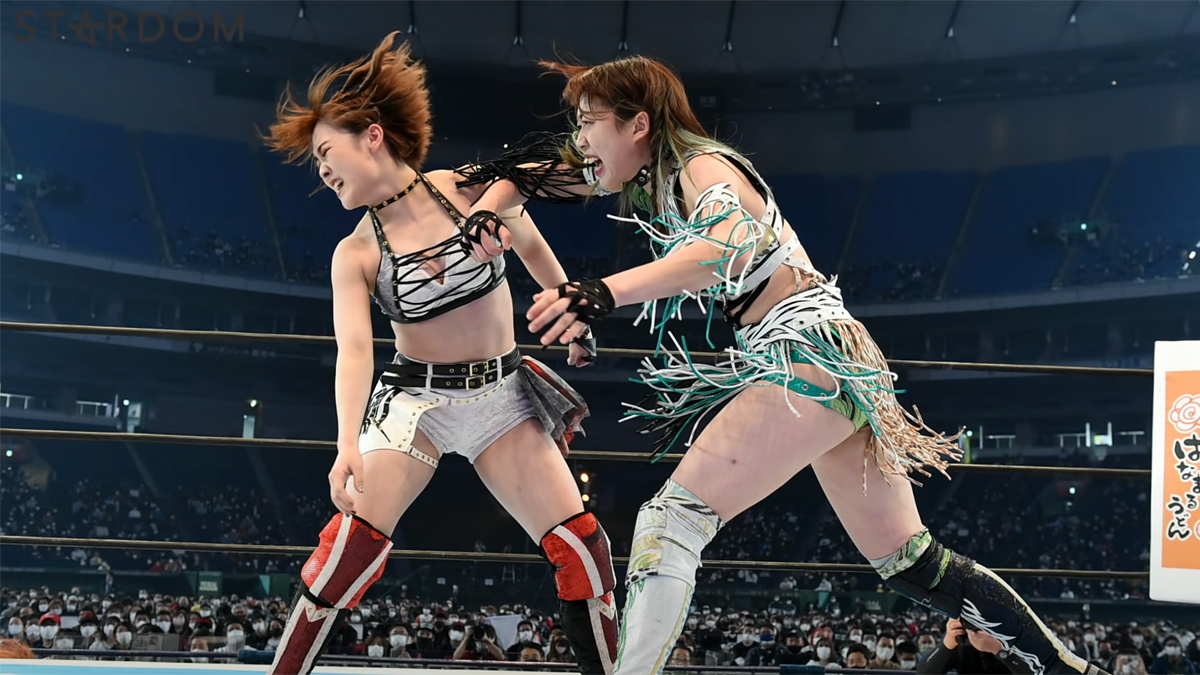 Considering how many superstars they have on their roster one wonders why the WWE especially haven’t created its own female promotion or brand to perhaps run in parallel or conjunction with Raw and Smackdown. If nothing else it would give all those superstars, everyone television time. Checking out social media the fan base is clearly there, unless those people are just talking the talk but don’t actually walk the walk, which could be the case. It is so easy to take a particular stand on social media for popularity and likes but actually practicing what you preach in your daily life is a whole other matter entirely.

Although the WWE and Impact in particular have a massive female roster we haven’t seen anything beyond all-women pay-per-views once in a blue moon yet Stardom puts on all manner of shows, PPV events and even has its own streaming service for $12 a month in Canada and $9 in the USA. Stardom also posts matches on its YouTube channel like NJPW as well so that fans can keep up to date despite their being no weekly show on North American television. 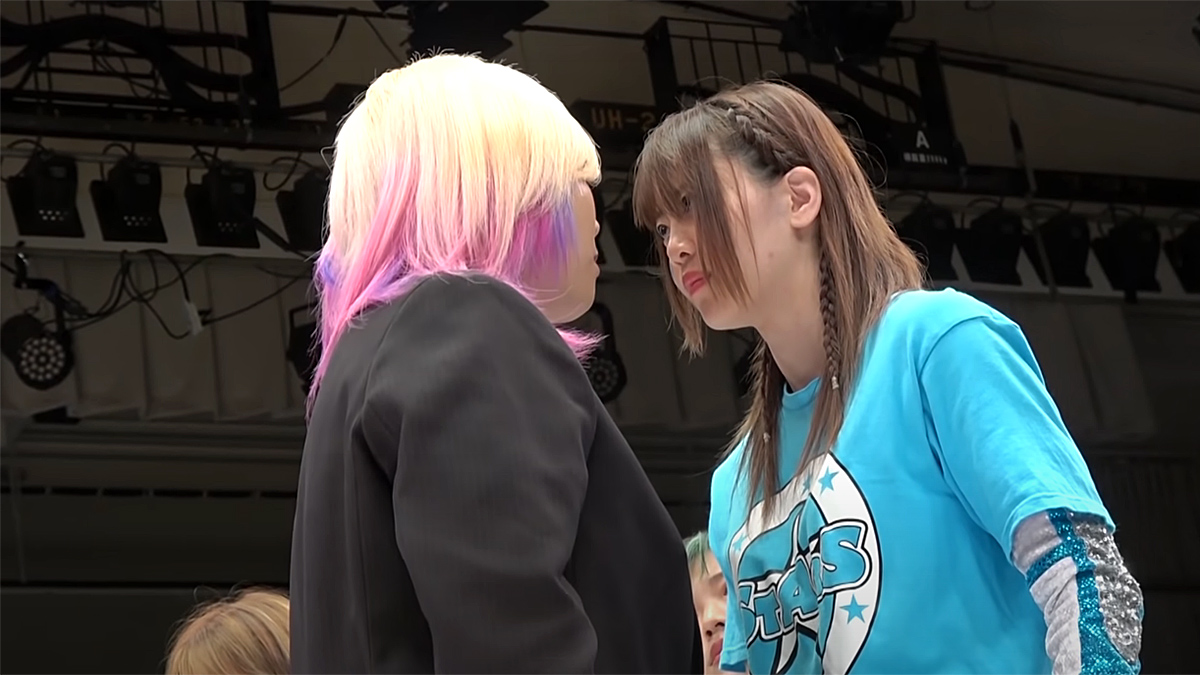 No subtitles needed. These two don’t like each other. Courtesy: Stardom.

Stardom is a no-frills captivating promotion that won my fandom without even trying. I grew up on a steady diet of Mid-Atlantic Wrestling and George Cannon’s Superstars of Wrestling so those no-frill promotions hold a special place in my heart because they have a character all their own. You don’t have to be on a par with a Hollywood television series or have their production values to be a compelling wrestling show. All you need is a ring, a decent television crew, talented wrestlers and a passionate audience and you can turn out something that may not ever rival a WWE in production value but can in intriguing angles and great matches. ECW’s legacy is a testament to that fact.

Stardom divides its superstars into factions which produces ready-made angles and storylines. Currently, there are the Cosmic Angels, Queen’s Quest, Oedo Tai, Donna Del Mondo and Stars. Not only is there inter-faction rivalries as well but some superstars have been known to jump ship, which in itself can be very controversial. This provides those “soap opera” elements, those salacious angles that any wrestling promotion needs to set-up matches and fuel interest.

Sorry WWE-only fans, Stardom doesn’t have those flashy, slickly produced segments and promos of the sports entertainment variety. The Stardom talent cut simple subtitled promos backstage and in the ring but they really do all of their talking in the squared circle when that bell rings.

Stardom does have its newbies and curtain-jerkers who are still learning the ropes in and outside of the ring. It is interesting watching those people grow, learn and eventually have their breakout moment. The mid-card and main event talent wrestle matches that are on par with anything in NJPW or even the WWE for that matter. Stars like Bea Priestley, Konami, Giulia, Mayu Iwatani, Momo Watanabe, Saya Kamitani, Utami Hayashishita and others can really wrestle circles around not just most North American women wrestlers but many of the men as well. They are just as hard-hitting, just as tough, just as athletic and just as charismatic. You won’t see any Candice LeRae-style weak chops, punches, kicks or chair shots by these superstars either as strong style knows no gender. 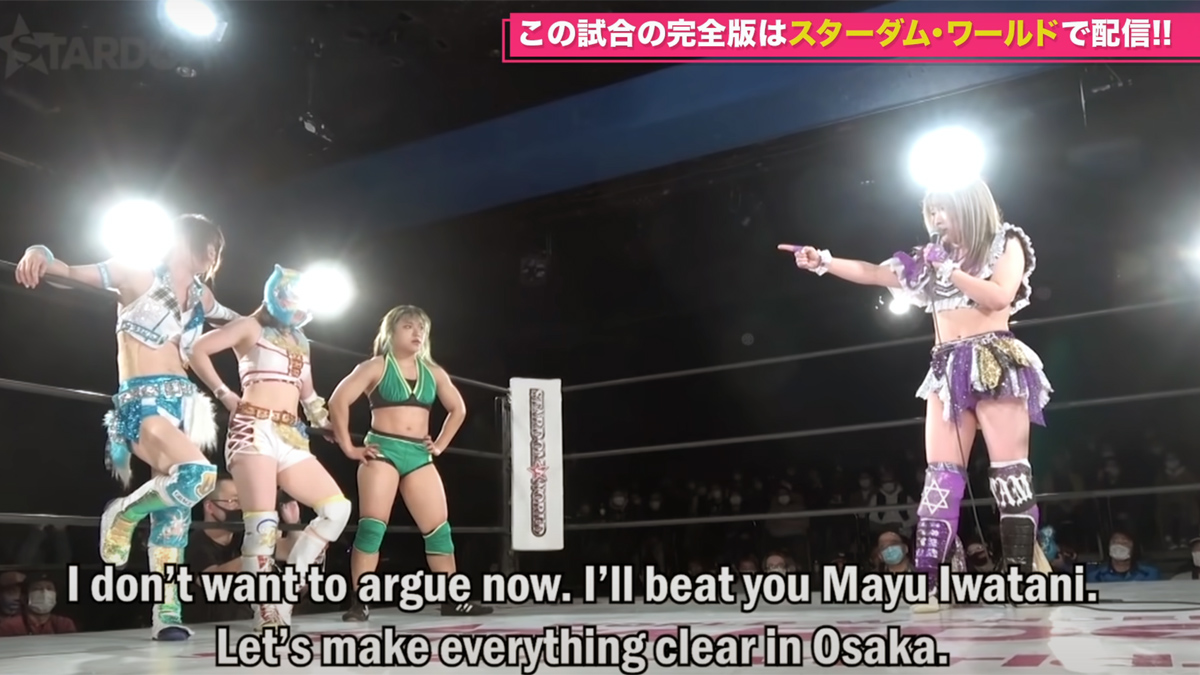 Couple that with the fact that Japanese bookers and the talent traditionally put on more complex, intricate matches that tell better stories in the ring than many of their North American compatriots and you can understand why the promotion has been around for 11 years and why North American promotions keep “poaching” its talent.

WWE-only fans don’t know what they are missing. That isn’t a surprise considering they won’t even give Impact, ROH, AEW, NWA, or MLW a try, never mind any promotion from outside America. For those true wrestling fans, check out Stardom’s YouTube channel or Stardom World to see how really good wrestling can be no matter which public bathroom a superstar uses when not throwing down in the ring. What really matters any way is what is in someone’s heart not what’s between their legs. When we can just talk about wrestling without focusing on identity that is truly when we as fans and the industry will have evolved.