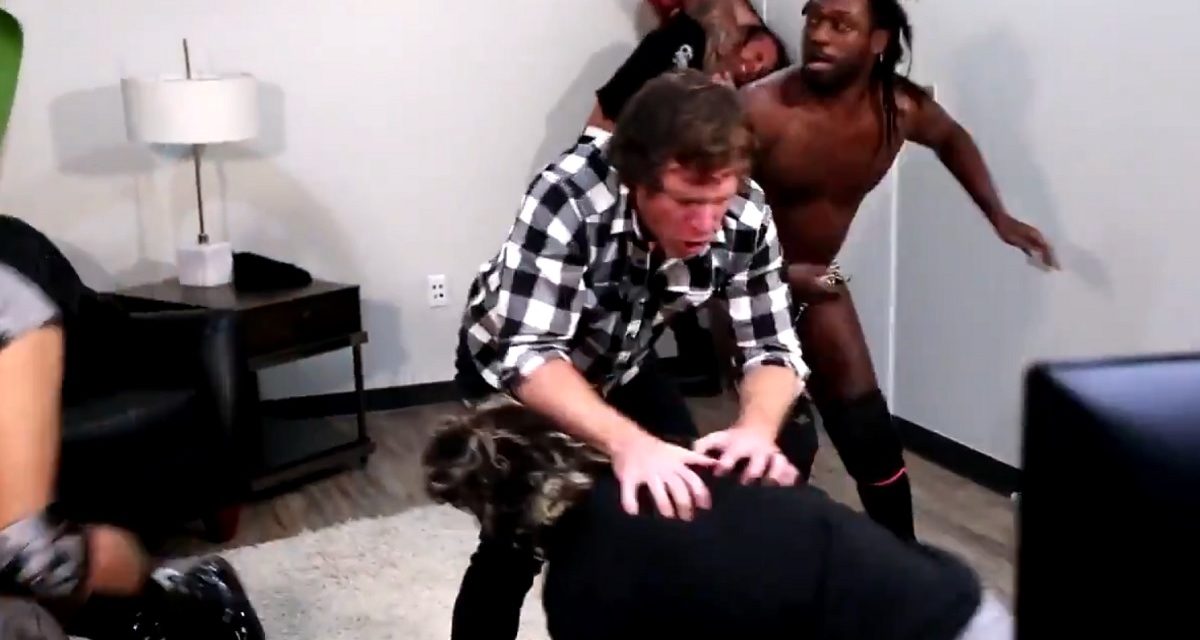 While the AEW-Impact crossover storyline has been a fun build-up – and is certainly being billed as a significant, ground-breaking match, it’s not the only match taking place on this Saturday’s Hard to Kill PPV. Tuesday’s edition of Impact certainly gave it the most prominence – and rightfully so – but it also did a good job of building hype for the rest of Saturday’s card. From that standpoint, as a “go-home” show, this week ticked all the right boxes.

This one was pretty much a brawl right from the get-go, with the two exchanging hard shots. Lee slowed things down with a Rolling Body Scissors and then used kicks to keep Taya in trouble.

Lee went for a Swanton, but Taya was able to get her knees up and Lee crashed hard. Taya Hulked up and hit a big Spear for a near-fall. Taya looked to end things, but was distracted by an attempt by Purrazzo to get involved from the floor, so couldn’t put Lee away. Shortly after that, Purrazzo got involved again, helping Lee get a rope break on a pin attempt. Rosemary had seen enough and stalked Purrazzo around the ring and attacked her on the entrance ramp. This brought out Susan who sucker-punched Rosemary, leading to a double-beatdown. Taya turned around to see her friend in trouble, and got rolled up by Lee for the pin.

Taya always puts on a good match, and this was no exception. Hopefully the match with Purrazzo at the PPV doesn’t get bogged down by the Susan storyline, because the two of them have the ability to steal the show if just given a chance to show what they can do.

Kenny Omega boarded his bus where Don Callis and the Good Brothers were hanging out. Callis noted that they would be on AEW Dynamite tomorrow. They pumped up Karl Anderson for his match against Rich Swann tonight, saying they’ll watch it from the bus, as they and the Motor City Machine Guns will be banned from ringside.

AEW owner Tony Khan and announcer Tony Schiavone did another one of their “paid commercials.” Khan insulted Impact and Schiavone ran down tomorrow’s AEW Dynamite lineup. Schiavone said “tomorrow night, we are going to start the brand new year, 2021, off with a smash,” so presumably he forgot that last week’s show also took place in 2021.

A video package hyped the Barbed Wire Massacre match between Sami Callihan and Eddie Edwards at Hard to Kill. Josh Mathews and Madison Rayne hyped the brutality of the match, noting that the last such match was too violent to air on TV (it was only streamed on Twitch TV).

Match 2: Chris Bey and Rohit Raju vs. Manik and Suicide

Bey and Raju attacked their opponents before the bell, and the match effectively started off as a Texas Tornado affair. Manik and TJP outwitted and out-quicked Bey and Raju, leading to them hitting stereo flying dives onto their opponents on the floor to head into a commercial. Back from break and the ref immediately lost control again and in the ensuing confusion, Bey and Manik took the advantage again. They put the hurt on Suicide for some time, but he was eventually able to tag in Manik. Manik cleaned house, including hitting Bey with a beautiful High Cross Body on each of his opponents, and a few of TJP’s signature moves. Bey and Raju used some teamwork to get out of simultaneous submission holds, and again the ref lost any semblance of control. Raju stopped his attack on Manik to try to pull of his mask and expose him as TJP. Suicide broke that up, but in doing so, wasn’t able to see Bey sneak up behind him and hit the Art of Finesse for the pin.

This was some good quick action, but if they’re going to completely disregard the tag team rules, why bother booking it as such – just make the match a Texas Tornado match and be done with it. Manik not being involved in the fall makes sense going into the PPV.

Backstage, Taya was upset about losing her match, but Rosemary said it was because she wasn’t expecting the Susan distraction. But given what happened, Rosemary assured her that she’d make sure Susan doesn’t get involved in Taya’s title match at the PPV against Purrazzo. Taya said that she would be at ringside for Rosemary’s match against Tenille Dashwood, but Rosemary told her to go prepare for Saturday and that she’d think of something.

Within the first ten seconds, both sides had interfered, so the referee ejected Rhino and Joe Doering from ringside. Deaner was on a tear here, showing off his newfound aggression to Dreamer’s detriment. Dreamer was able to fire back with the Dusty Elbow, and send Deaner to the floor. Out there, Cousin Jake tried to convince Deaner to get out from the influence of Young and remember who he was. But this just earned him a few slaps from Cody.

This was a bit too cluttered with all of the interference, and pretty much served only to reinforce how twisted Cody has become under Young. Doering putting Rhino down so easily should have been given more of a focus, since it positions him as a real monster – but they glossed over that too quickly. Unfortunate.

A video package recapped the Knockouts Tag Team Championship tournament so far. Tasha Steelz and Kiera Hogan face Havok and Nevaeh at Hard to Kill in the finals. The two teams met with Impact Executive Vice-President Scott D’Amore in the boardroom for the contract signing. Steelz and Hogan chirped for a while, until Havok and Nevaeh silenced them by pinning them to the wall by the neck before leaving.

Brian Myers then came into the room and asked D’Amore for a match. Josh Alexander confronted Myers, saying that Myers was only able to beat him by disqualification last time. D’Amore said the two of them should compete in a match that can only be won by pinfall or submission.

Tenille tried to play mind games with Rosemary to avoid a beating, but that strategy was flawed. Rosemary pummeled her with power moves, only letting up when Kaleb interfered from the floor. Rosemary went after him, and he sprayed hairspray into her eyes, blinding her. That let Tenille take over, hitting Rosemary with a few shots, including her signature rope-assisted Neckbreaker and a Low Cross Body in the corner. Rosemary fought back, getting the better of a slugfest, dropping Tenille with a series of Clotheslines, and then taking her to the Upside Down. Rosemary avoided a Spotlight Kick and was going to put Tenille away, when Kaleb interfered again. This brought Crazzy Steve out from under the ring, and he chased Kaleb around the ring and up the ramp.

Tenille tried to use this distraction as an opportunity to blind Rosemary again with the hairspray, but Rosemary grabbed the can from her and blinded Tenille instead, and then hit the Spear to get the win. After the match, Rosemary and Crazzy Steve celebrated and mocked Tenillle and Kaleb.

This was fine for what it was. It looks like they’re trying to reunite Rosemary and Steve, which could be some fun and maybe get Steve some direction since he’s kind of just used randomly these days. The number of distractions from the floor is hitting record numbers tonight – it’s happened in almost every match tonight – and that’s getting a bit tiresome.

In a video message, Rich Swann warned Karl Anderson that when Swann beats him tonight, it will be a preview for the same result at the PPV when Swann and the Motor City Machine Guns beat Anderson, Gallows, and Kenny Omega.

A video package recapped Ethan Page’s mental breakdown, leading to the emergence of his Karate Man alter-ego, who he’ll face on Saturday.

This is a straight match, unlike last week’s Three-Minute Challenge match that Palmer won thanks to the distraction by Willie Mack. Palmer tried with some running Dropkicks, but just got overpowered. Moose threw him around the ring easily, and then battered the hapless Palmer with knees and elbows. He got cocky and in Palmer’s face, and Palmer surprised him with a few knees to the face. Moose quieted that noise with some hard Uranages, and then ground-and-pounded Palmer until he was knocked out.

This was a good dominant win by Moose. Right now, he’s being booked better than anybody else in the company, and it would behoove everyone to keep this up until he faces Rich Swann for the title.

A video package ran down the scheme between Don Callis and Kenny Omega to capture the AEW Championship and the events leading to the main event this Saturday.

During Anderson’s introduction and at a few times during the match, they showed Callis, Gallows, and Omega watching the match on the bus. Meanwhile, the Motor City Machine Guns were shown watching in a lounge, presumably somewhere backstage in the Impact Zone.

Right after the introductions, they went to a commercial. Back from break, and Anderson was in control with a headlock. Swann was able to use his quickness to dazzle Anderson, escape, and take control. A cheap shot by Anderson had Swann hurting in the corner, and then Anderson started working over Swann’s arm, attacking it before, and presumably throughout another commercial break. Anderson took it to the floor, and continued to methodically punish Swann’s arm.

Swann eventually was able to get some distance with a Flying Clothesline, and then avoided a few running attacks before knocking Anderson down with a whirling dervish of strikes and a Spinning Neckbreaker. Anderson avoided a running attack and planted Swann with a Claymore.

Anderson looked to finish him off, but Swann quickly rolled him up to get the surprise pinfall out of nowhere.

After the match, Gallows and Omega attacked the Motor City Machine Guns in their lounge. Swann and Anderson joined the fray, and the show ended with the six of them brawling away.

This was a solid technical match, though it’s not necessarily good for Swann that he won with such a lackluster move. All the hype – even on Impact – has been about how dominant Kenny Omega is and how he’s the greatest wrestler in the world. Having Swann win a little more convincingly may have been a better way to suggest he has a chance at the PPV. Because right now, he looks like he’ll be lucky to even survive the match – not necessarily the best way to present your world champion.

Too many of the matches suffered by interference from the outside, though it made the main event – which banned anyone from ringside – a bit more refreshing. Still, it did sacrifice the quality somewhat. That being said, it was a solid go-home show that highlighted all of the matches for this Saturday’s PPV.