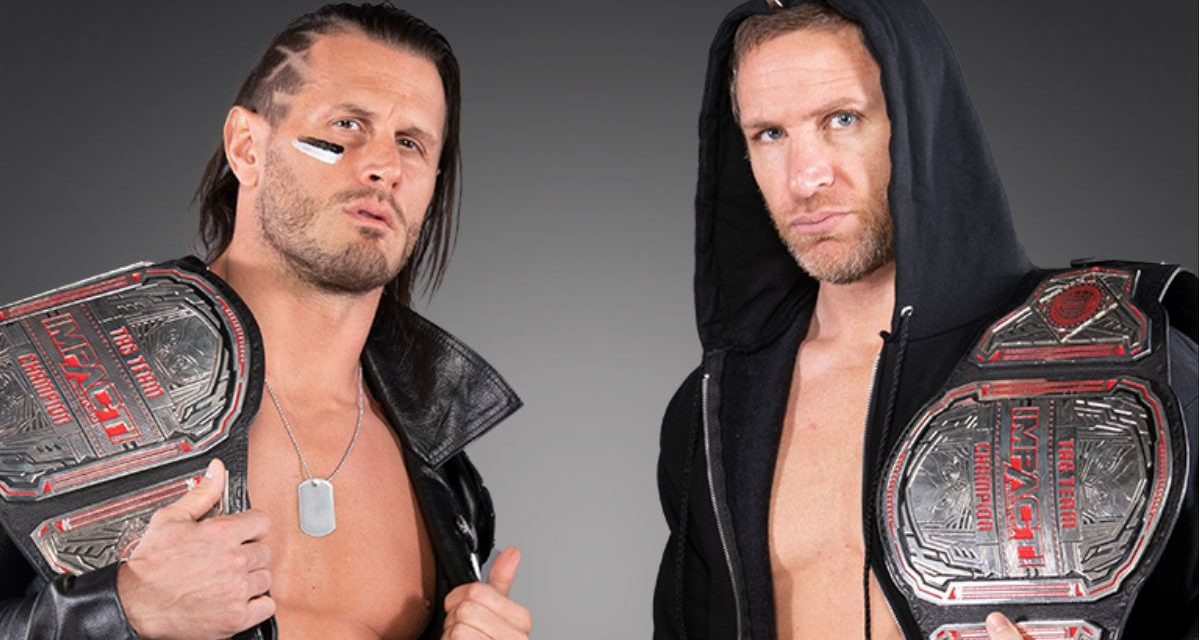 Given some of the questions that Chris Sabin faced during an Impact Wrestling media call on October 6th, one might be surprised to learn that he isn’t a grandfather — so many of the questions seemed about his many years in wrestling.

Yet he’s only 38 years young, with plenty of gas left in the tank.

The proof is the fact that he and long-time partner Alex Shelley — The Motor City Machine Guns — are the Impact Wrestling tag team champions, and are putting the belts on the line on Saturday, October 24th at Bound For Glory, in a four-team battle, defending against The Good Brothers (Doc Gallows and Karl Anderson), The North (Ethan Page and Josh Alexander), and Ace Austin and Madman Fulton.

Right from the start, the call’s host, Josh Matthews, compared Sabin (Joshua Harter) and Shelley to Bill & Ted: “You found a time machine and it’s like you didn’t miss a beat.”

Considering that Sabin has been wrestling since 2000, and first arrived in TNA as an X Division specialist, Matthews has a good point.

Sabin noted that his evolution, and that of the X Division, was by online influences.

“If you just go back and realize what the X Division did was basically just become this melting pot of styles,” he said. “We’re the generation that first started being able to watch wrestling on the internet. So with more people being able to watch wrestling on the internet, they’re exposed to more styles, whether it be, you know, Japanese style, Mexican style, British style, all the different styles around the world. Our generation just became this melting pot of mixing all the styles of wrestling together. And that’s pretty much what the X Division was. We watched everything and tried to make this new style that was a combination of all the best. And I think that’s just kind of like what this new generation is. You see the influence of every worldwide style. And I think the X Division was just the first to do that.”

“I would say both. That’s how long I’ve been around, when you’ve been around for 20 years, I guess you can consider yourself both,” responded Sabin.

Shelley and Sabin, both from the Detroit area, began really teaming in Japan, working for Zero1 in 2006. They’ve also competed together in Pro Wrestling Guerrilla and Ring of Honor. However, it’s in TNA / Impact that the Guns have had the most success. He and Shelley just work, said Shelley. “We’ve known each other for over a decade, we’ve been teaming for over a decade, we’ve known each other for so long. So we can rely on each other. That’s the thing you know, when you have someone you can rely on and you can trust and then that just helps improve your confidence.”

Though it wasn’t always smooth sailing. Sabin has had three knee surgeries and Shelley stepped away for a time for personal reasons and to pursue his education. They have also been in a band together, The High Crusade.

The word “under-appreciated” was dropped by one media member, referring to the previous run of the team in TNA.

“The timing wasn’t right for us back then. Sure, we were tag team champions, and we had a nice little run with the belts, and some great matches with Beer Money [Bobby Roode and James Storm] and some great matches with Generation Me, if you know who those guys are [Nick & Matt Jackson, the Young Bucks]. But you know, again, it just wasn’t that wasn’t the time for us, the atmosphere wasn’t right in this company, for us to really thrive. And it’s now the time is right, obviously. I think people are really excited to see the Motor City Machine Guns return.” 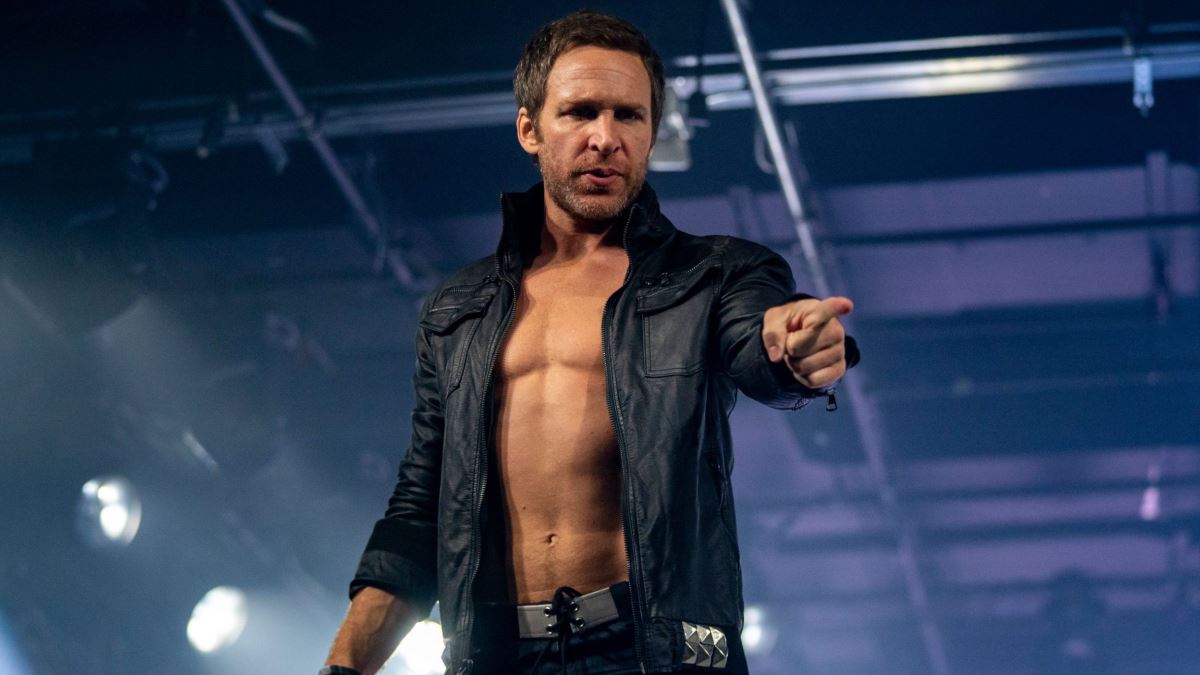 Sabin said that new difference in ownership, from Panda Energy and Dixie Carter running things, to Anthem Sports & Entertainment, was noticeable. “It’s completely different management and, different owners. It’s just the whole environment is just completely different,” he said. Notable, it’s Scott D’Amore, one of his original trainers, who is in charge.

D’Amore has been open to working with other wrestling companies, from Lucha Underground to Mexico’s AAA, to housing young Japanese talent. Recently AEW tag team champions FTR (Cash Wheeler & Dax Harwood) noted that they would like to work against The Motor City Machine Guns.

Bring them on, responded Sabin. “Sure, as long as they come over to Impact Wrestling. They come on over, meet us on our turf, and they can wrestle on our show. And then yeah, I’d be more than interested to wrestle those guys.”

But first, it’s Bound For Glory.

Sabin was asked to break down the competitors.

Q: The Good Brothers, Do you think that one they respect you guys and to their they take you guys seriously?

A: I think they respect us. I definitely don’t think they take us seriously enough, obviously, with just our interaction with them, you can tell they don’t take us that seriously. And you know, I don’t know if I would if I were in their shoes. We’re not very intimidating. We’re not the largest. But the thing is, our skill level is just, it’s a completely different level from everyone else in wrestling. So I’m not worried about that — they can take us lightly, let’s take advantage of that.

Q: The former champions, The North (Ethan Page & Josh Alexander). What’s your what’s your scouting report on them?

A: Basically just go back and watch the couple of matches we had with them, and just study the kind of things that they do. It”s not easy to prepare for three different teams. We’ve got a lot of tape watching to do and a lot of studying to do. Just got to put in the work, and be prepared and be ready.

Q: What’s your takeaway on Ace Austin & Madman Fulton?
A: I think Ace is super talented, but I just think he’s young. And I think that you know, his attitude is the only thing that holds him back at this point. But you know, what can I say? When I was his age I was just as cocky as could be. When you’re that young and you’re on national television wrestling every week, it’s going to go to your head. So can I say I blame them? No, but at some point he’s going to realize that that only holds him back.

There is variety, noted Sabin.

“Each of these teams are unique, especially when you’re a tag team. Like just the chemistry between the two partners is always something unique with any tag team. So yes, I definitely see unique chemistry with all those guys,” he said. “You can just do your best to prepare and watch their stuff. There’s stuff that I’ve never seen before and then I won’t know how to defend against it. So I hope I didn’t just given them some sort of like strategy now to try to come up with stuff we’ve never seen before.”

Fact is that Sabin (and Shelley) have already seen a lot. But Sabin is not ceding the top spot.