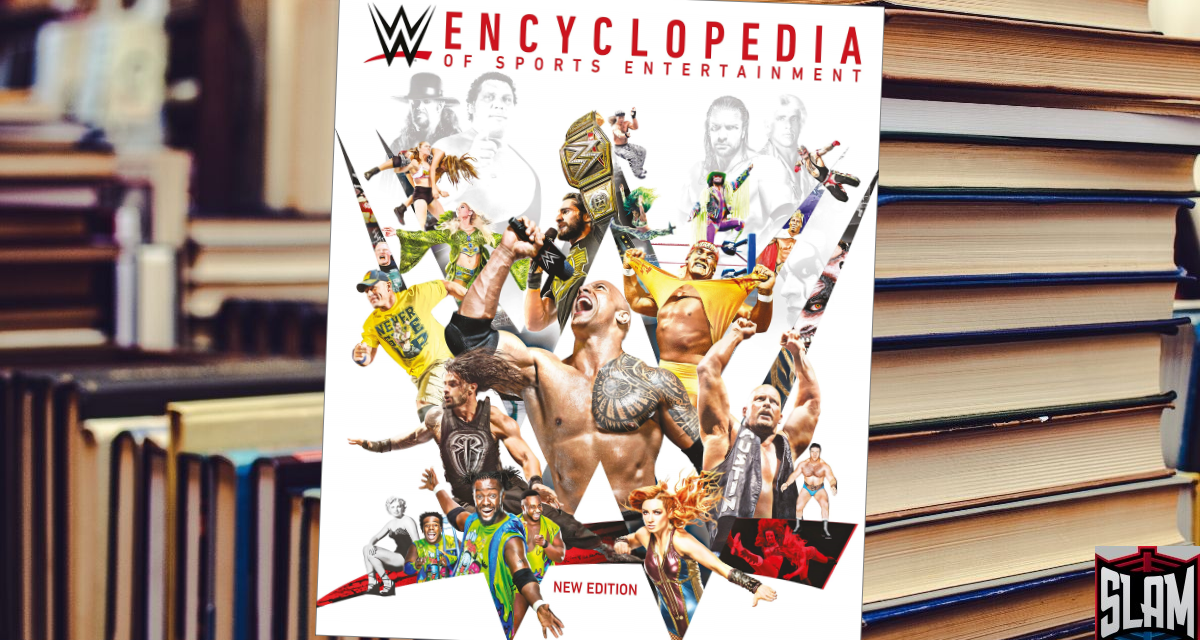 The fourth edition of the WWE Encyclopedia of Sports Entertainment, out now from DK Books, offers great content for new and old wrestling fans alike. Featuring over 400 pages of title records, history, and bios of wrestlers ranging from the popular to the obscure, this book invites us to look inside World Wrestling Entertainment (WWE) and we’re reminded just how weird some of the promotion’s events/story lines and superstars have been. Written by Kevin Sullivan, Steve Pantaleo, Keith Elliot Greenberg, Dean Miller, and Jake Black, the book is all inclusive, with bios of wrestlers and WWE staff alike. Commentators, managers, announcers, you name it, with info on promotions like Extreme Championship Wrestling (ECW) , and titles from the WWE championship to the Canadian Heavyweight championship, the book is jam packed with content from WWE’s extensive history, some you probably forgot existed.

The book is visually pleasing, with a well put together cover showing a diverse assortment of past and present WWE superstars bursting out of the company’s logo. The pages are cleanly laid out, with one or more photos of each superstar placed neatly under or beside their bio. The pictures are mostly from photo shoots, but some longer bios have an action shot accompanying them as well. Certain wrestlers, the big icons of the biz, get bios that span a whole page or more, with much bigger photos, often from the top to the bottom of the page. The pages with promotions or title records on them look great as well, with pictures of the most famous members of the promotion or title holders placed smartly around the page. The book does have a lot of text, but the great organization keeps readers of all ages interested. 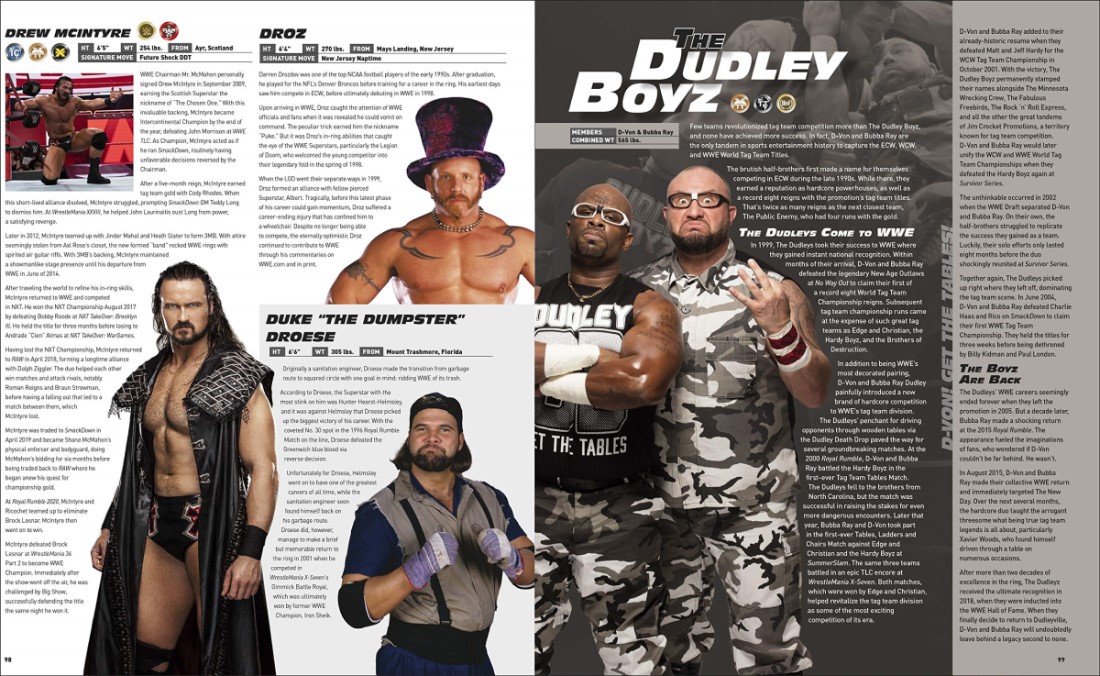 Sample page from the encyclopedia featuring an example of both the standard bios and a full page one. Photo: DK Publishing

The WWE has always shown a willingness to cut people from their history when things went sour, and to put them back in under different circumstances. DK publishing, however, doesn’t share that trait. Instead, they look to provide the complete picture of the history of the WWE. The book provides information on people the WWE has blacklisted, such as Chris Benoit and Enzo Amore, or people they avoid because they’ve gone somewhere else, like Jim Ross or The Revival (FTR). The book also doesn’t “PG-ify” any racy Attitude Era content, which lets fans of that era remember the good old days, and helps people like me who don’t like it remember exactly why I avoid it.

Another interesting part of the book is that it’s largely kayfabe. It occasionally explicitly states that someone quit or was fired, but it always looks to reference a storyline in someone’s departure. For example, “(Insert wrestler here) never quite recovered from the loss, and left the WWE soon after.” The encyclopedic nature of the book means that everyone is included, but this element of kayfabe prevents behind-the-scenes details from being shared. For instance, there is no mention of Hulk Hogan being fired for saying a racist slur during a recorded phone call, and no mention of the Benoit murder-suicide. It’s probable that WWE pushed for the book to be kayfabe, so they could keep those types of details out. 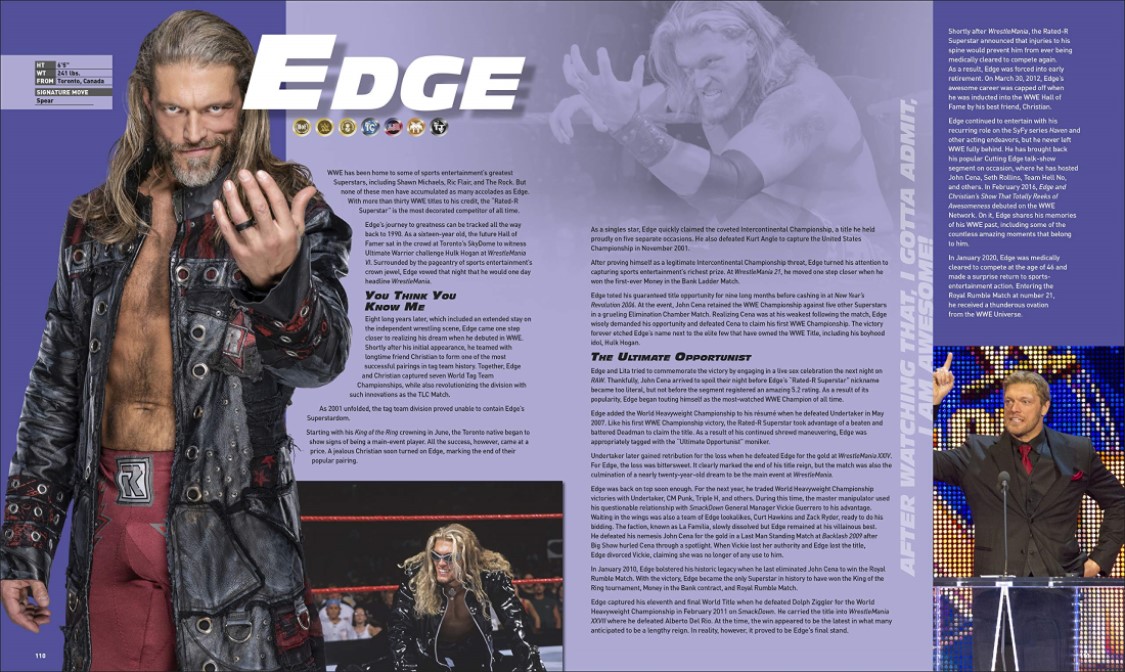 The book is laid out alphabetically, with superstars, titles, and promotions all in one big section. It doesn’t have an index, and the items are sorted alphabetically by everyone’s first names, which is a little bit of a negative, as most encyclopedias tend to have an index and sort items by last name. At the start of the book, there is a legend with icons for all the modern WWE titles, as well as some older ones.  Those icons are placed next to a superstar’s name to highlight their accolades (shout out to pages 62-63, as both of these pages consist of superstars barren of any title achievements!) It was enjoyable having the larger part of the book feature superstars, and then having some info on other pro wrestling promotions and title records being sprinkled here and there, but it could get a little messy. A superstar who has a full page bio in the regular bio section sometimes comes up in the alphabetical order in the middle of a regular page, so their name and the page you can find their bio on is put in its place. I understand that this layout choice is necessary sometimes to avoid repeating information, but the page number is sometimes wrong, which makes things unnecessarily confusing. 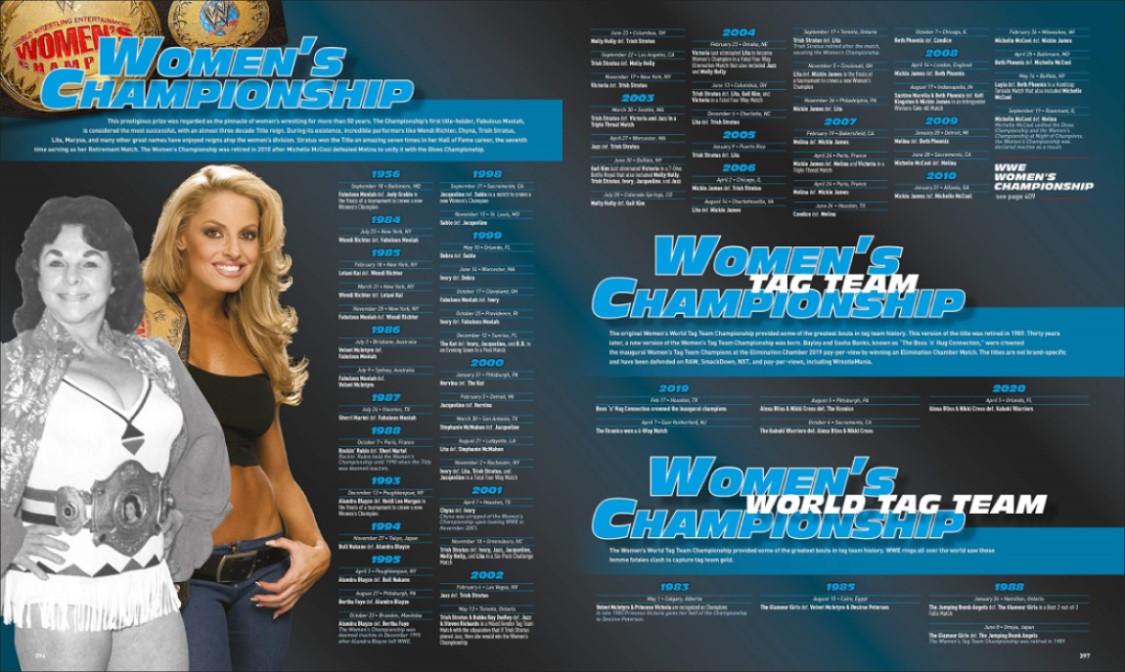 As for further criticisms, there were only a few other concerning typos. For example, Asuka’s finisher being referred to as the “Asuka Tock,” or the Wyatt family missing the word “family” in some of the records, but they aren’t obtrusive and don’t subtract from the enjoyment of the book. Something that made the book feel a little crowded is that it had multiple bios for different alter-egos of a superstar, for instance, a bio for both Isaac Yankem and Kane, or Stardust and Cody Rhodes. It’s probably done that way because the book is kayfabe, so I understand, but I just thought it was worth noting that it crowds the book a little. These multiple bios could have been combined with pictures for people like Rhodes, since it wouldn’t be breaking kayfabe. In fact, it mentions in Rhodes’ bio that he is Stardust, so I don’t know why those bios weren’t combined.

On the whole, this latest version of the WWE Encyclopedia is a really enjoyable book. It’s great for winding down and leafing through to remember the good old days, and also as a professional and credible source of information. I’d recommend this book to pretty much any fan of WWE, as it has something for fans of all eras.