Part of the fun of being a wrestling fan is to reminisce about the memorable characters from the sport’s history. The legendary personas that created memories of a lifetime, and the regrettable gimmicks that people will never be able to forget no matter how much they want to. The WWE Encyclopedia: The Definitive Guide to World Wrestling Entertainment, on bookstore shelves now, is just the ticket for fans looking for a trip down memory lane.

The 350-page coffee table tome is chock full of bios of over 1,000 personalities and full colour photos of WWE superstars and divas from the past and present. In addition to coverage of the talent roster, the book also includes the history of results from the major pay-per-views, and details on many of the WWE’s major storylines. 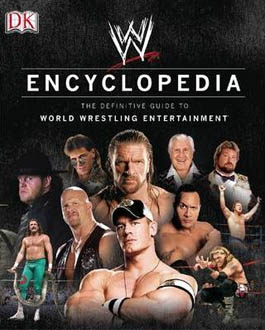 In what some may call a departure for the company, the Encyclopedia doesn’t only concentrate on the person’s WWE career, but in many cases, provides details of each wrestler’s career before, and in some cases after their stint in the company. While as the title suggests this is primarily about the WWE, reading that somebody started in Mid-South, WCW, or ECW was a pleasant surprise and without it would destroy any chance as the book being looked at as a credible information source.

What’s more surprising is that it seems that the normal rules of the company were relaxed for this one as it pertains to mentioning wrestlers that either left the company on bad terms and those who have subsequently been slammed by the company for whatever reason. For example, Alundra Blaze gets a very complimentary writeup, as does the Ultimate Warrior and Randy “Macho Man” Savage.

This is nowhere more evident than by the fact that there is even a bio — including a photo — of Chris Benoit. While no mention is made of the horrific murder-suicide that will forever be linked with Benoit, it is likely the first time the company has ever acknowledged his existence since those events took place.

Historians will appreciate the inclusion of many stars that most casual fans wouldn’t immediately recognize, one prime example being Angelo Savoldi who was not only on the roster but was also at one time a minority owner of the company. Others that might be surprising are wrestlers whose WWE time was quite limited, such as Buzz Sawyer and even the Great Kabuki who only had one match with the company. Rarely seen photographs complement the bios, really adding value to the overall package.

That being said, there are some notable absences from the book as well. For example, the tag teams of Public Enemy, and Doug Furnas and Phil Lafon are excluded, as is Kenzo Suzuki. In flipping through the book, readers will likely find some of their favourites missing. While some of those names may not necessarily represent the who’s who of wrestling (perennial jobber A.J. Petruzzi, for example, or short-lived characters like Reno Riggins and Jamison), others are a bit surprising, like Don Callis (aka Jackyl) who was mentioned in the writeup for Brakkus and the Truth Commission but didn’t get his own entry, Jason Sensation who was part of one of the most memorable segements of the WWE Attitude era, the infamous DX parody of the Nation of Domination, and Chris Kanyon. Of course, while it can be a fun game trying to recall wrestlers who didn’t end up in the book, nitpicky people may find this a bit frustrating, given the title of the book suggests there are no such gaps.Another possible criticism is the fact that the writeups keep ‘kayfabe’ — meaning that multiple personas played by the same people are listed under separate entries (for example, Barry Windham and the Widowmaker are listed separately, as are Shane Douglas and Dean Douglas). While some may scoff at this as being somewhat childish, it does fit the vein of being the ultimate WWE reference source.

In that light, the WWE Encyclopedia is a valuable resource that WWE fans should have in their collection. Historians and casual fans alike will appreciate the thoroughness of the book, and consider it a valuable addition to their wrestling library. For those who love to go to fan conventions and collect autographs, it’s a must.