TORONTO – With its current ownership based in Toronto, it was only natural that Impact Wrestling eventually announce a pay-per-view in the city proper. At a press conference on Monday morning, details of the July 22 Slammiversary XVI show were announced by a number of important faces, both from in front and behind the camera.

The show will be at Rebel Entertainment Complex (formerly Sound Academy and The Docks), down on Toronto’s waterfront at 11 Polson St, 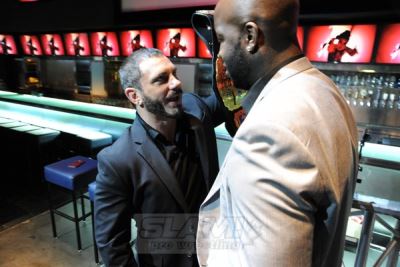 Austin Aries, with his Impact World title, gets into the face of Moose. Photos by Mike Mastrandrea

It will be headlined by Austin Aries defending the Impact World title against Moose, and will also feature Su Yung defending the Knockouts title against Madison Rayne. Aries, Moose and Rayne made up the active talent at the press conference. Also in attendance were Impact president Ed Nordholm, and vice-presidents Don Callis and Scott D’Amore, host/announcer Josh Matthews, retired star and current backstage producer Gail Kim, and Anthony Carelli (Santino Marella), who co-hosts an Impact-themed Twitch show with George “Iceman” Menzies. (Sonjay Dutt, another producer, was there as well, but not on stage.)

Nordholm was the main player in attendance from owner Anthem Sports & Entertainment. Besides local media, fans were invited to attend as well, and they were enthusiastic if not large in number.

By far, it was Aries who stole the show. Verbally quick on his feet, he beat down Moose a couple of times, and had the biggest announcement of the morning.

“Good afternoon. I’d like to say it’s an honour and a privilege to have me here today, because as the Impact World champion, as the ‘Belt Collector,’ my schedule is very busy but I couldn’t pass up this opportunity to match verbal wits with my opponent, Moose,” he began, chastising the former NFL star, pointing out that his football career “is the only thing you have on your resume … this is what I’ve been doing for 18 years. This isn’t my second career after I failed my first.”

The Belt Collector then announced a downsizing.

“After the winner-take-over match with Pentagon Jr., with both titles on the line, I have decided to merge the Grand and the World championship into one undisputed World title, so I will go down in history as the last Grand Champion in Impact Wrestling history and the grandest World champion of all time,” he revealed.

Later, in a Q&A session, Aries further expanded on the decision: “The Grand Championship in its inception was under a different regime, with different rules and a different outlook on the championship titles. Really, once the Grand Championship was put on Josh Mathews, it pretty much had zero value at that point. So I tried to bring a little bit of life back into it, but I think that we all agree at this point there just needs to be one World champion, one undisputed man at the top … and this is the title belt that represents the man, and it’s going to stay right here on my waist for a long time.”

Moose Ojinnaka, known just as Moose in Impact, spent seven years in the NFL, but said that the World title shot was the culmination of a dream. “I’ve worked my entire life for this moment. I’m still young in wrestling,” said the five-year veteran. He guaranteed that he would beat Aries at Slammiversary.

After being asked where a dream match might happen abroad — Moose said Nigeria, where his parents came from — Aries took another shot. “He’s also getting the chance to wrestle somewhere else for the first time coming up, on the 22nd, and that’s the main event. So congratulations on that Moose,” jabbed Aries. 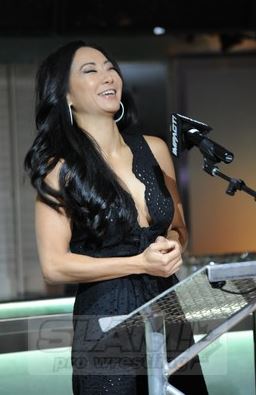 Gail Kim has a laugh.

By comparison, Gail Kim and Madison Rayne were far more appreciative of each other. As Kim headed to the podium, fans chanted “one more match.” She said that wasn’t going to happen. “I wish I could but my body will not hold up,” Kim said.

Being from Toronto, having the upcoming show in town is handy for her, but looking back, Kim said that “Slammiversary has always been such a special pay-per-view for me.”

When Rayne took the stage, she brought up Taryn Terrell defeating Gail Kim in a Last Knockout Standing match with ODB as special guest referee at Slammiversary XI in June 2013, saying the bout has “quite possibly been the catalyst for what the world talks about now as being an evolution for women’s wrestling.” 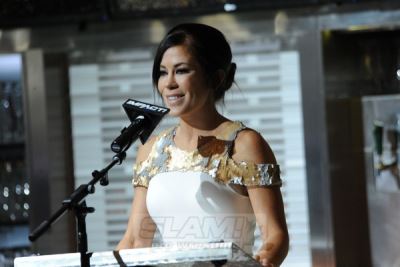 Rayne herself talked about past success, and aims to win the Knockouts title for a sixth time, so she can show her daughter what is possible. She said that Yung might be “the most intimidating presence” of her career. At that point, she paused awkwardly, knowing that a video was to interrupt on the big screen behind her that wasn’t quite cued up properly.

Su Yung was on screen in a pre-taped segment, painted up, getting out of a casket. “Your time has come!” she warned.

Rayne agreed: “Su Yung is right about one thing, my time has come”

Besides tickets being on sale now for Slammiversary 16, Mathews also revealed that “The Bone Soldier” Taiji Ishimori from New Japan’s Bullet Club faction would be at the show, as would Johnny Impact, who was married to Taya Valkyrie on Friday. He appeared on a video, “I’ve been surviving” he said, with a wink, referring to being away taping CBS’s Survivor program.

The other news was more of a hint. A recent viral video had Sami Callihan ranting and raving about not being on the upcoming Chris Jericho cruise (Chris Jericho’s Rock ‘N’ Wrestling Rager at Sea), disappointed that Impact Wrestling was not a part of it.

Callis, D’Amore and Nordholm all weighed in.

“I find myself in an interesting position where maybe for the first time I’m agreeing with Sami Callihan,” said Callis. “Though I question Sami’s tone and I question Sami’s delivery sometimes, I’ve got to say I think there’s something to do. I haven’t talked to Chris about it.” He turned to D’Amore to ask why Impact isn’t on the Jericho cruise.

“Starting off Monday having to agree with Sami Callihan kind of makes me a little bit sick to my stomach, but I certainly think there’s some merit to his comments,” said D’Amore. “We’ve certainly said it since we formed a team to take this company in a new path, that we’re open and want to work with every company out there. You saw that we licensed footage to World Wrestling Entertainment, and broke down that barrier. You saw our relationships with Rise Women’s Wrestling and Destiny and so many other groups, and whether it’s Ring of Honor or whether it’s Chris Jericho’s cruise or anybody else, we’ve always said, ‘Give us a call. Our doors are open. We’re looking to do good business, and bring the fans exactly…” 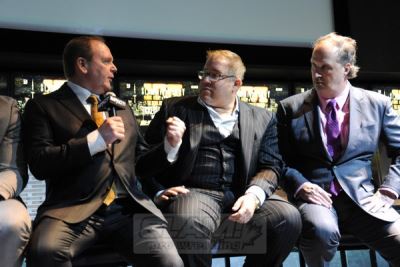 Ed Nordholm tells Scott D’Amore and Don Callis what to do.

Nordholm interrupted D’Amore and said, “You guys are being milquetoast” and ordered them to make it happen.

But, the last word goes to the charismatic champ, who makes up for any lack of size in ego.

What’s on the docket for the champ after Slammiversary?

“After Slammiversary, after I relegate Moose back to the bottom of the totem pole, you know, as I look around, there’s probably only one man that would be able to step up and challenge me, and I think it would be a very entertaining match if I actually got in there and wrestled myself. I think that would be guaranteed at least four-and-a-half stars,” he said. “Outside of that, there’s a lot of talent, there’s a lot of hungry competitors, there’s a lot of guys with chips on their shoulders. I’d like to say that right now Impact’s kind of becoming the place of the miscasts, the misfits, the guys that have been discounted, counted out, not taken seriously. So you have a lot of guys here that maybe have come from other places that have some things to prove, some chips on their shoulder. You’ve got guys like Brian Cage, you’ve got guys that have just shown up, like Killer Kross, you have Sami Callihan, you have Matt Sydal the X-Division champion. There’s so much talent, but I understand that when you have this title belt around your waist, not only are you at the top of the food chain, you’re also the hunted. But I don’t back down from any challenges, so line ’em up.”