Moose meaner than ever as Impact World champ 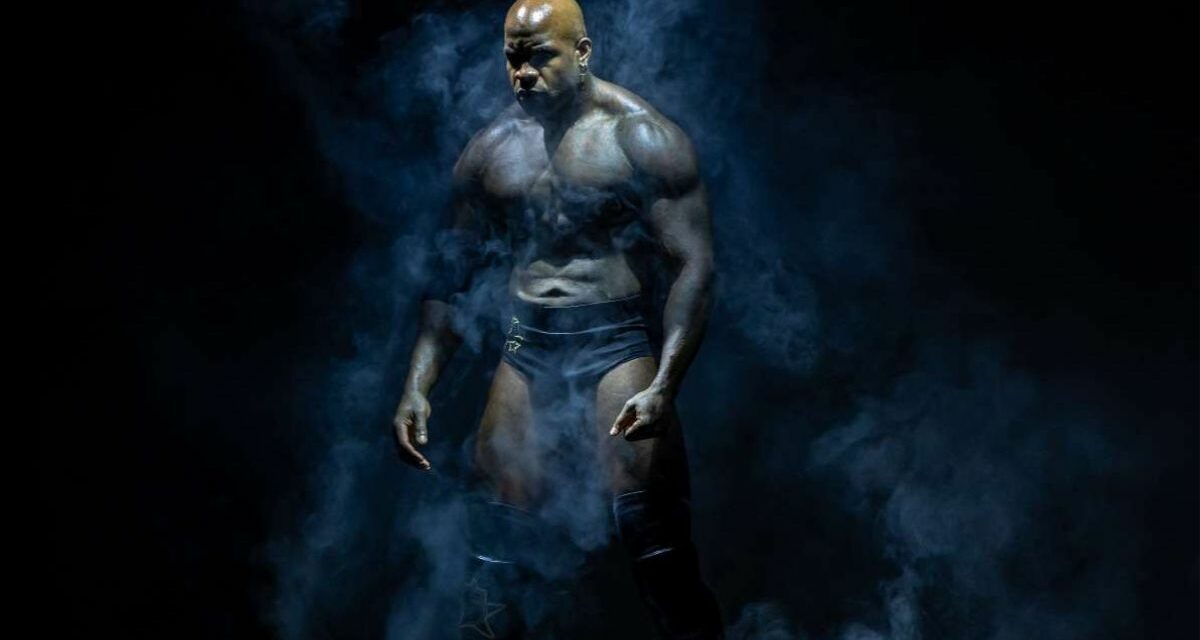 It is safe to say that Moose has overcome the “former football player” moniker that tends to follow pro wrestlers after they leave the gridiron and move to the squared circle. The former offensive guard, who came out of Syracuse and played in the NFL with Atlanta, New England, Indianapolis and St. Louis (2006-2012), has spent the last decade honing his skills in and out of the ring in order to become a world champion.

In a wide-ranging interview with SlamWrestling.net, Quinn Ojinnaka — Moose — opened up about his path to becoming Impact World champion, what it takes to be champ, and whether the timing of his championship win was overdue.

“I’m sure if you asked me that question a couple of years ago, I would have told you that I’m ready to be the world champion, but there’s a reason why the wait was so long. I think I needed to learn a few things,” he said. “I needed to perfect my in-ring abilities and my character before I go and actually become a world champion. Obviously, as a competitor I can be impatient and want everything right now, but the timing needed to be right. Those in control of the show have a better idea of when somebody’s ready to hold that crown and I don’t think a couple of years ago they thought I was ready for it.”

As 2020 brought a change to the world, the wrestling industry also shifted to empty arenas and more cinematic matches. This gave the performers a new experience as they were able to present their art in a new way to the viewers.

“Cinematic matches are easier because it’s not happening live on the spot. It’s kind of like a movie with a bunch of different takes. Everything doesn’t happen in one go. There can be a lot of stop and go while filming,” he explained. “So physically, you’re not really doing much at once because it doesn’t just happen in one go, you know, where a wrestling match is a lot of improvising, a lot of on the spot things in front of the live crowd. So anything can happen. Somebody could get hurt you, You don’t want to screw up so there’s less room for error with a crowd.”

As the world began to have larger gatherings in a bid to return to normalcy, the wrestling world saw a return of live crowds and it was a welcome return for the Impact world champion.

“Oh man, wrestling for the live crowds, It’s awesome. I mean, just if you look at the shows you instantly see the benefits of wrestling with the crowds,” said Moose, referring to Hard to Kill on January 9th. “[That] was a great show for the crowd and from the crowd. They kind of gave us that extra push that we need to get through the entire show. Usually when you’re in the the later part of the show, the last two matches you wonder if the fans are still going to be in it and still going to be strong. The crowd was great and they even stayed after the show and were real loud and rowdy all night. That made our job a bit easier.”

With the return of live crowds came a shift in schedules. As Impact returns to Florida for a set of TV tapings on January 21-22, this could introduce a new set of challenges for the performers as they try to keep a crowd engaged for the duration of the tapings. Moose welcomes the challenge and enjoys the new schedule.

“I think the format that’s going on now is a lot better than what we used to do, when we used to do three or four days of tapings in one week at the same place. That’s kind of hard,” said Moose. “First of all, it’s kind of hard to just sell out an arena, especially when you’re running in that arena three of four days in a row whereas now, it’s only two nights in the same location, which is a lot better… and it’s just better for the crowd and better for them to stay rowdy because it’s not a drawn-out show.”

To reach his potential in order to become world champion, the 6-foot-5, 295-pound Moose challenged anyone, whether they were a crowd favorite or not. This was a welcome opportunity for him, as he doesn’t particularly care about whether the crowd cheers him or boos him.

“I let my work dictate who I am and not some other things like cheap heat. I don’t need to do that. I’ll let my work speak for itself. Obviously, I look at myself as smooth and I don’t try to do anything to make the people hate me on purpose, but I also don’t try to do anything to make them like me either. I’m just myself and they could decide if they hate me or if they like me,” he said. “I’m not one of those guys who gets cheap heat by insulting the crowds or try to forcibly make the crowd like me. Honestly, when I’m out there, I don’t even notice the crowd. It’s almost like I don’t pay attention to what the crowd is doing because I’m out there to hurt my opponent, or to make a point, or to make an impact with my words. I’m just going to be myself.”

As the 37-year-old Moose trains and perfects his art, he had many thoughts about what makes the perfect all-around wrestler. In today’s era of professional wrestling it is safe to say that in-ring performances is only part of the recipe. He echoes that sentiment as he constantly thinks about the entire package of a what makes a great wrestler these days

“It’s not only the wrestling that helps. You also got to think about the promos. No pun intended, but you have to make an impact with everything you do. Your matches, your promos, the way you carry yourself, right?” he said. “I think I’ve been the one they talk about because not only have I been giving you good matches, like the one I had against Eddie Edwards or this past weekend’s triple threat at Hard to Kill, but some of the promos that I’ve been cutting is getting huge outreach. Like the first promo after I won the title, that got 5,000 views on YouTube and Twitter. You know what I’m saying? I’m thinking about the whole package, the way I carry myself, the way I walk, the way I talk.”

With momentum on his side, Moose knew that it was time to take the proverbial ball and run with it. On October 23, 2021, Josh Alexander reached the pinnacle of his career, celebrating a hard fought match and a newly won Impact World championship at Bound For Glory. However within minutes, two lives would change forever as Moose celebrated his Impact World championship win and Alexander looked on from the floor with his back to the ring with his family by his side after the sudden loss, after his initial win over Christian Cage. Moose has no regrets that this is how he became champion. “That’s how I planned it the entire time. That’s how I drew it up once I knew I was going to be in the Call Your Shot Match. I wouldn’t have done it any other way.” 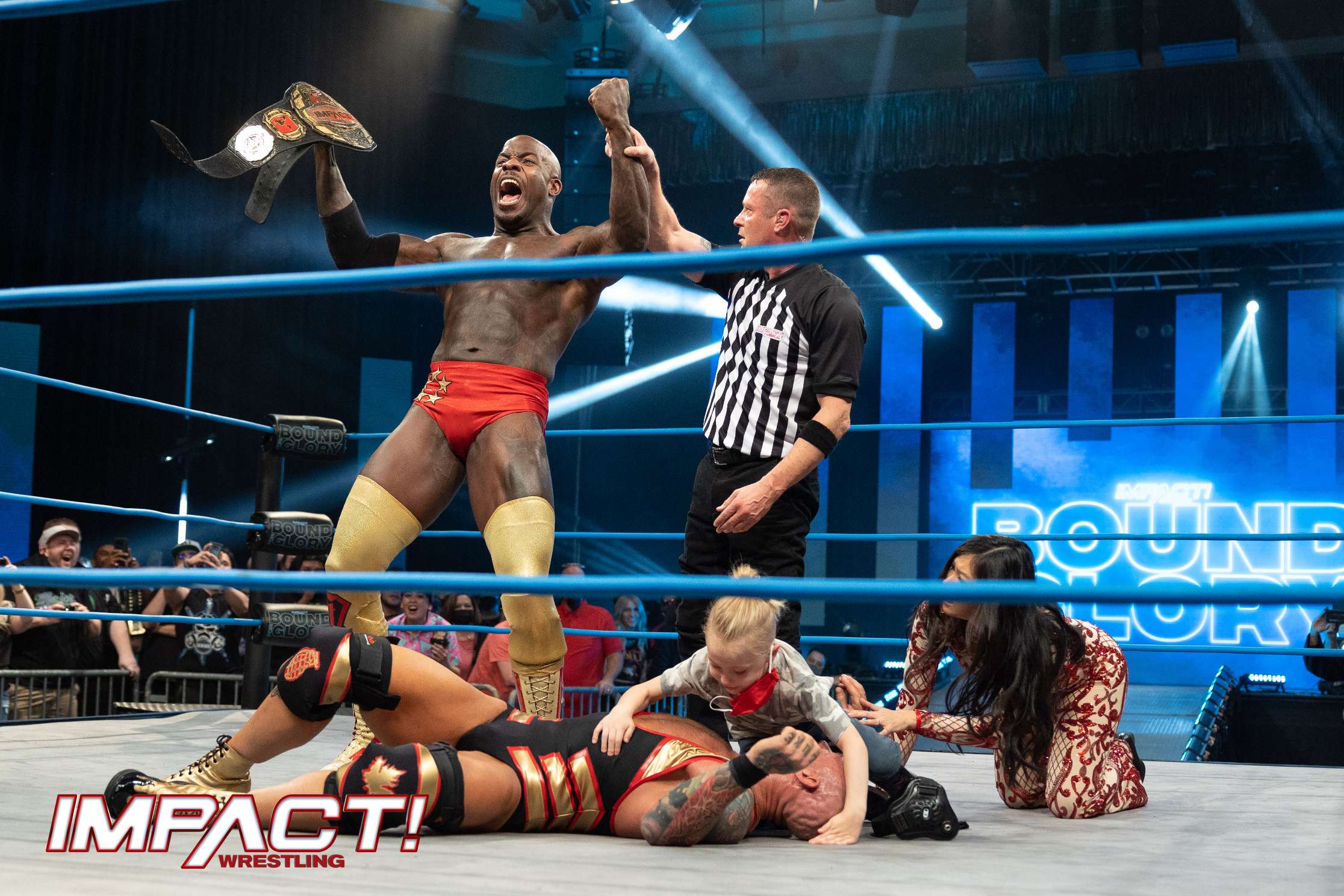 Moose as the Impact World champion at Bound For Glory, as Josh Alexander’s family checks on him. Impact Wrestling photo

Moose knows that Alexander will be coming knocking on his door sooner rather than later. He also thinks that this is one of the biggest matches that the entire wrestling business has to offer right now as it would pit the biggest babyface and the biggest heel against one another to see who is the best of the best in Impact.

“Josh is an indy darling. His work speaks for itself, man. He definitely busted his ass in 2021, especially how he came in a tag team and then to break it up because one of their contracts was up,” Moose said, referring to Ethan Page leaving the successful tag team, The North. “Some people will use this as an excuse to get lost but Josh used it to better himself as a singles competitor and he had a huge 2021.  He is pretty much the biggest babyface in the company, right? So I think it’s inevitable for the match up between him and myself. It’s somebody that is looked upon as the biggest heel in the company (Moose) and Josh being the biggest babyface. I think it’s been a long time since any professional wrestling company has had that. I think it’s been a while since you’ve had that dynamic in professional wrestling and I think Impact is on the verge of having a myself and Josh fight — and I think that’s a matchup everybody wants to see”

But before the battle of titans with Alexander can take place, Moose is welcoming all challengers from anywhere as he sees the “Forbidden Door” as a positive thing. If anything, Impact Wrestling has had the door open the most of all the promotions. “I don’t know what the rules of the Forbidden Door are, and I don’t know if it comes with a manual or what. But yeah, I mean whoever and wherever, I would love to do it. I mean, I’m always down.”

Impact Wrestling open door policy works for Moose, too. “I’m sure Impact is always down to do an exchange for anybody man. If you think about it, it’s Impact that started the whole Forbidden Door trend. So, yeah, I mean, I’m sure the company is always down to do that and we’ll see who is next to walk through the door.”

Moose once again re-iterated his desire to face another world champion. “One match against anybody in the world? I’ll go back to my comment from the other day. It would be Roman Reigns,” he said of the WWE Universal champion. “He’s the face of his company and I’m the face of mine. Let’s take it to the ring and see who’s the best in the world.”

As 2022 unfolds, Moose doesn’t particularly have any long-term goals or priorities for himself. He is a take it day by day kind of guy.

IMPACT Wrestling presents two nights of action-packed live pro wrestling on Friday and Saturday, January 21-22, live at the Charles Dodge Center in Pembroke Pines, Florida. The shows are IMPACT’s first in the Fort Lauderdale area since April 2012. In fact, when the first match starts on January 21st, it will be the first IMPACT show in Fort Lauderdale in 3,546 days. The action both nights will be taped to air on IMPACT’s flagship weekly TV show, Impact!, which airs every Thursday night (8-10 p.m. ET) on AXS TV in the U.S., Fight Network in Canada and Impact Insiders on YouTube.