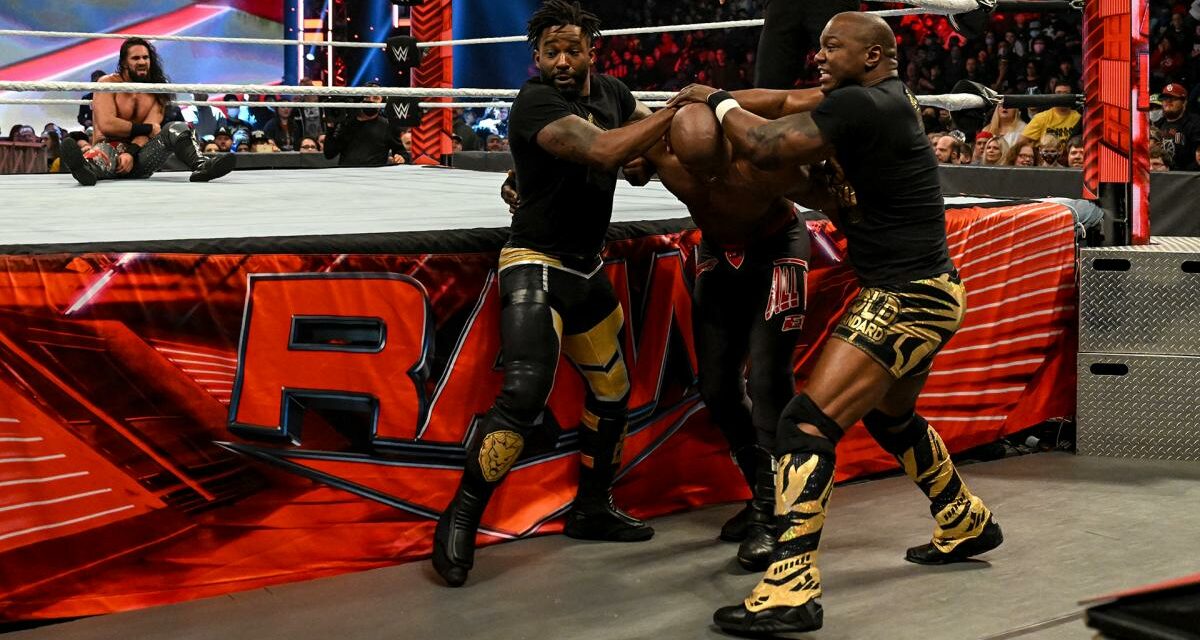 Tonight is the second the last Monday Night RAW before the Royal Rumble. WWE still has work to do to fill out the card. RK-Bro may angle to have their championship rematch at the Rumble, unless they do something about it tonight. Becky Lynch knows who she will be facing for her RAW Women’s title after interfering in the number one contenders match. In fact, that champ will address Doudrop, her opponent, on the show this evening. Into the ring we go.

Big Time Becks kicks off the show talking about all the women coming back for the Royal Rumble just to win a chance to face her. Becky then takes credit for giving Doudrop her shot at the title. She knows the people weren’t clamoring for this. Lynch says that as long as she is running the industry Doudrop will never be champion.

Doudrop makes her way to the ring. If Becky’s plan was to face her, the champ has made a big mistake. Doudrop tells Lynch to stay out of her way when they team up tonight.

Becky Lynch and Doudrop vs. Bianca Belair and Liv Morgan

Why does WWE always insist on teaming up title match opponents in the weeks leading into a PPV? The two are not on the page, as Lynch tags herself in. Doudrop ends up splashing both Morgan and Lynch, even though she isn’t the legal person in the match. So Doudrop drags Lynch to the corner, makes the tag and splashes Morgan again. She covers to get the win.

After the bell, Doudrop hits a banzai drop on Becky in the corner.

Reggie asks Edge for any advice on facing Omos. Edge doesn’t even think Reggie can win. Edge then daps up Damien Priest and like the different side of Damien we have been seeing. Priest has some question about the Royal Rumble match. Edge gives him some pointers. Beth Phoenix is handed a note. It’s from Maryse who wants to meet her in the ring, alone.

Kevin Owens approaches Priest, as he is looking forward to their match. KO wants a clean match and maybe show off their technical skills. Owens doesn’t want the crazy side of Priest coming out.

Owens welcome Seth Rollins to the show. KO gushes over Rollins’ wardrobe. Owens also loves the courage it took for Seth to march into Smackdown and challenge Roman Reigns. Seth tells KO when he wins the Universal title he is staying on RAW. Owen has a big announcement of his own. KO is entering the Royal Rumble match and when he wins, he will challenge Seth Rollins and they will have the biggest match ever at WrestleMania.

Damien Priest puts an end to this love fest. Rollins is not pleased that Priest is encroaching on his time. Priest tells them to shut up.

Owens appears to pull up lame with a hamstring injury during the match. The ref calls for a trainer. Priest walks over, but Owens kicks him in the gut and hits the stunner. Owens covers to get the win after suckering Priest in.

Sarah Schreiber asks Nikki A.S.H. about her plans heading into her match with Rhea Ripley. Nikki tries to spin the narrative that this split and fight is all Rhea’s fault and she is in fact the villain.

The Alpha Academy is holding a graduating ceremony to celebrate winning the RAW Tag Team championship. Awwww, Otis in the Valedictorian. Chad Gable brags about his masters degree that he earned with 4.0 GPA. The crowd wants RK-Bro. Gable bestows on Otis his degree from the Alpha Academy. Otis warns anyone that messes with them to expect pure carnage. Riddle crashes the ceremony, but he has him own cap and gown on. Riddle has his own speech to deliver. Gable wants to know why he is here. Riddle is proud of Chad and Otis. Gable knows he is here to get a rematch, and he will grant one if Riddle and Orton can beat them in an academic competition. Riddle has some questions, but he’s just stalling to allow Orton to slip into the ring and RKO Gable. Riddle takes out Otis on the floor. Orton accepts the challenge.

Austin Theory is still getting lessons from Mr. McMahon. Theory knows he lost week, but he did beat up Finn Balor after the match. Tonight, McMahon wants Theory to beat and then beat up Finn Balor. If he doesn’t, Vince vows to beat the life out of Theory.

Theory takes the words of Mr. McMahon to heart. A back elbow takes down Balor. Theory slams Finn into the ring steps and the security barrier. Balor with a sling blade in the ring, but runs into a clothesline. Balor misses the Coup de Grace. Theory with a drop kick and then hits the ATL. Theory covers and gets the three count.

After the match, Theory gets a selfie and then pummels Balor some more. He hits one more ATL for good measure.

Rhea Ripley tells Sarah Schreiber that she wanted to stay friends with Nikki, but tonight she is going to have to remind everyone who she really is.

Before the match, Queen Zelina and Carmella, the Women’s Tag Team champions walk out on stage. They take credit for Nikki and Rhea breaking up. Nikki attacks a distracted Rhea before the bell can ring. Nikki sends her to the floor and kicks her through the ropes. Rhea is smashed into the ring steps. Nikki heads back up the ramp.

Before the match, Dana tries to give Reggie a pep talk as R Truth, Akira Tozawa and Tamina watch while chomping on some popcorn.

Omos nearly scares Reggie out of the ring with a primal roar. Truth and company run down and Dana escapes through the ring. Omos takes out Truth and Tozawa. Reggie tries to get the jump on Omos, but gets caught in mid air. Omos with the elevated choke slam. He covers Reggie and gets the three count.

Maryse is in the ring to clean up the mess her husband made last week. She asks for Beth Phoenix to come to the ring so they can talk. Beth comes out, but not alone. Maryse asks for their Royal Rumble match to be cancelled. She doesn’t want it, she knows Beth doesn’t want it, and the fans don’t want it. Maryse tries to appeal to Beth with their history. Phoenix tells her to just shut up. Beth doesn’t want to give up the chance to team with her husband and Glam Slam Maryse. Phoenix wants to give her a preview and jumps into the ring. Miz attacks Edge out of the crowd, allowing Maryse to hit Beth in the back of the head with her purse, that was hiding a brick.

The Street Profits says their eight man tag match will be a great way to prepare for the Royal Rumble match. The Mysterios are excited to team with them.

The Street Profits and The Mysterios vs. Dolph Ziggler, Robert Roode, Apollo Crews and Commander Azeez

Yea, this match was a spot fest. The Mysterios hit the Dirty Dogs with a 619 in stereo. Rey then has to save Dom from Azeez with a leg lariat off the apron. In the ring, Montez Ford hits Crews with the Frog Splash to get the pin.

Winner via pinfall: The Street Profits and the Mysterios

Bobby Lashley told Corey Graves on his podcast that Brock Lesnar doesn’t have a soul and that excites him.

Backstage, Maryse and Miz are very proud of what they did to Beth Phoenix. Next week, Miz is going to throw Maryse an extravagant birthday party.

You would think destroying the doctor’s office would get you kicked out of the therapy, but I guess this guy is determined to get through to Alexa. Tonight, he tries some word association. Alexa answers “Lilly” to everything until he says, “imaginary.” Alexa doesn’t say a thing, which scares the doc off.

Cedric Alexander and Shelton Benjamin have not gotten over Lashley telling them off.  Which is a shame, because Seth and Bobby were putting on a show. Lashley is pulled out of the ring by Cedric and Shelton and gets a beat down. The ref calls for the bell.

Lashley fights back with a double suplex and then smashes Alexander into the ring post. A spear sends Shelton through the security barrier. Seth Rollins is stunned by what he is seeing. Rollins should pay more attention to the crowd though. The Usos hop the barrier and slip into the ring. They superkick Rollins and the show goes off the air.

When Monday Night RAW focuses on the wrestling the show can thrive. This is not one of those nights. So many talking segments. The main event was good, even if it didn’t end in a clean finish.