Last month at Ring of Honor’s Best in the World pay-per-view, Quinn “Moose” Ojinnaka made his presence known as ROH’s newest free agent signing. Of course, Moose didn’t just walk up to Ring of Honor and demand a job. Like any wrestler worth a damn, he worked his way up. 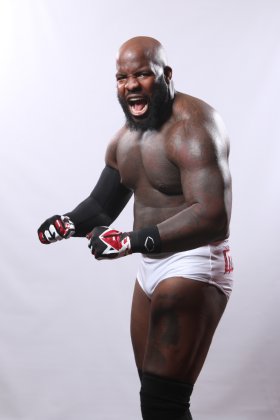 Quinn “Moose” Ojinnaka has got the posing down. Photo courtesy Ring of Honor

Ojinnaka’s journey in pro wrestling officially began in the winter of 2012, a few months after his seven-year run in the NFL ended. He met up with both Uhaa Nation and AR Fox — he considers both men his best friends in the business — and they got him a meeting with DragonGate USA. From there he was able to work enough to earn a tryout with Ring of Honor.

With all of his time playing football, he definitely has a physique that can give him an edge in this business. Standing 6-foot-6 and weighing almost 300 pounds, it’s highly unlikely that the former Atlanta Falcons guard will ever be considered a true underdog when he’s in the ring.

He may have left the NFL, but his old football teammates certainly haven’t abandoned him with the career change. “All my friends in football have been really supportive,” Ojinnaka told SLAM! Wrestling. “One of my good friends, (former Falcons teammate) Brent Grimes has come to see some of my matches. That’s big for me.” Another former teammate, current Arizona Cardinals linebacker John Abraham, has even talked to Moose about the two of them getting in the ring for a match eventually.

Grimes isn’t just a spectator during those matches. Ojinnaka says that Grimes constantly gives him suggestions both regarding in-ring moves as well as additional layers to his gimmick. Moose wouldn’t say exactly what those gimmicks are, but he did say when the timing was right, there’s a good chance we’ll see them eventually. Just don’t expect a complete character change. An avid wrestling fan from his early days, Ojinnaka knows the key to a successful gimmick. “You want to have as much of yourself in the character as possible,” Ojinnaka said. “Moose is simply Quinn Ojinnaka turned up 20 notches.” 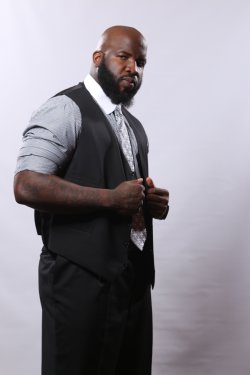 Moose has the stylin’ and profilin’ going too. Photo courtesy Ring of Honor

Of course when wrestling fans hear the words “former Atlanta Falcon” there’s one name everybody thinks of: Bill Goldberg. Ojinnaka wants to be his own wrestler, but he doesn’t mind the comparisons. “I was a huge Goldberg fan in his WCW days,” Ojinnaka said. “If that’s what happens, that’s what happens but I’m not a copy of him.”

Even with Ojinnaka’s raw talent, he’s smart enough to know if he wants to make it in this business, he needs help. When it comes to his actual training, Ojinnaka primarily relies on two different people: Curtis “Big Cat” Hughes does the physical training and “Brutal” Bob Evans provides sagacious advice.

Evans met Ojinnaka last December during a Ring of Honor seminar and the two have stayed in contact since. For the most part Evans helps Ojinnaka out regarding the storytelling of the matches. “He (Moose) sends me tapes, I’ll break ’em down, offer advice usually on the psychology because he’s already an awesome athlete,” Evans said. “I’m not going to pick on the physical aspects.”

That job falls to Hughes. “I was a big guy,” said Hughes, who spent time in WCW, ECW and WWF. “Big guys are easy for me to train.”

One look at both of these men and it’s easy to see why as both have very similar builds. While Hughes never made it to the NFL, like Ojinnaka did, he did play college ball for Kansas State. So far Hughes likes what he sees with Ojinnaka in the ring. “He picks things up fast,” Hughes said. “He’s got all the right tools and everything he needs to make it in this business.”

As for the actual training, those who remember Hughes’ stint at Triple H’s bodyguard, Mr. Hughes, should have an idea of what to expect. But just because Hughes is training Ojinnaka, that doesn’t mean Moose doesn’t have a few unexpected moves in his arsenal. “I’m not going to show all my moves every night,” Ojinnaka said. “When the situation’s right, I’ll pull out some special ones.”

Ojinnaka talked about Brock Lesnar’s shooting star press at WrestleMania XIX as an example. Although Lesnar botched the move and nearly killed himself in the process, the idea of showing off your most athletic move in front of 54,000 people (especially in the ‘Mania main event) was a good idea. Ojinnaka wouldn’t get into specifics, but he did say he does have some aerial attacks he can hit.

If Ojinnaka wants to separate himself from the others, his passion for this business should help a lot. “When you play seven years in the NFL with all the perks, being able to drive a thousand miles for $50, that’s someone who isn’t afraid to pay their dues,” Evans said. “I know Moose was a huge fan who always wanted to do this. That’s what I admire about him.”

As for the next time you can see Moose Ojinnaka in Ring of Honor, he’s currently booked to appear on the July 18 edition, from Cincinnati, Ohio. Of course, there’s nothing quite like seeing a guy progress from a rookie to a seasoned veteran, so if you don’t want to be considered a bandwagon fan if Moose Ojinnaka is a hit, this is your next chance to see him in action. 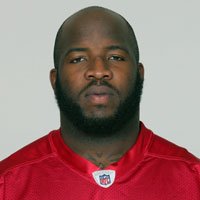 Matthew Asher is a freelance journalist currently living in Atlanta. He first heard of Moose Ojinnaka when he was performing in Duluth, GA and was finally able to meet the big guy at Tulane this April. And yes, he does plan on seeing as many of Moose’s matches as possible.