I was unfamiliar with Kayfabe Commentaries’ DVD series Breaking Kayfabe. I am not completely sold on the concept after viewing my first one but it surely can appeal to a segment of the wrestling fan base. The concept is to go behind the character into the real life of the wrestler; in this case, The Franchise Shane Douglas takes a back seat to the real person Troy Martin who discusses the cost of living his dream as a wrestler.

If you like to watch shoot interviews to learn about the wrestling business and the story behind the matches then it’s not a DVD for you. The two-hour interview, conducted by host Sean Oliver, barely touches on the subject of wrestling stories.

If you are fascinated with the individuals in the business, you might find something there to please you as we learn a lot of information about his youth, his life outside wrestling and his family. If this DVD was part of a book, most of the content would be either in the early chapters or come as a break between the most important part of his wrestling career. 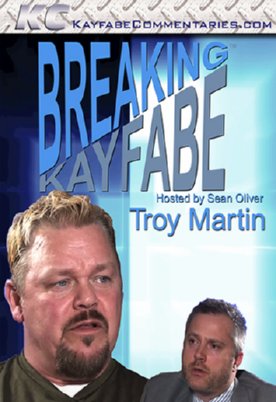 One of the wrestling stories is the recent venture of Extreme Rising and his exit from the company. He makes good points about a wrestling company needing one chief with final decision power. The concept of too many chiefs and not enough Indians has killed more wrestling company than bad bookings. It seem that he still dream of starting a new company and is currently involved with another potential start-up that joins the AAA project on the El Rey network and Jeff Jarrett’s Global Force Wrestling as possible players in the wrestling business in the next 12 months or so.

As an ECW fan, my favorite story was about his time as a teacher while he was working shows as The Franchise during the weekends in 1995-96. He also shares why he never ended up going to medical school.

Other interesting stories are how he fought addiction, how he got married, how he got divorced, and the custody battle for his kids, as well as the strain of taking care of his sick dad. Those shaped the man that is Troy Martin today, good and bad.

You will find a man who still loves the wrestling business no matter what and wants it to reach a new level of success: “I want to see the industry do well.” I think we have man who is happy and at peace with his life and career. There are so many people bitter about the past in wrestling because they feel they “should” have had a better career. It is quite refreshing to see someone at peace. “I have learned to let go of hate,” he simply explains.

At the question who would play him in the story of his life, he gives us Leonardo DiCaprio as an answer. Let me suggest Johnny Depp for the role, as I can clearly see him cutting the promos and throwing down the NWA belt while starting a revolution just the same but I think he would play an even better Troy Martin father, teacher, son and wrestling survivor.