VANCOUVER, BC – It has been often said that in the world of professional wrestling just about anything can and does happen, but every once in a while there is a special moment that transcends and elevates the industry so that it is viewed in a different light. For Elite Canadian Championship Wrestling (ECCW), that moment is July 12, which has been recognized by the Mayor of Vancouver as ECCW Day.

The proclamation was made by Vancouver mayor Gregor Robertson. 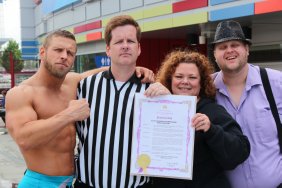 ECCW is owned by three people — Mary Diaz (mother of wrestler Jamie Diaz), and wrestlers Scotty Mac, and “The Natural” Jeff Duncan. Diaz is immensely proud of the honour.

“It shows that we are considered a respectable company with something to give back to the community,” Diaz told SLAM! Wrestling. “The three of us have owned ECCW since September 11, 2010, when we purchased it from Dave Republic. This is possibly the pinnacle our achievements so far. We have come a long way since taking over.”

Having ECCW recognized in this way by what he considers the greatest city in the world is one that Scotty Mac cites as one of his greatest moments.

“I have always been proud of what we were doing with ECCW as far as quality of shows, growth of our fan base, and giving back to the community, but I never expected something like this,” exclaimed Mac.

“Bill Taylor ended up being the one that called me late one night and told me that ECCW Day was in fact happening, and to be totally honest I never thought it could!” continued Mac. “I was shocked, overjoyed and was smiling huge. Wrestling has a bad public perception in the mainstream a lot of the time, and the idea that maybe people will view it in a more positive light because of us is super satisfying. We will continue to contribute our time and efforts to the helping the less fortunate, and continue to put on the best wrestling shows for miles around. I love Vancouver and am very fortunate to live in such an amazing part of the world doing what I am so passionate about.”

The honour has Mac looking towards the future and what kind of doors it may open for ECCW.

“Elite Canadian Championship Wrestling has been on the rise ever since my partners Mary and Jeff and I took it over, and we don’t look back,” stated Mac. “Michelle Starr and Dave Republic started ECCW and I’ll always be thankful and appreciative of those that came before us, but it’s now far and away the best it’s ever been. Talent like Chance Beckett, Juggernaut, and Adam Firestorm will never be forgotten, but our roster is deeper than ever in 2014. We keep accomplishing things that we never expected, such as selling out the legendary Commodore Ballroom twice in six months, and being a part of the Science of Sports exhibit at Vancouver’s Science World. It will continue to be onward and upwards.”

One of the more interesting aspects is how ECCW Day actually came about. As Mary Diaz explains, it was largely due to the company’s association with the Friends for Life Society.

“On May 7 they had their 30th anniversary event at ‘Bingo for Life’ at Celebrities Night Club on Davie Street,” explained Diaz. “I met Mayor Gregor Robertson that night along with Ravenous Randy Myers — our ECCW champ at the time — Lindsay Hart, Bret Hart’s niece, and Bill Taylor, who is our openly gay referee. That meeting got Bill thinking about requesting a proclamation and he took the reins and did all the work researching and doing the appropriate paperwork. Bill was notified on June 25 that the proclamation was approved and we announced it on Saturday, July 6, at Telus World of Science. We were there doing a presentation on the Science of Pro Wrestling.”

Taylor provided his own take on how the ECCW Day came about. “Alright, I think the best thing to do in this is to give you the whole story about how the proclamation came to be,” Taylor said enthusiastically.

“There was a charity bingo night happening, and I knew the Mayor of Vancouver was going to be there, and I thought it would be cool if ECCW reps could get to meet him and get pictures with him and a title belt. So a few ECCW wrestlers went, and everything went as planned, if not better. The mayor seemed to enjoy meeting us. After that, I began thinking of further developing the relationship of the Mayor’s office and ECCW. I knew some arts groups in Vancouver that had received proclamations from the city before, and so I thought this would be something interesting to strive for. After getting the okay from the owners, Scotty and Mary, who actually seemed incredulous and bemused about the whole idea, much less ever getting approved, I followed the procedure for applying for one. After tinkering with the language for a few weeks, I sent the proclamation for final approval by Scotty and Mary who still were rather mystified at this project. It never hurts to try though, right? A few weeks later, I did get a reply. They said YES! I was on Cloud 9! I phoned up Mary and Scotty who were quite stunned. The proclamation was unveiled at a special public event last week. At first, when it was announced, the other wrestlers were like ‘So?’, but I think it had to sink in, the mayor … proclaiming ECCW Day … in order for people to really digest what happened. To be honest, I, and I imagine the whole company, believe there will be definite benefits of this that have not materialized yet. So it’s all very exciting to take it all in.”

One of those still taking in the news is ECCW stalwart and current Canadian champion Tony Baroni. He sees the honour as recognition of all the hard work that everyone has been putting into the ECCW product over the years.

“If the mayor of Vancouver has recognized it we must be doing something right,” Baroni said. “I started my career in ECCW and I’ve watched and been a part of the change that it’s made in the last seven years and the change has been enormous. Everyone has stepped their game up and it shows. As for ECCW Day I’ve got what is likely going to be the biggest match of my career that night so it’ll be just doing my final preparation for that. Light gym, a good stretch, maybe a soak, and get myself limber for a hard-hitting TLC match.”

Baroni is not alone among the ECCW talent who is thrilled about ECCW Day. ECCW Women’s champion Nicole Matthews was very happy about the news. “I think it is just awesome ECCW is getting the recognition it deserves,” said Matthews. “Being a proud Vancouverite, it is so cool to be part of the pop culture scene here. Being able to sell out the Commodore Ballroom really confirms we are fully entrenched in the scene, and having a day dedicated to ECCW further proves that.”

“I’m honoured to change in the same dressing rooms as some of my favourite artists like Beck and Jack White,” said Mac. “It’s a privilege to perform in a building that so many people in Vancouver hold in such high regard. When the event is all over and we’ve sent upwards of 1,000 people home happy, then and only then will I get to revel in what is known as Elite Canadian Championship Wrestling Day.”

Also, on the card will be Colt Cabana in a three-way match with Ethan HD and El Phantasmo; a Mumbia Street Fight for the ECCW tag belts, pitting the champions, The Bollywood Boyz (Gurv Sihra and Harv Sihra) against the G.O.D.S. (Bishop and Sid Sylum with the Natural III in their corner); an ECCW Women’s Championship Match between the champion Nicole Matthews and Veronika Vice; a six-man tag bout with the East-Van Warriors (“The Loose Cannon” Kenny Lush, “Brilliant” Billy Suede and The King of Yukon) against DTA (Jamie Diaz, Jordie Taylor and Daniel Adonis); the first of a best of five series of matches with “Supernatural” Nelson Creed and Artemis Spencer battling it out for supremacy; and a tag match between the Entourage (Pete Powers and Brady Malibu) and The Riot (“Ravenous” Randy Myers and Andy “The Dreadful” Bird). 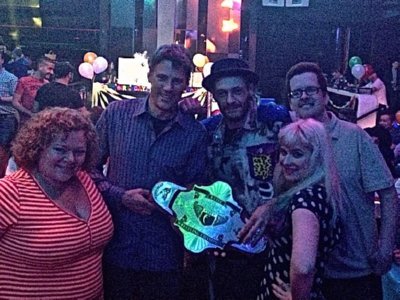 Unfortunately, those wishing to participate in ECCW Day this year live at Ballroom Brawl 2, who don’t already have their ticket, are out of luck as the event has sold out completely. However, for those who can’t be there Scotty Mac recommended checking out some ECCW matches on YouTube to celebrate.

Also, both Scotty Mac and Mary Diaz wanted to let fans know that ECCW will be part of the Abbotsford, BC’s AgriFair from August 1-4 during the British Columbia long weekend and will feature Ted “The Million Dollar Man” DiBiase. As well, there will be a regular ECCW show at the Russian Community Centre in Vancouver on August 23rd, a couple of big shows in October in Cloverdale, BC, and Kelowna, BC with some big names to be announced, and a monthly show in ECCW’s home at the RCC in Kitsilano, Vancouver, BC.

Lastly, there are indications that this may not be the last ECCW Day.

“You’re damn right ECCW Day will be an annual event,” Scotty Mac emphatically stated. “Next year I expect to have more of a fan appreciation type of event attached to it. I’d like to continue to give back to the fans that have given so much support to us.” 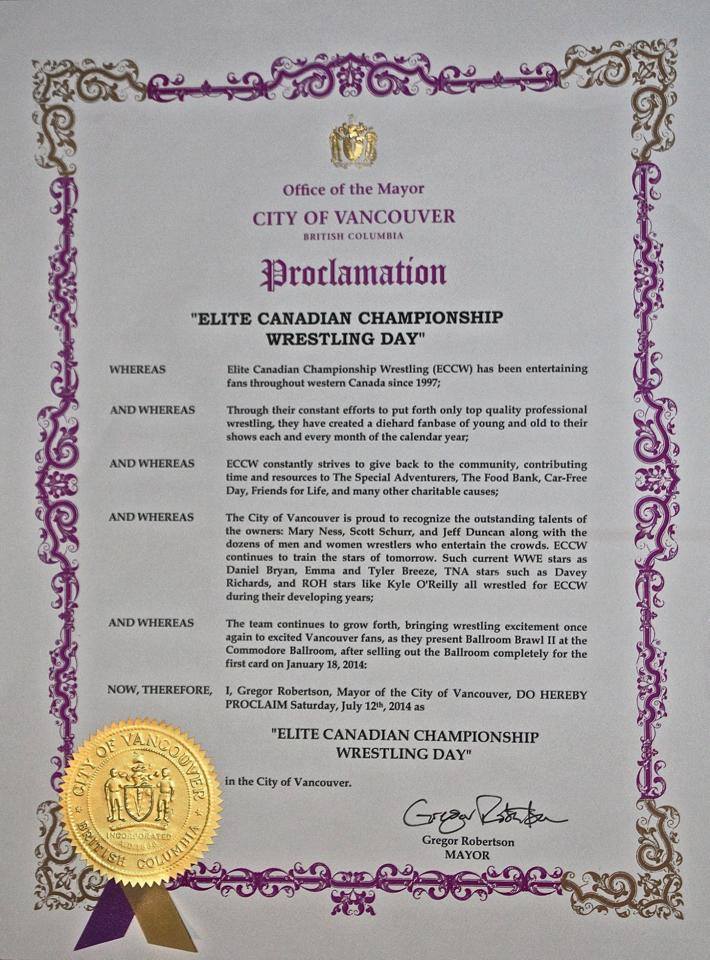