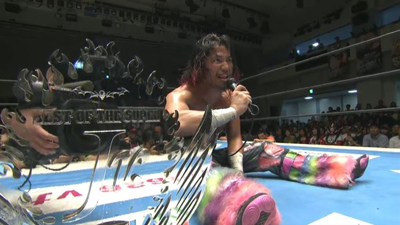 The Ticking Time Bomb has exploded.

The match began with both finalists circling each other and being very cautious. Takahashi’s shotgun drop kick sends Ishimori out of the ring. Ishimori counters the sunset bomb by just flipping backwards off the apron.

Ishimori and Takahashi start brawling on the floor, fighting all the way up the stairs to the top level of Korakuen Hall. Takahashi stomps Ishimori into the ground. He walks all the way across to the other side of the arena, runs and shotgun dropkicks Ishimori. Ishimori though, counters Takahashi’s powerbomb by hurricanrana-ing him all the way down the steps to the arena floor. Ishimori kicked Takahashi in the back as he passed him heading back to the ring. Inside the ring, he put Takahashi in a standing scissors lock and then spun his legs wrenching The Ticking Time Bomb’s neck.

Ishimori took Takahashi to the floor throwing through the first row of chairs. Grabbing a chair, Ishimori strangled Takahashi. An angry Takahashi stood up, tossed the chair aside and scrambled back to the ring. Ishimori placed a prone Takahashi on the second ropes and delivered a wicked sliding German suplex. Thrown backwards, Takahashi’s head bounced viciously off the canvass. Takahashi knocked Ishimori off the top rope to the floor after Ishimori tried to springboard off of them. A sunset bomb off the apron drove Ishimori into the arena floor. Ishimori barely beat the count back into the ring.

Minutes later, Takahashi would pick up Ishimori and slam him wheel barrel style to the floor. With the crowd firmly behind him Takahashi shotgun drop kicked Ishimori into the first row.

Takahashi foiled Ishimori’s handspring off the ropes with a clothesline to the back of the neck. Ishimori locked in his crossface submission move. Takahashi reached the ropes forcing a break. As they stood in the middle of the ring, both men hammered at each other with forearm smashes. Ishimori once again cinched in the crossface and once again he made Takahashi to the ropes. Ishimori landed on his feet after a release German Suplex from Takahashi but was hurled into a corner by Takahashi’s belly-to-belly throw, Suplex. A running clothesline turned Ishimori inside out and a Dynamite Plunger got Takahashi a two count. Takahashi would hurl Ishimori into the turnbuckle with his Running Death Valley and pin him with the Time Bomb finisher.

“Well done, Hiromu. Congratulations. Everybody here is so proud of you and I am proud of you. Well done! You won the Best of the Super Juniors but that don’t mean nothing to me anymore. This proves that I am the best junior heavyweight in the world,” said Ospreay holding up the IWGP Junior Heavyweight Championship belt.

“Hiromu, I have been you twice already. One on one I have the advantage. I thought I was going to be scared but looking at you I know that in Osaka at Dominion, Ospreay leaves with the IWGP Junior Heavyweight Championship and I prove I am the best junior heavyweight in the world,” finished Ospreay dropping the microphone to the mat.

The rest of Los Ingobernables de Japon came down to the ring to celebrate with Takahashi, including their leader and NJPW’s Intercontinental Champion, Tetsuya Naito. Naito will face Chris Jericho for the title at the Dominion pay-per-view this Saturday night.