A scary chat with Rosemary, baby

TORONTO – There have been many a transformation in professional wrestling, where someone does an abrupt left turn and totally alters their character into something unforgettable. George Wagner became Gorgeous George, Dewey Robertson became the Missing Link, Sugarbear Harris became Kamala. Now comes the switch of Courtney Rush into the terrifyingly real Rosemary, current TNA Knockouts champion.

Usually as normal as any girl from Winnipeg can be, the current incarnation of Rosemary is hard to shake, like it has taken her over. Even when not fully done up in her facial makeup and riot gear, Rosemary is steadfast in her desire to stay in character during an in-person interview prior to a SMASH Wrestling show in Toronto at the Phoenix Concert Theatre (billed as her last appearance for the promotion, as she moves to Orlando shortly).

After nine years in wrestling, using the names PJ Tyler, Casey Maguire and Courtney Rush, Holly Letkeman got her chance to join the company then known as TNA Wrestling in January 2016. She was renamed Rosemary and was a scary sidekick to TNA mainstay Abyss and newcomer Crazzy Steve (who she knew from the Ontario indy scene). The trio was named Decay and has stayed a major part of the promotion’s storylines as it was sold and rebranded as IMPACT Wrestling.

“Decay as a unit, Decay as a whole is organic and we’re family,” Rosemary hissed. “We found each other and came together naturally, and then turned our attention outwards into the rest of the world.” 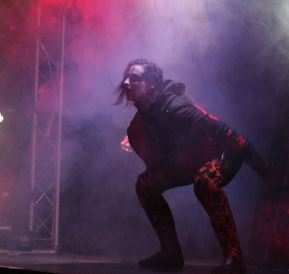 Rosemary heads to the ring during a SMASH Wrestling show in Toronto in early April. Photo by Greg Oliver

She made reference to Decay being “many years in the works,” and it’s true in the sense that it usually takes years of hard work on the indy scene to get noticed, and as important, making friends and connections that will put in a good word for you when the time comes.

One of Rosemary’s benefactors was Eric Young, a fellow Canuck who’d been with TNA for a dozen years before leaving in 2016 for WWE’s NXT product. There, he formed a group called Sanity, which seems an awful lot like Decay.

“Insane, sane, these are labels that are thrown around in the world to try to categorize things that people don’t understand,” she said. “Trust us, Sanity means nothing to us.”

The switch from Dixie Carter and Panda Energy controlling the wrestling show to the current owners in Anthem Sports & Entertainment means little to the character Rosemary, nor does the churning of talent in and out of the promotion.

“The Demon Assassin” said that the elaborate makeup is quite deliberate.

“I think in nature the most dangerous creatures are the most brightly painted. It’s a warning. A poisonous tree frog, it’s the most vibrant green and red, it’s a warning to those who would try to attack it, beware we will kill you. Anyone who tries to take a swing at us, you have been warned, open your eyes and use your senses. You can’t say that we didn’t tell you that we were dangerous.”

It does take a moment to realize that the “we” she keeps referring to isn’t Decay, but herself in a bigger sense.

The unconventional style, hidden weapons and overall creepiness cannot hide the fact that she is a champion, and a deserved one at that. The burgeoning women’s wrestling scene — of which the 33-year-old Rush was a big part of in SHIMMER, NCW Femmes Fatales and other places — really did begin with the TNA Knockouts division and the promotion’s belief in women’s wrestling, letting Gail Kim and Amazing Kong be the focal point of the TV show on a regular basis in 2007-08.

The champ made her closing argument: “We consider it to still be the main women’s belt in the world, because the other ones haven’t faced us, haven’t beaten us. We are unbeaten in IMPACT Wrestling. You go back, we have not been pinned. We have defeated Gail Kim, and she hasn’t been seen since. Jade took three attempts and still couldn’t beat us. Sienna couldn’t beat us. Nobody has pinned us, even in the corner of Abyss and Steve mixing up with other boys in IMPACT, we have not been pinned. Rosemary is undefeated, so if anyone else claims to be the top women’s champion in the world, we beg you, prove it.”